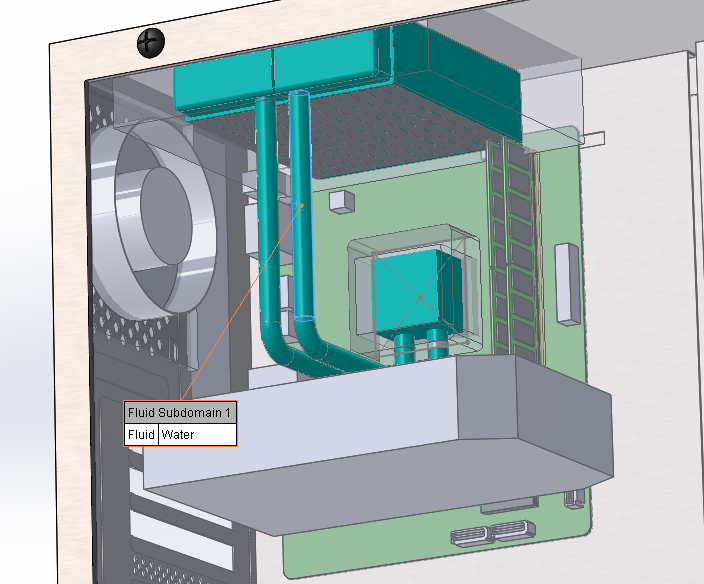 Water Cooling? Sounds intriguing, but can liquid cooling be an effective method for thermal management of a PC system? Short answer = Yes and below I explore this topic using simulation to illustrate how.

I created this water-cooled PC model based on what is typically available on the current market. The design was incorporated such that there was sufficient contact between the cooling plate and the CPU, without the tubes obstructing the RAM slots adjacent to the CPU. A radiator was attached to the roof vent in the case and connected to the pipes. A flow device was used to replicate a pump forcing fluid flow through the closed loop system. The idea being, heat would be transferred from the CPU to the water via conduction which would travel up to the radiator, and transfer heat between air gaps within the radiator, allowing heat dissipation to the surroundings. A fluid subdomain was used to assign the coolant fluid of water inside the system.

How good is the current water cooled PC system?

I wanted to have an idea of how the current cooling method would behave and decided to test its effectiveness in a CFD simulation with the same input parameters as seen in the past blogs. CPU temperature = 72 deg C!! This was worse than the stock cooler in blog 3 [Utilizing CFD to analyse a PC Cooling System]…but why? Well, this was due to poor heat transfer occurring as the water was passing through the cooling block over the CPU. The plate and water did not have sufficient surface area contact to give enough time for the heat to be transferred effectively as the water flowed through the system.

How to improve liquid cooling performance

Add a heat sink. We have already seen the effectiveness of heat sinks in transferring heat in Blog 3. Adding a heat sink would increase the surface area contact with the water flow, as well as slightly impeding the flow allowing enough time for the heat to be transferred to the water.

A key project aim was to design a detailed system model that was simple enough to solve in a timely fashion. Avoiding an over defined mesh when adding small details and geometric complexity to areas of a model, such as adding this small heat sink to the CPU, is always important in CFD simulation. I used regions to adjust the mesh parameters such that the solve time was suitable and provided good accuracy in results.

Once this was done, it was time for another CFD simulation. CPU temperature = 55 Deg C! Here we see the improvements with the addition of a small heat sink. A huge improvement indeed. The rate of heat transfer from the radiator to the surroundings was insufficient to maintain a low water temperature. Which meant that the water was not losing heat efficiently and its temperature continued to rise over time. For this reason the peak temperature did not converge quickly during the simulation.

How can we enhance the water cooling design even further?

Add a fan to dissipate heat more efficiently to the surroundings. Again, this was explored in blog 3, increasing rate of flow and thus improving heat transfer. I decided to change the liquid cooling system fluid used to a glycol water mixture as this is typically the fluid used as coolant and it alleviates problems with water expansion damaging the pipes during colder temperatures. It was also important to consider the roughness on the surfaces of the material. The majority of the casing material was galvanized steel and so this was accounted for using the roughness feature in model data. At this point I solved the model again to see the improvement.

48 Deg C! This is roughly a 15 deg C drop in average temperature, in comparison to the stock cooled PC model running at peak performance, which was a huge improvement and a testament to the capabilities of water cooling. In reality the power levels and ambient temperature will tend to fluctuate, so this temperature could trend up or down depending on these circumstance. However, this is a good estimate of what we could expect the typical temperature to be when running this particular PC with the designed water cooler.

There is room for potential improvement by adjusting the flow rate of the fluid with optimization using parametric studies. It would also be interesting to note the impact of opening the case on peak temperatures.

If you would like to know more about Simcenter Flotherm XT for liquid or air cooled electronics design – try it out for yourself with a free cloud evaluation.

For further insight on how CFD simulation of liquid cooling systems is applied to design of electronics such as servers for edge computing, see this video interview with Iceotope Technologies.

4 Myths about AI in CFD April 6, 2021 As Artificial Intelligence (AI) has become more ubiquitous in our everyday lives, so too has confusion about what it is…
Model-based design from ICEs to ICUs: Bridging the… November 10, 2021 The events of the past few years have turned global attention towards health and, more specifically, healthcare. From the images…
Surfboard CFD - Riding the Digital Wave July 29, 2022 The flip-flop engineering symposium Monday, December 9, 2019, 7 pm. Sunset Beach Elementary School Cafeteria, Oahu's North Shore, Hawaii. Two…

One thought about “Using Water Cooling in Electronics Thermal Management”

This article first appeared on the Siemens Digital Industries Software blog at https://blogs.sw.siemens.com/simcenter/water-cooling-in-electronics-thermal-management/