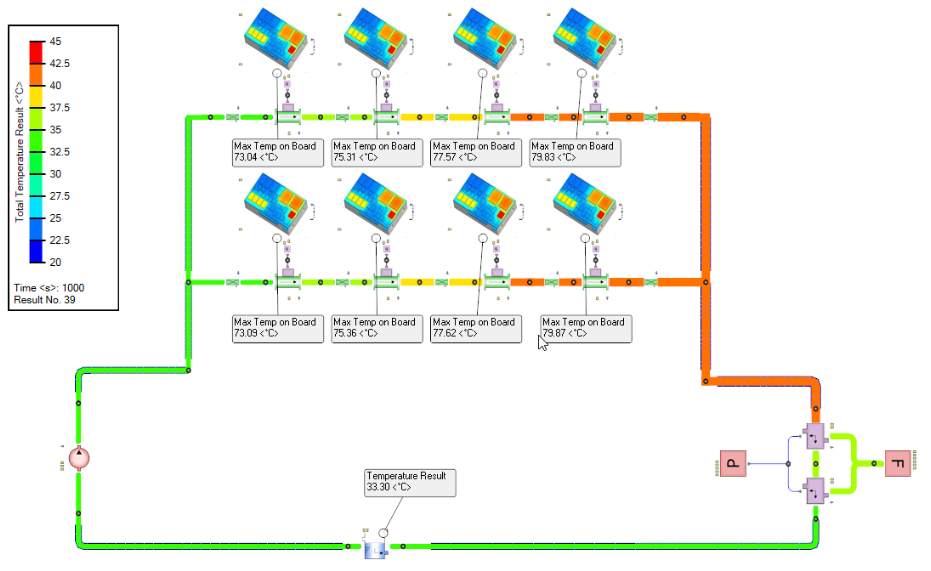 When it comes to cooling electronics, liquid often plays a role. In 1985 the Cray-2 was the worlds fastest computer, cooled with 3M’s dielectric Fluorinert liquid. With x2.5 the thermal conductivity and x1500 the density, these liquids are proportionally better at removing heat, thus reducing heat source temperatures, than more classic air cooled approaches.

Due to the cost and complexity, our smart phones, laptops and gaming consoles of today don’t employ such immersive liquid cooled systems. However liquid cooling has continued to be used, just further away from the silicon heat sources. In data centers liquid based heat exchangers, on the periphery of the data hall or in-line with the racks, are instrumental in the management of heat removal. Coldplates offer the opportunity to bring liquid even closer to the silicon.

Blocks of metal with flow channels inside, cool(er) liquid can be pumped through the coldplate that, when attached to a hot assembly, will be very effective in removal of the dissipated heat.

Coldplate efficiency can be controlled by the flow rate through it and the inlet liquid temperature. Tasked with connecting multiple coldplates together in a cooling loop, there are various topological piping options. Connect all the coldplates in series or all in parallel, or some combination of the 2? In series would ensure maximum flow rate through each coldplate but the inlet liquid temperature to each coldplate would progressively increase along the chain. In parallel would ensure no ‘preheating’ of the liquid, but the flow rate through each would be slashed.

System Simulation tools such as Simcenter Flomaster are well placed to investigate these design options. Using a so-called 1D CFD approach, the full cooling circuit can be studied to determine an acceptable topology and to size the pump.

Legacy approaches for modelling the coldplates in 1D would involve a single heat source representing the entire PCB and a lumped approximation of the coldplate material. Good enough for representing the effect of the electronics on the cooling loop, but not enough to also predict the operating temperature of the electronics, which is ultimately the constraint to be designed for.

Simcenter Flotherm is a 3D CFD+thermal simulation tool designed specifically to predict operating temperatures of electronic assemblies. Until recently these models were not very portable, i.e. they could not be used directly in other simulation environments. Today a Reduced Order Model (ROM) can be extracted from a Simcenter Flotherm model. Retaining the accuracy of 3D thermal predictions, but much reduced in model size, the ROMs are also Boundary Condition Independent (BCI). BCI models retain their accuracy regardless of their thermal environment (peripheral Heat Transfer Coefficients).

The BCI-ROM can be wrapped in an FMU container to enable import into the 100+ tools that support this standard, Simcenter Flomaster included. The FMU(s) of the coldplate and PCB assembly can then be connected to the 1D cooling circuit in Simcenter Flomaster and solved to predict both the liquid flow rates and temperatures AND the operating electronic component temperatures.

As to which of the 3 cooling circuit topologies best met the constraint of maximum PCB component operating temperature, check out this TechTip video showing the entire workflow to find out:

Whereas 1D System Simulation has always been focused on system and system-of-systems applications, and 3D CFD primarily focused on Part and Assembly design, the historic barriers separating these 2 disciplines are being broken down. The accuracy of 3D coupled with the full system accommodation of 1D will further frontload the design process, enabling better simulation informed decisions to be made earlier.

Thermal Influence on Maximum Current Carrying Capacity January 20, 2021 Superconductors aside, anything that conducts electricity will dissipate heat. The more current that flows, the more heat is dissipated, the…
Demystifying Electromagnetics, Part 1 - Fields and Analogies March 2, 2021 This blog series will strive to demystify (low frequency) EM by way of pictures and analogies, with as few equations…
Demystifying Electromagnetics, Part 8 - Losses September 8, 2021

This article first appeared on the Siemens Digital Industries Software blog at https://blogs.sw.siemens.com/simulating-the-real-world/2020/11/03/how-cool-is-that-a-1d3d-approach-to-simulating-liquid-cooling/