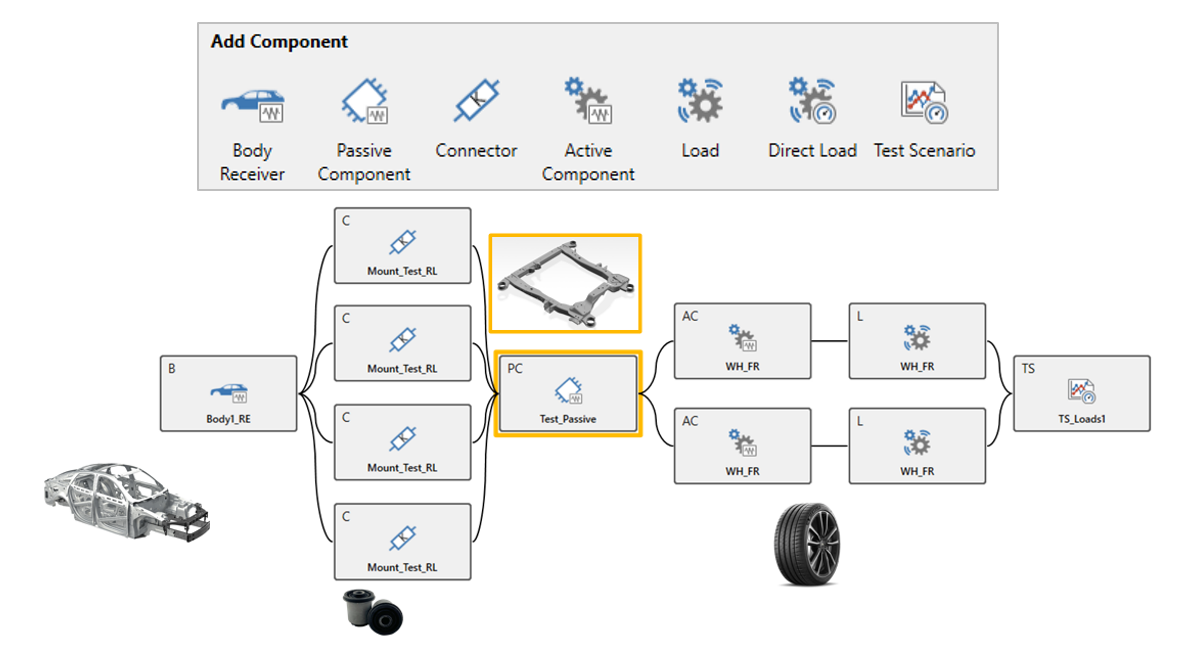 Five centuries ago, if Leonardo da Vinci wanted to design a new product or a new idea, he would have to draw it on a piece of paper, start building the first prototypes and then validate his ideas. Ever since those times, we are tied up to physical prototypes.

Following the definition from the UXL Encyclopedia of Science, a ‘prototype’ is “an initial model of an object built to test a design. (…) A prototype is a vital part of the design process because it allows designers” and engineers “to see the product in action, so they can see what works and what does not.”

As NVH engineers, we are always eager to understand the behavior of the products we are building and their performance. Until a few years ago, we relied purely on physical prototypes when creating new products. These are typically built in the later stages of the development cycle when the design of the components is already fixed, the cost of modifications is high, and time is scarce.

Tackling it before prototyping it

But what if, instead of waiting for the first batch of fully assembled physical prototypes to be ready for testing, you could also start the evaluations of your prototypes virtually, by combining test and simulation-based components?

Well, with the latest release of Simcenter Testlab it is already possible!

This is the aim of the Virtual Prototype Assembly, or simply VPA, available in the Simcenter Testlab 2206 release. With VPA, Test and Simulation engineers can quickly explore the performance of several assemblies without the need for a physical prototype. This allows for design updates in the early phases of the development cycle.

In the new release of Simcenter Testlab 2206, the capabilities of VPA are expanded, allowing the users to create more detailed Virtual Prototypes, or in other words, Digital Twins.

Take vehicle Road Noise as an example; engineers responsible for this attribute want to investigate not only at the level of the loads exchanged at the interface of tire–knuckle, but at any level of the suspension. To make this possible, in this release a new component type is included, the Passive Component.

The Passive Component is a representation of intermediate structures between sources and receiver. An easy example of such a component is a vehicle sub-frame, rear axle carrier or compressor pump, or transmission brackets. With this component type, it is possible to perform Multi-level Substructuring, which is fundamental for the assessment of complex systems.

With the Multi-Level Substructuring approach, one could investigate the impact of any component on the assembly, being able to replace them independently with new component versions, coming from Test or Simulation.

Modern machines operate in a broad variety of conditions, where load interactions depend on multiple boundaries, such as torque, speed, temperature, etc.

With VPA, not only the complexity of the assemblies was increased, but the loads and test scenarios are also supporting multiple tracking dependencies. This means that the forces and moments can depend on multiple variables, such as rpm, torque, preload, etc. Taking as an example an Electric Drive Unit (EDU), the blocked forces can be modeled as orders in the function of the EDU rpm, as well as the discrete torque levels. The data set is stored in a single Load component and is accessible in the virtual assembly based on the used test scenarios.

This additional feature in VPA is particularly suited to evaluate non-trivial driving scenarios, typically resulting from the control logic, for example in Hybrid-Electric vehicles.

Complex systems are typically excited by multiple sources of noise and vibration at the same time, and it is needed to investigate what their overall performance will be when combining all of them together.

With large and complex structures, composed of several components coming from different teams, it can be common to lose track of all the components’ sources, versions, types, etc. To allow you to overcome this challenge and consistently organize your database of components and assemblies, the VPA datasets are now tightly integrated with Simcenter Testlab Data Management. By centrally storing and managing data, users can easily search on the component model database and automatically load and use the components in the VPA Assembler application.

Can we move towards zero-prototype development?

This is definitely the vision, looking at the trends and challenges across the industries. And the enhancements in the VPA solution are providing an additional building block to get there fast!

Want to learn more? Contact our local office for more information about the Simcenter Testlab VPA.

This article first appeared on the Siemens Digital Industries Software blog at https://blogs.sw.siemens.com/simcenter/simcenter-testlab-2206-vpa/