I have written several articles in the past twelve months about the need for new parasitic extraction techniques at advanced nodes. At 20 nm, double patterning entered our lives, introducing another possible source for parasitic variation that necessitated new techniques for efficiently computing interconnect corners for parasitic modeling and electrical sign-off. That was followed by FinFET devices at 16 and 14 nm. These devices have very complex 3D geometries that require new field solver techniques to model the electrical interactions and accurately quantify the device and parasitic capacitive effects.

Today, however, we are going to jump in the WABAC machine and see what’s happening at older technologies, and the innovation there that is also driving advanced modeling techniques. The designs I want to discuss involve circuits utilizing micro-electromechanical systems (MEMs). MEMs are not unique to a particular process node, but a lot of interesting work is being done at specialized 65 and 90 nm integrated circuit (IC) process technologies.

MEMs devices are designed to detect motion and deliver an electrical response. This response is monitored and leveraged across a wide range of industrial and consumer applications. You will find these devices in your automobile, smart phone and/or tablet, and video game controllers. MEMs do not utilize traditional IC components such as transistors, diodes, resistors, or inductors. Instead, MEMS consist of highly calibrated structures, as shown in Figure 1.

MEMs processing techniques typically leverage a combination of traditional dielectrics and airgaps to achieve a specific dielectric constant. This processing in combination with layout techniques allows MEMs designers to establish capacitive structures that are critical for the operation of the circuit. When the device is at rest, there is a “steady-state” capacitance between nodes in the devices. When the device is in motion, the capacitance will vary, which is detected by sensors in the structure.

These sensors pass information to an analysis engine that can determine how fast and in which direction the device is moving. MEMs structures are incredibly complex, with high degrees of variability. Different structures are built to detect vertical motion, horizontal motion, rotational motion, etc. Figure 2 illustrates one possible configuration, but the variation in the layout and the processing is limitless. 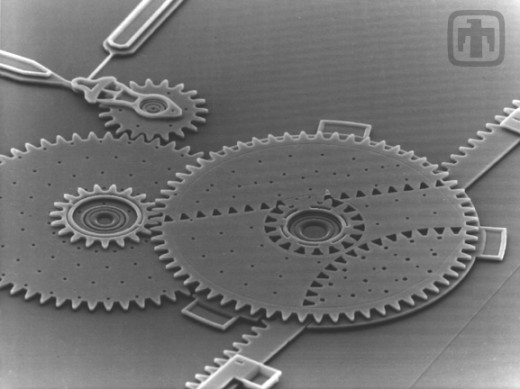 Naturally, with circuit performance driven by capacitance values, accuracy in these calculations is highly critical for MEMs designers. While designers have several options for calculating capacitances, not all of them are suitable for use with MEMs:

Calibre xACT 3D is an example of a fully-deterministic field solver intended for designer use. It has the performance and capacity to fully extract MEMs devices, it can model both the complex layout and the mix of dielectrics and air gaps, and it is wholly deterministic, producing accurate results without statistical error. We have worked with several companies to implement effective, accurate MEMs extraction, a process whose use should continue to grow as the industry continues to find novel applications for this technology.

Author
Carey Robertson is a Director of Product Marketing at Mentor Graphics Corp., overseeing the marketing activities for Calibre PERC, LVS and extraction products. He has been with Mentor Graphics for 15 years in various product and technical marketing roles. Prior to Mentor Graphics, Carey was a design engineer at Digital Equipment Corp., working on microprocessor design. Carey holds a BS from Stanford University and an MS from UC Berkeley. He may be contacted at carey_robertson@mentor.com.

This article was originally published on www.eetimes.com

DAC in December?? A Review of Calibre Design Solutions at… March 3, 2022 Did it feel a bit weird to be submitting research papers for DAC 2022 while packing to go to DAC…
Ease on down the road…why “ease of use” is the next big… March 16, 2022 Ease of use is an important issue when enhancing product functionality and introducing new technology. Calibre Design Systems considers ease…
Extracting parasitics from MIM/MOM capacitors doesn’t have… April 4, 2022 By Claudia Relyea and Sandeep Koranne  Analog/RF designers need both the speed of rule-based PEX, as well as the capacity…

This article first appeared on the Siemens Digital Industries Software blog at https://blogs.sw.siemens.com/calibre/2015/02/12/what-about-mems/