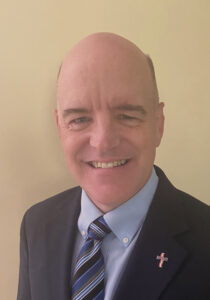 At the IEEE Standards Association’s 2022 winter awards ceremony, Tom Fitzpatrick was honored for his leadership in standards development and stewardship with the IEEE Design Automation Standards Committee’s (DASC) Ron Waxman Meritorious Service Award.  The award was named after the DASC’s founding chair and we were thrilled to have Mr. Waxman in person to help present this award.

More than 25 years ago, Tom started his standards journey as a member of the Verilog standardization team.  As Accellera’s SystemVerilog standards technical committee was proposing additions to complement Verilog, Tom joined that effort and continued his participation in IEEE P1364.  He eventually became chair of the IEEE 1364 Working Group.  His leadership of IEEE P1364 resulted in a smooth integration of the IEEE Std. 1364™-2005 standard with the next revision of IEEE P1800.

Today, Tom chairs the IEEE P1800 working group where the legacy of Verilog continues to thrive in the larger SystemVerilog standard.  He has expanded discussions within the IEEE P1800 Working Group to address revisions to the standard to better support analog/mixed-signal (AMS) designs.  He has strengthened the interactions with the relevant Accellera technical committees defining SystemVerilog AMS that demonstrate his excellent leadership and sustained commitment to Verilog.

That commitment is also seen in his long-standing championship of the Universal Verification Methodology (UVM) that was built on top of IEEE Std. 1800.  He participated in the IEEE P1800.2 UVM Working Group since its inception when UVM was transferred from Accellera to the IEEE Design Automation Standards Committee (DASC).  Tom has a long history of incubating standards in the Accellera System Initiative where he has held several technical and leadership positions and continues his work there on things that will someday become additional IEEE DASC standards.  Within Accellera, he chairs the working group developing AMS extensions for UVM, known as the UVM-AMS Working Group, and is vice chair of the Portable Test and Stimulus Standard (PSS).

To help bring all these standards to life, promote industry adoption, and foster learning by design and verification engineers, he holds leadership roles in many of Accellera’s Design & Verification Conferences and the IEEE Design Automation Conference.  If you attend a DVCon or DAC, you will probably run into him. At DVCon U.S. 2023, Accellera has sponsored a workshop on Applications of the UVM-AMS Standard that will share details on the status of this emerging standard where you can see him!

You can catch a few glimpses of Tom during the IEEE SA’s award ceremony video highlights from the IEEE’s YouTube channel below.  Tom continues to have a profound impact on the worldwide electronics industry through his dedication to create, support, and promote industry standards. Congratulations to Tom on this honor and we look forward to what he brings us next!

Leave the House With a Clean Design September 14, 2021 Wouldn't it be great if there were something that would stop you from leaving the house wearing mismatched clothes -…
Clearing the Fog of ISO 26262 Tool Qualification April 13, 2022 Introduction Developing products to the ISO 26262 standard requires many activities across multiple disciplines. One of those activities is ensuring…
Getting your Safety Architecture just right February 4, 2022 Introduction In a recent industry survey, roughly 40% of ASIC and FPGA project starts had functional safety part of their…

This article first appeared on the Siemens Digital Industries Software blog at https://blogs.sw.siemens.com/verificationhorizons/2023/01/25/ieee-honors-tom-fitzpatrick/