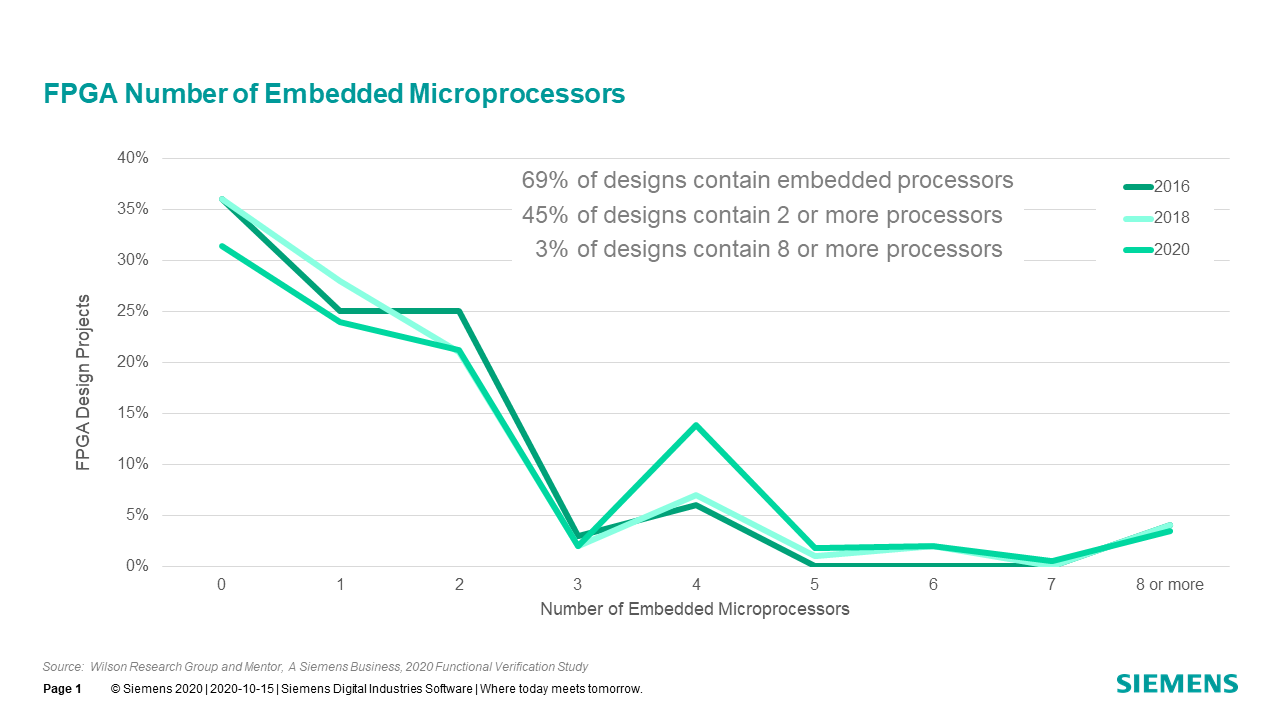 In this blog, I present trends related to various aspects of FPGA design to illustrate growing design complexity.

Historically, FPGAs have offered two primary advantages over ASICs. First, due to their low NRE, FPGAs are generally more cost effective than IC/ASICs for lowvolume production. Second, FPGAs’ rapid prototyping capabilities and flexibility can reduce the development schedule since a majority of the verification and validation cycles have traditionally been performed in the lab. More recently, FPGAs offer advantages related to performance for certain accelerated applications by exploiting hardware parallelism (e.g., AI Neural Networks).

The IC/ASIC market in the mid- to late-2000 timeframe underwent growing pains to address increased verification complexity. Similarly, we find today’s FPGA market is being forced to address growing verification complexity. With the increased capacity and capability of today’s complex FPGAs and the emergence of high-performance SoC programmable FPGAs (e.g., Xilinx Zynq® UltraSCALE+, Intel® Stratix®, and Microsemi SmartFusion®2), traditional lab-based approaches to FPGA verification and validation are becoming less effective. Later in this blog series, we plan to quantify the ineffectiveness of today’s FPGA verification processes in terms of nontrivial bug escapes into production.

In Fig. 1-2, we see that 92% of designs being implemented as FPGAs contain two or more asynchronous clock domains. Verifying requirements associated with multiple asynchronous clock domains has increased both the verification workload and complexity. For example, a class of metastability bugs cannot be demonstrated on an RTL model using simulation. To simulate these issues requires a gate-level model with timing, which is often not available until later stages in the design flow. However, static clock-domain crossing (CDC) verification tools have emerged and are being adopted to help identify clock domain issues directly on an RTL model at earlier stages in the design flow.

Today we find that 43 percent of FPGA projects add security features to their designs. Examples of security features include security assurance hardware modules (e.g., a security controller) that are designed to safely hold sensitive data, such as encryption keys, digital right management (DRM) keys, passwords, and biometrics reference data. These security features add requirements and complexity to the verification process.

Another example of increasing requirements contributing to complexity relates to safety-critical designs. In 2020, we find that 40 percent of all FPGA projects are working under one of multiple safety-critical development process standards or guidelines. However, our 2018 study found that 56 percent of all FPGA projects were working under one of multiple safety-critical development standards, which we suspect was too an anomaly in the 2018 study. We know that the automotive industry is currently experiencing a contraction due to COVID-19, which might account for some of this year’s decline in terms of safety critical projects. In addition, there are potentially some regional biases as discussed in the Introduction section D that should be considered.

For those projects working under a safety-critical development process standard or guideline, in Fig. 1-3 we show the specific breakdown for the various standards. Note that some projects are required to work under multiple safety standards or guidelines, which is why the percentage adoption sums to more than 100 percent. For example, IEC61508 and IEC61511.

The key takeaway from this blog is that FPGA designs are growing in complexity, which impacts verification effort and effectiveness.

In my next blog, I’ll focus on verification effectiveness trends related to FPGA designs.

This article first appeared on the Siemens Digital Industries Software blog at https://blogs.sw.siemens.com/verificationhorizons/2020/11/05/part-1-the-2020-wilson-research-group-functional-verification-study/