This blog is a continuation of a series of blogs related to the 2014 Wilson Research Group Functional Verification Study (click here).  In my previous blogs, I provided data that suggest a significant amount of effort is being applied to functional verification. An important question the various studies have tried to answer is whether this increasing effort is paying off. In this blog, I present verification results findings in terms of schedules, number of required spins, and classification of functional bugs. 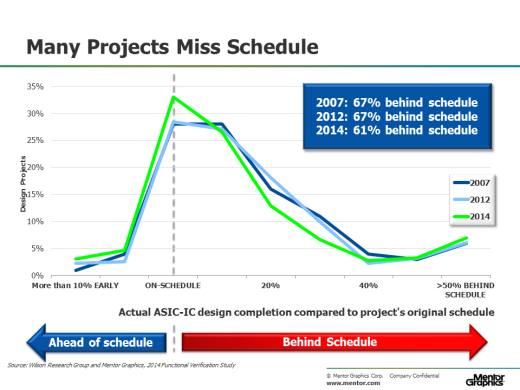 Figure 1 presents the design completion time compared to the project’s original schedule. The data suggest that in 2014 there was a slight improvement in projects meeting their original schedule, where in the 2007 and 2012 studies, 67 percent of the projects were behind scheduled, compared to 61 percent in 2014. It is unclear if this improvement is due to the industry becoming more conservative in project planning or simply better at scheduling. Regardless, meeting the originally planned schedule is still a challenge for most of the industry. 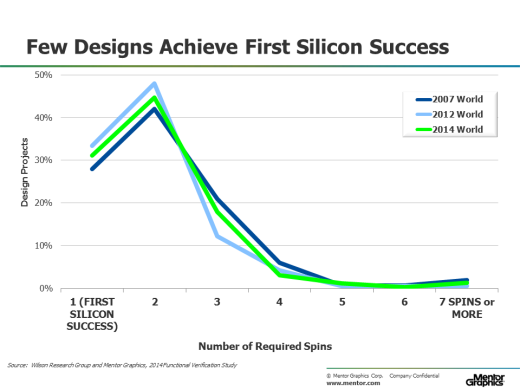 Other results trends worth examining relate to the number of spins required between the start of a project and final production. Figure 2 shows this industry trend from 2007 through 2014. Even though designs have increased in complexity, the data suggest that projects are not getting any worse in terms of the number of required spins before production. Still, only about 30 percent of today’s projects are able to achieve first silicon success.

Figure 3 shows various categories of flaws that are contributing to respins. Again, you might note that the sum is greater than 100 percent on this graph, which is because multiple flaws can trigger a respin. 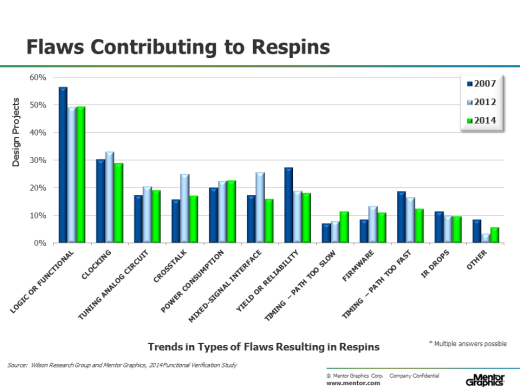 Logic and functional flaws remain the leading causes of respins. However, the data suggest that there has been a slight improvement in this area over the past seven years.

Figure 4 examines the root cause of logical or functional flaws (previously identified in Figure 3) by various categories. The data suggest design errors are the leading cause of functional flaws, and the situation is worsening. In addition, problems associated with changing, incorrect, and incomplete specifications are a common theme often voiced by many verification engineers and project managers. 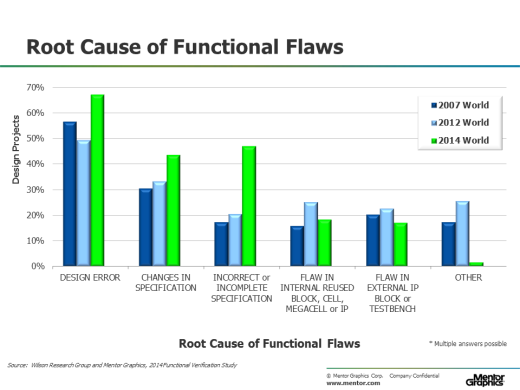 Figure 4. Root Cause of Functional Flaws

In my next blog (click here), I provide a deeper analysis of respins by design size.

This article first appeared on the Siemens Digital Industries Software blog at https://blogs.sw.siemens.com/verificationhorizons/2015/08/17/part-12-the-2014-wilson-research-group-functional-verification-study/