A significant step forward to address standards for advanced system-on-chip (SoC) designs has taken place by the IEEE.  The IEEE announced the new revision of the SystemC standard, known as IEEE 1666™-2011, has been approved.  While it is a revision of the current SystemC standard, IEEE 1666™-2005, the major new feature added was Transaction-Level Modeling (TLM), which is new to an IEEE standard.

For many years now, the TLM specification and accompanying open source code has been incubating in the Open SystemC Initiative (OSCI).  OSCI’s TLM Working Group has developed the TLM 1.0 and TLM 2.0 specifications, both of which are part of the revised IEEE 1666 standard.  TLM is important to SystemC, but it has also been leveraged outside of it. 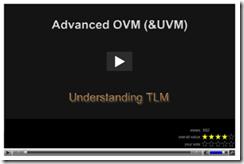 If you don’t already know what TLM is and how the verification community is using it in OVM and UVM, the Verification Academy has a lot of written material and video training modules that will help you learn how this important new IEEE standard is used from simulation to emulation and has boosted verification productivity.  The “Understanding TLM” module is featured in the Advanced UVM section, so if you are still a novice to UVM, you may wish to start with the Basic material first.  This module is presented by fellow Verification Horizons Blogger, Tom Fitzpatrick and offers subtitles in English, Russian, Japanese and Chinese (Traditional & Simplified) to help drive rapid global adoption.

As we brought TLM into the modern verification methodology practice with a SystemVerilog implementation, it also surfaced that there is an opportunity for the creator of TLM, OSCI, and an adopter of it in UVM, Accellera, to discuss what they could do together.  And as I’ve blogged before, those two organizations announced their intention to unite before the end of 2011, as others have seen the potential when both are brought together.  I expect to see more great ideas come from these two groups when they join forces, just like the TLM work that is now an IEEE standard.

For those who want a copy of the revised IEEE 1666 standard, it is still in final IEEE editorial review as the they do their last formatting.  I will share with you when it is ready to use as well as how to get it and where to find it.

The Semantics of SystemVerilog Syntax February 16, 2021 Trying to grasp any programming language from scratch can be a difficult task, especially when you start by reading the…
Logging in pyuvm December 14, 2021 Logging in pyuvm This is part of the Python for Verification series of blog posts. The IEEE UVM specification (1800.2-2020)…
The configurability dilemma creating safe ICs February 4, 2022 A traditional automobile today consists of multiple systems controlling everything from the interior atmosphere to drive train to more advanced…

This article first appeared on the Siemens Digital Industries Software blog at https://blogs.sw.siemens.com/verificationhorizons/2011/11/10/tlm-becomes-an-ieee-standard/