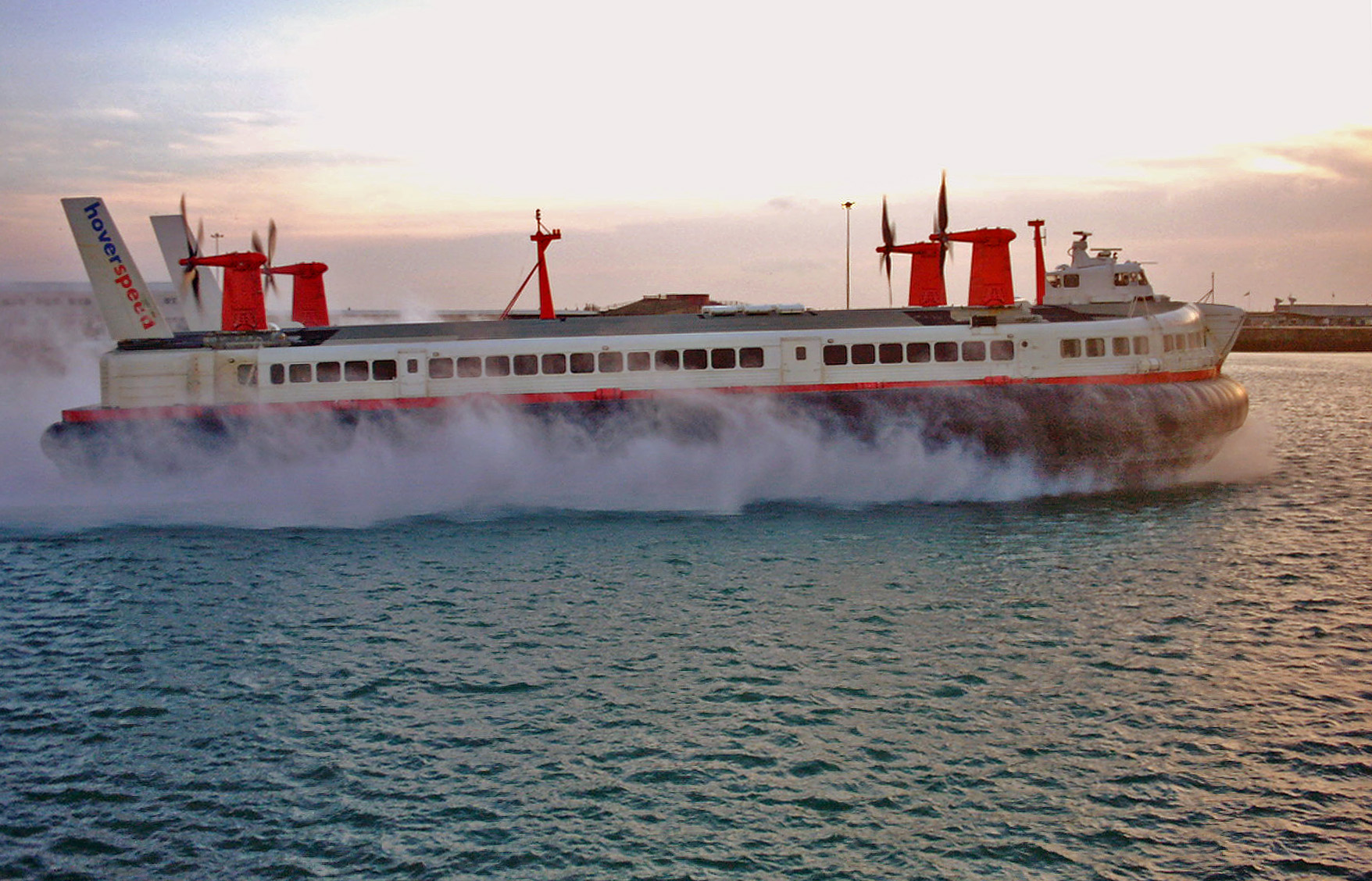 I know what you are thinking, “What in the world do Simcenter electromagnetics and the Hovercraft have in common?” First of all, let’s get you all up to speed on the Hovercraft. Before the days of the Eurostar and the Chunnel, we “flew” across the Channel on these things called Hovercraft. It was noisy as heck, but only took about 35 minutes or so to cross. And the levitation-flying sensation when the air cushion activated and the engines whirled on was pretty cool even for the 1990s.

So back to this question: What’s the link between Simcenter electromagnetics and the Hovercraft? In the early 1970s, the Hovercraft was cutting-edge engineering technology. Floating on an air cushion propelled by power-packing engines, the Hovercraft inspired Prof. Eric Laithwaite from Imperial College London to think about applying the same principles to a “hovertrain” concept. He opted for a magnetic field cushion and electric motor for the propulsion system as you can see in this video, courtesy of the Imperial College London Archives.

The early days of electromagnetic simulation and testing

Well, almost 50 years later, avid readers of the Simcenter blog, we are in for a little treat. Electromagnetics pioneer Dr. David Lowther, currently a professor at McGill University and Technical Director at Siemens, took some time to share his first-hand experience with us. Here’s a little excerpt from our conversation:

Did you start out wanting to work in electromagnetics?

Dr. Lowther: I didn’t originally intend to get into electromagnetics. My career was going to be computers. In the 1960s and 1970s, computers were an area that was growing. It was much different than today. You wrote your code, sat there with a hole-punching machine, punched holes in your cards, waited a full day for the turnaround, then realized you had a bug in the code, and did it all again. During all this first-generation coding, a question came up: what were we going to use the computer for? That is when Peter Silvester, Ernie Freeman and I began to work on the computation of electromagnetic fields and the computer modeling of electrical machines.

When did electromagnetics come into the picture?

Lowther: I worked on linear induction machines for my Ph.D. together with Ernie Freeman and Prof. Eric Laithwaite who was at Imperial College London. High-speed transport was what everyone wanted to do. We had this theory of flying people around 4 inches above the ground at 300 mph on an electromagnetic field. This actually worked. There was a test track in the U.K. belonging to Tracked Hovercraft Limited that actually did this, but Ernie and I didn’t have the money or computer power for full-scale machines so we built scaled models. Don’t forget that computers weren’t good enough at that point.

So what happened next?

Lowther: As we all know, a lot of the early electromagnetic and maglev projects didn’t get off the ground in the 1970s and 1980s for a whole pile of political and economic reasons. By this time, I was well and truly into electromagnetics, working at Imperial College in London for a lecturer by the name of John Carpenter. We were working on problems in electrical machines — about losses in particular because everything is about losing energy. John actually developed an early version of the formulation that is currently used in the Simcenter MAGNET suite.

But you still kept your fingers in the world of early generation computers, right?

Lowther: Basically, we were modeling electrical machines, writing the programs as well as designing the laboratory equipment. The equipment to measure the actual machines wasn’t good enough, so we had to design and develop our own computers for data acquisition to be able to measure what was going on inside the electrical machines.

Where does the Canadian connection come into play?

Lowther: Peter Silvester’s team at McGill University in Montreal was working on computer-based electromagnetic simulation as well. We got connected and I ended up working at McGill for a couple of winters. Out of that came the first version of the original MAGNET code, which was actually built for General Electric. They gave Peter a contract for a code, which worked on a little computer (a PDP-8 for those with long memories!). It wasn’t a big mainframe. Peter was way ahead of his time in considering the capabilities of small local computers rather than large central systems.

The question was how much simulation can you squeeze out of a small machine? We built something that was a “good-enough” design tool for engineers to work on. It was a cheap computer system based on a micro-processor (an LSI-11) for about the price of an electrical typewriter at the time. The code that ran on that machine was the genesis of Infolytica.

This sounds like it was well before the first PC.

It was 1978. That computer gave us enough simulation power that we could see what was happening inside the electrical machine. This was a critical step forwards. Starting in the mid-1960s, design engineers were seeing the loads in power generators increasing significantly. (This was due to the limitations on physical size imposed by the need to ship the machines.) This load increase was resulting in overheating and even melting. If your power station has a generator that overheats, well, that is not very good. But the question was – where was the design problem? The only way to know what is going to happen inside a machine is to do a computer simulation.

Testing in the process

You were already testing at this point as well?

The reason we needed to test was to get experimental data to validate the simulation systems. However, we could only really look at the machine from outside, measuring effects inside a stack of steel laminations is very difficult. If you put a measurement system, which is basically just a little coil of wire between the laminations in a stack, it creates an air gap and that changes the magnetic circuit and thus the fields.

You needed the data to support the simulation validation. So how did you work around this one?

We developed a system where we embedded the coils inside the laminations by etching away a small amount of the steel. This way we could see what was going on. This technique gave us signals related to the interior fields but we had to develop a high-speed acquisition system to pull this data out. With this data, we could verify the simulation code.

One of the first desktop stations

So, in a nutshell, you knew you had something valid that would work for electromagnetic simulation. What was next?

We hired a couple of people so we wouldn’t have to write all the code ourselves. (By the way, one of them was Behzad Forghani who is currently the Product Line Manager for Simcenter MAGNET). At that time, we were building our own workstations from the ground up including the graphic systems, programming the machine code, and building our own joysticks for graphical interaction. Remember input devices didn’t really exist yet.

What did your first customers think about this revolutionary product?

We went to various companies in the industry and said what we have is a desktop station for engineers, which can go into the design office. We got push-back from what would now be called the IT guys – then the mainframe people – who said that they were not convinced that was an appropriate direction to move in, particularly with a non-standard workstation structure.

So to make the company fly, we actually had to consider implementing on an interactive terminal connected to a mainframe. We implemented a system called RUTHLESS for the Rutherford and Appleton Laboratory in the UK and a 3D mesh generator named JELLY for Philips in the Netherlands. No sooner had we done that, than the IBM PC appeared on the scene with enough computational power to implement an analysis system. So we moved away from the mainframe concept and implemented MAGNET on a PC. That was the mid-1980s.

Maybe a little thank you to the Hovercraft?

Today, as most of you know, electromagnetics is at the core of every major industry trend. Without electromagnetics, your induction hob wouldn’t cook your food. Your electric vehicle wouldn’t be able to hit 80km/h. We couldn’t even think about electric aircraft because they would be too heavy to fly. 5G networks wouldn’t be technically feasible…And, maybe, just maybe, we have the Hovercraft to thank for some of this engineering inspiration.

If you haven’t tuned in to see the latest movie about the Simcenter solutions for electromagnetic simulation (featuring Dr. David Lowther and Koen De Langhe, Ph. D., Director Product Management Simcenter 3D), take an extra five minutes to enjoy this…

Backgrounder: About 40 years ago, Dr. David Lowther, together with Dr. Peter Silvester, professors at McGill University in Montreal, Canada, and Dr. Ernie Freeman started a little company called Infolytica. Several years ago, Infolytica was purchased by Mentor, which was purchased by Siemens. Their code was combined into what today is Simcenter MAGNET and Simcenter 3D Electromagnetics – all part of the Xcelerator portfolio from Siemens Digital Industries Software. Product names aside, what matters most is that whatever the electromagnetic issue at hand, be it low-frequency, high-frequency, a one-off study, or complete digital twin, Siemens has a solution.

One thought about “Simcenter electromagnetics and the Hovercraft?”

This article first appeared on the Siemens Digital Industries Software blog at https://blogs.sw.siemens.com/simcenter/simcenter-electromagnetics-and-the-hovercraft/