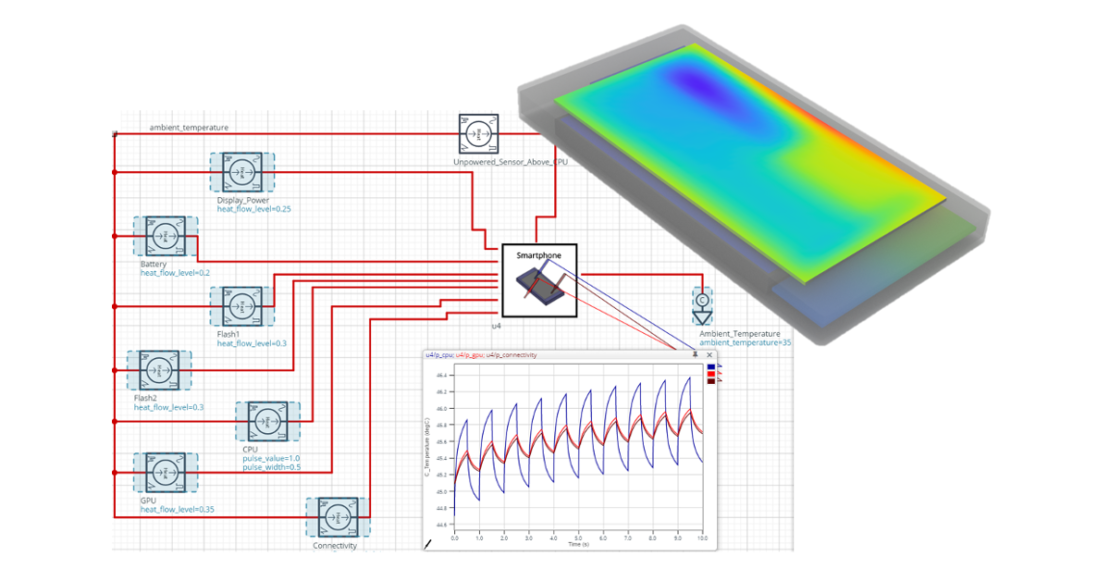 How is a thermal netlist generated for electrothermal analysis?

A thermal netlist for use in a circuit simulation tool, generated from a 3D thermal analysis model, is much more than a typical simple thermal resistance model or an R-C network model representing a single heat flow path.  A thermal netlist, when generated from a 3D thermal conduction model, is a network representing the relationship of multiple powered components, or power sources generating heat within a model, which is then mapped to simulation outputs for temperature at locations represented by nodes. When applied in a circuit simulator with electrical netlists and control applied, it can be used to model transient thermal response to variations in power, to accurately predict temperature orders of magnitude faster than using full 3D CFD.

As a quick visual recap on the concept of extracting a thermal netlist and methods used, I refer you to an existing video below from the past Simcenter Flotherm 2019.1 release where thermal netlists first became possible to generate in the spice format (*.sp file) for use by electro-thermal circuit simulation tools supporting the spice format and to a set level of error specified by the user.

A new feature in Simcenter Flotherm 2020.1 enables you to generate and export a thermal netlist in VHDL-AMS (IEEE Standard 1076.1) format from a 3D thermal conduction model with any number of heat sources.  This VHDL thermal netlist is guaranteed to produce transient thermal results for any power profile that are within a user defined tolerance of the full Simcenter Flotherm model’s results, but much, much faster (up to 100,000x faster).  VHDL-AMS is supported in many circuit simulation tools, such as Mentor SystemVision Cloud, Mentor Xpedition-AMS, and Mentor Eldo.

There’s an online example you can launch by clicking on the image below that you can play with right now!  . A Simcenter Flotherm 2020.1 model of a generic smartphone with several powered components has been transformed into a VHDL-AMS thermal netlist, imported into Mentor SystemVision Cloud, and connected to a simple circuit. You can try powering the components with various power levels and functions.

Feel free to modify the various parameters (double-click the blue components to see what you can change) and what is then simulated (green arrow) to get the updated transient temperatures.  Don’t worry, you can’t mess the original model up for others, so feel free to explore in any way.

As a thermal analyst, mechanical or design engineer – you can now support your electrical engineering colleagues by transforming your 3D Simcenter Flotherm thermal models into a VHDL-AMS thermal netlist format and thus better enable fast, accurate, electrothermal circuit simulations to be added to your organization’s design process.

For an EE perspective, view the blog my colleague Mike Donnelly has assembled on a more detailed digital smartphone example for electrothermal modeling in SystemVision Cloud. He has also published a separate analog example featuring an LED lamp control circuit you can view here.

Thermal engineers using Simcenter Flotherm, can also themselves take advantage of these VHDL-AMS thermal netlists to tackle transient thermal issues alongside other available reduced order modeling techniques. Many studies take far too long to analyze in a 3D CFD analysis, such as rapid, complex power variations, or exploring dynamic power control strategies. SystemVision Cloud is a great platform for doing these types of studies, and easily adopted by thermal engineers in a few minutes, to supplement their 3D CFD primary tasks, and there are no costs to try it out.

Please view the Simcenter Flotherm 2020.1 release overview blog by my colleague John Parry to learn about new features including VHDL-AMS format thermal netlists and other topics on reduced order modeling such as export of BCI-ROMs in FMU format for use by system modeling tools, plus other enhancements in PCB data management.

The future of thermal design - earlier… December 17, 2020 During a panel discussion at the recent SEMI-THERM Thermal Technologies Workshop about the ‘Future of Thermal Design’ one of the…