Applying ECOs to multi­patterned designs can be a nightmare, unless you plan ahead

A lot has been written and discussed about how to decompose (color) layouts for advanced process nodes that require multi­patterning (MP). However, one topic that has been sorely ignored is how to efficiently make changes to designs that are already colored, or even taped out and processed. We tend to act like all designs work out the first time through, but in reality, this is unfortunately not the case.

Sometimes an issue with a design may be found very late in the design process, requiring changes to the layout. Sometimes there are yield or performance issues with designs manufactured in silicon and a design change is needed to fix the cause of those issues. Such design changes are typically called engineering change orders (ECOs). Many times, the changes are quite small, but nonetheless, they are changes in the layout. In MP designs, even small changes can wreak havoc on coloring (and consequently, time to market) if not dealt with appropriately. We need to proactively develop tools and flows to provide a complete ECO enablement solution, before these issues consume resources and destroy schedules.

At first glance, you may ask yourself what the big deal is. If the design needs to be changed, can’t you just rip all the colors out, make the edits, and then recolor the whole design again? It turns out that this is similar to fixing a scratch on a car by taking all the body panels off, dipping them in an acid bath to strip the paint, repainting them, and putting them back on the car again. It works, but it costs a lot of time and money, and your car might be an entirely different color when you’re done.

Assuming you used a good hierarchical “color as you go” design flow in which you colored each piece of intellectual property (IP) as you built up the chip, and performed your timing analysis at each step to make sure everything worked well, you probably ended up with a very hierarchical set of colored data, and nicely-tuned performance. If you rip all that out and recolor the entire design at the full-chip level, you could not only destroy the hierarchy of the colored data, but also change the coloring of a significant percentage of the design, such that you would need to redo detailed timing analysis for everything.

Let’s walk through a simple example. In your original flow, you may have colored an IP block and performed timing analysis, then placed that colored block multiple times into the top-level chip. Not only do you know what the timing is of that block, but since it is colored at the block level, all placements of that block have the same coloring. If you rip all that color out and now try to re­color at the top-level, you could not only get different colors than you did the first time, but each placement may have different colors compared to the others. Now not only do you have to redo all your timing, but that timing can vary between instances of the block because of the varying colors.

The key to recoloring an MP layout during an ECO is the same as making any design modification during an ECO—you want to change as little as possible. The less that changes, the less likely that you introduce other unwanted effects in the rest of the design, the less re­characterization you have to do, and not to mention, the less work you have to do in making the changes themselves. The question becomes, how do you limit what you have to recolor during an ECO, and how do you make those coloring changes while leaving the rest of the design coloring intact? Perhaps an even better question may be, can you get software automation to do it all for you?

Well, yes, there are automated solutions. While we’re not familiar with all of them, the Calibre Multi-Patterning functionality provides an automated approach that applies a “smart ECO re-coloring” flow to automatically minimize changes to coloring during an ECO design change. Using this flow as our example, here are the key steps, as shown in Figure 1.

Let’s see how this works in an actual double-patterned (DP) layout. Figure 2 shows a portion of two routing layers in a typical layout. The left image shows what this portion of the layout looked like before coloring, while the right image shows the original colors that were generated. 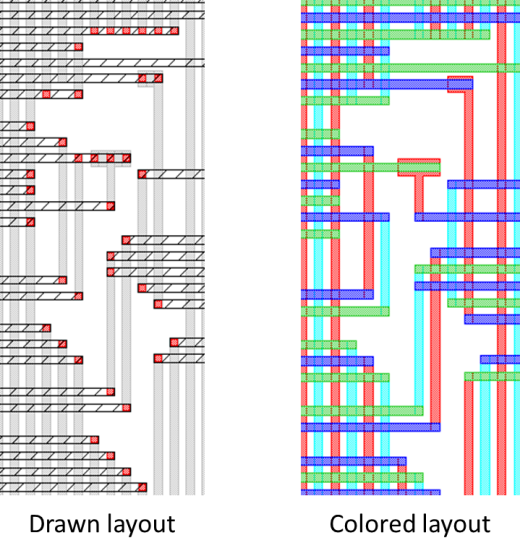 For some reason, this design does not work as expected, and the design team determines that it can be fixed via an ECO by re­routing a small portion of the layout. Figure 3 compares the original uncolored layout with the same area after the ECO routing changes. 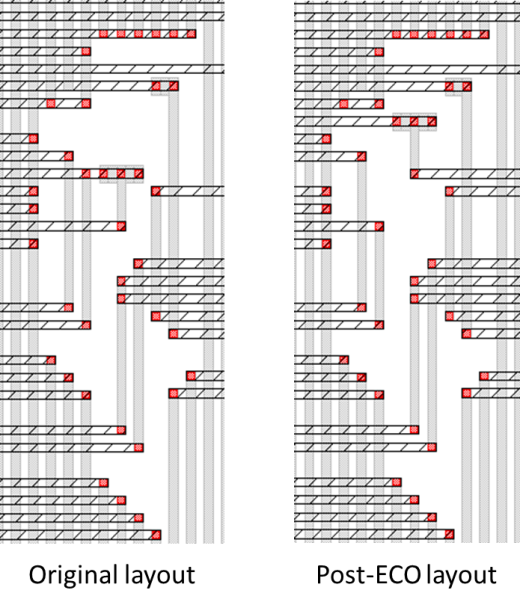 Now you can compare the two layouts and identify exactly what was modified. Figure 4 highlights the polygons that were changed during the ECO. 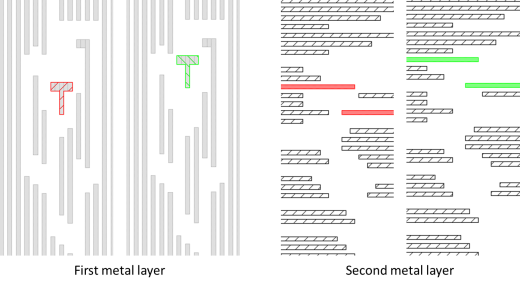 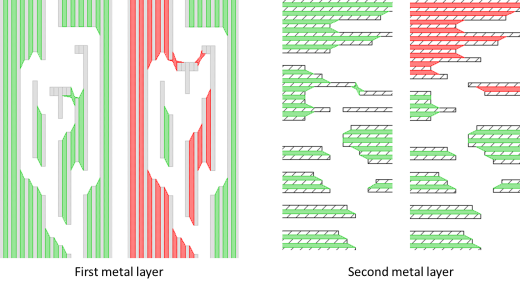 Figure 5: Comparison of connected components before and after the ECO changes (red components need to be re-colored).

The tool then performs coloring on just the small portion of the layout impacted by the ECO changes. This limits the changes, and significantly improves the runtime compared to rerunning the entire design. Figure 6 shows the new colors that were generated. 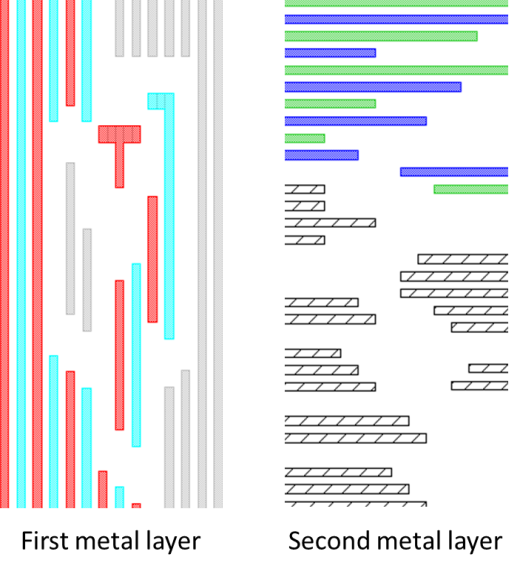 Now the automated process can pull the colors from the original design that did not have to change, and merge them with the newly-colored data to form a completely colored database. Figure 7 shows the data pulled from each database, and the resulting combined set of colors. 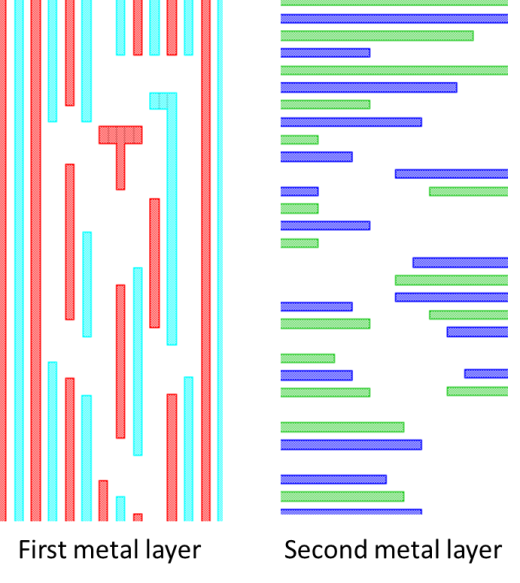 This layout is now ready for a final signoff design rule checking (DRC) run to verify everything is good to go. Figure 8 compares the final re-colored ECO layout with the originally colored design. 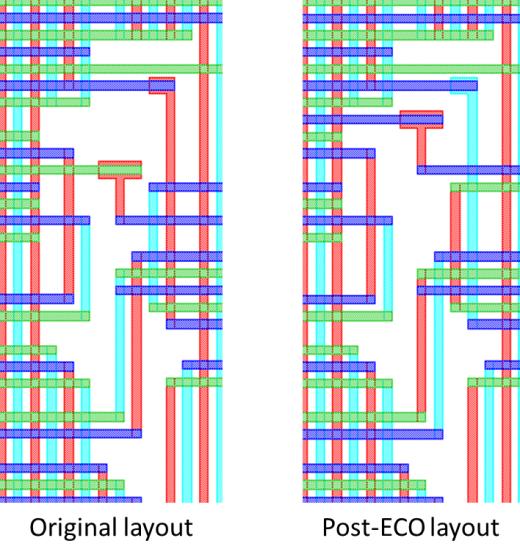 This automated ECO solution has many advantages over alternative approaches.

If you’re struggling with applying ECO design changes in multi­patterned design processes, this flow may give you some insight into a better solution. Until then, here’s hoping that all your designs come out perfectly the first time!

David Abercrombie is the advanced physical verification methodology program manager at Mentor Graphics. For the last few years, he has been driving development of EDA tools that can solve the issues in design to process interactions (DFM) that create ever-increasing yield problems.

Alex Pearson is a Calibre Technical Marketing Engineer in the Design to Silicon division of Mentor Graphics, currently focused on multi­patterning techniques for physical verification at advanced process nodes.

Ease on down the road…why “ease of use” is the next big… March 16, 2022 Ease of use is an important issue when enhancing product functionality and introducing new technology. Calibre Design Systems considers ease…
DAC in December?? A Review of Calibre Design Solutions at… March 3, 2022 Did it feel a bit weird to be submitting research papers for DAC 2022 while packing to go to DAC…
In the EDA world, efficiency + ease of use = productivity… October 21, 2021 By Shelly Stalnaker Electronic design automation (EDA) grew out of the need to make it easier and faster to design…

This article first appeared on the Siemens Digital Industries Software blog at https://blogs.sw.siemens.com/calibre/2016/05/11/how-do-i-eco-a-multi-patterned-design/