It is not uncommon for FPGA projects to use multiple languages when constructing their RTL and testbenches. This practice is often due to legacy code as well as purchased IP. Hence, you might note that the percentage adoption for some of the languages that I present sums to more than one hundred percent.

Also, it’s important to note that this study focused on languages used for RTL design. We have conducted a few informal studies related to languages used for architectural modeling—and it’s not too big of a surprise that we see increased adoption of C/C++ and SystemC in that space. However, since those studies have (thus far) been informal and not as rigorously executed as the Wilson Research Group study, I have decided to withhold that data until a more formal study can be executed related to architectural modeling and virtual prototyping. 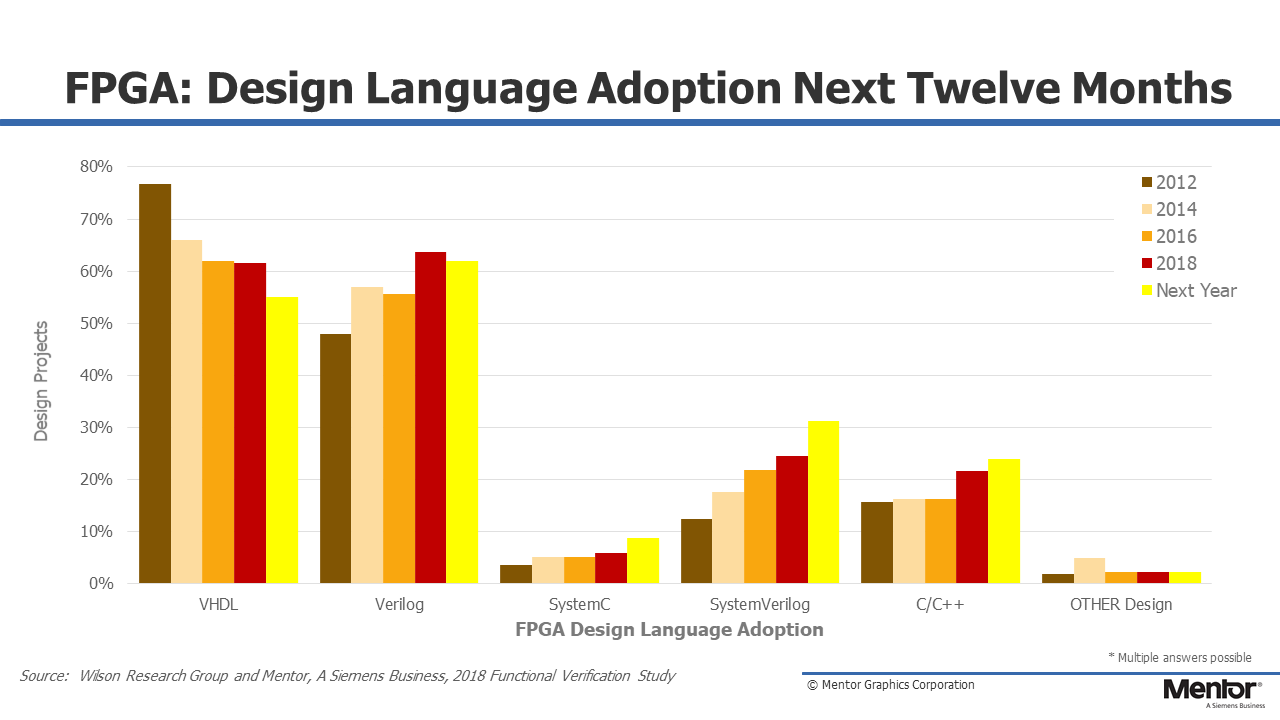 VHDL has historically been predominant language used for FPGA RTL design, although it is slowly declining when viewed as a worldwide trend. An important note here is that if you were to filter the results down by a particular market segment or region of the world, you would find different results. For example, if you only look at Europe, you would find that VHDL adoption as an FPGA RTL design language is about 78 percent, while the world average is 62 percent. However, I believe that it is important to examine worldwide trends to get a sense of where the overall industry is moving in the future in terms of design ecosystems.

Historically, VHDL was the predominant language for FPGA testbenches, yet it has leveled off to about 45% adoption, and have seen an increase in SystemVerilog adoption. Today, it is not unusual that the RTL design was created using VHDL, and the testbench was created using SystemVerilog. The increase in “Other” in 2018 is due to the recent adoption of various scripting languages by various FPGA projects (e.g., Python). Finally, the downward trend in VHDL and Verilog adoption in 2016 was probably an anomaly in the study. It is more likely that adoption has only slightly declined or remained flat in 2016.

The adoption trends for various base-class library and methodology standards are shown in Fig. 6-3, and we found that the Accellera UVM is currently the predominant standard that has been adopted to create FPGA testbenches worldwide. You might note that we are not showing historical trends for the Open Source VHDL Verification Methodology™ (OSVVM) and the Universal VHDL Verification Methodology (UVVM) since 2018 was the first year we tracked these methodologies. 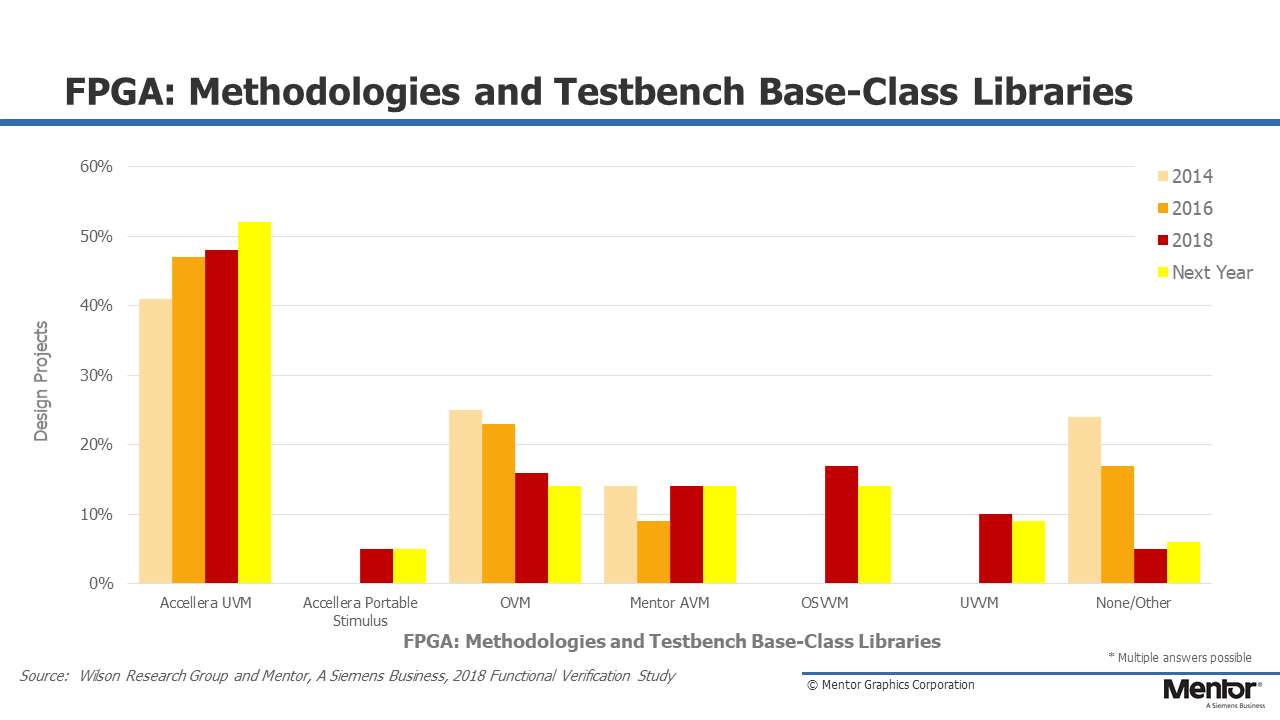 Finally, FPGA project adoption trends for various assertion language standards are shown in Fig. 6-4, where SystemVerilog Assertions (SVA) is the predominate language. Similarly to languages used to build testbenches, it is not unusual to find FPGA projects create their RTL in VHDL and then create their assertions using SVA. 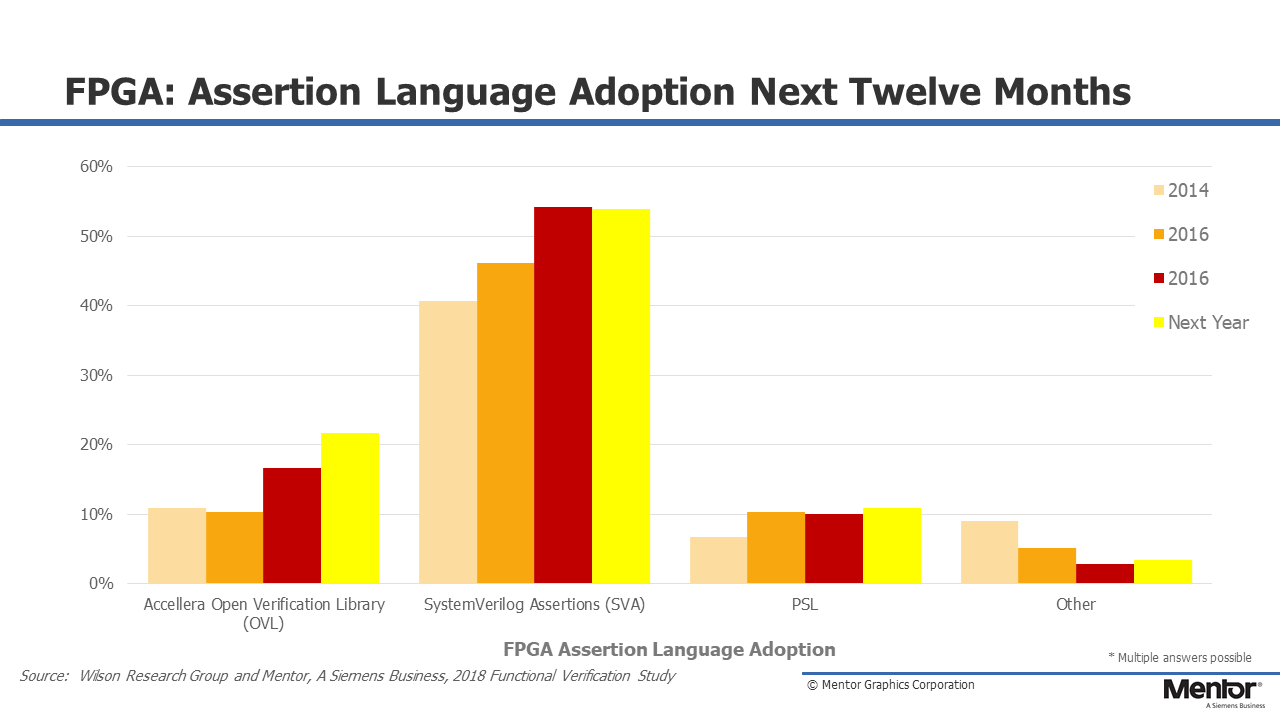 In my next blog (click here), I will shift the focus from FPGA trends and start to present the IC/ASIC findings from the 2018 Wilson Research Group Functional Verification Study.

This article first appeared on the Siemens Digital Industries Software blog at https://blogs.sw.siemens.com/verificationhorizons/2019/01/15/part-6-the-2018-wilson-research-group-functional-verification-study/