This is the first in a series of blogs that presents the results from the 2012 Wilson Research Group Functional Verification Study.

In 2002 and 2004, Ron Collett International, Inc. conducted its well known ASIC/IC functional verification studies, which provided invaluable insight into the state of the electronic industry and its trends in design and verification. However, after the 2004 study, no other industry studies were conducted, which left a void in identifying industry trends.

To address this void, Mentor Graphics commissioned Far West Research to conduct an industry study on functional verification in the fall of 2007. Then in the fall of 2010, Mentor commissioned Wilson Research Group to conduct another functional verification study. Both of these studies were conducted as blind studies to avoid influencing the results. This means that the survey participants did not know that the study was commissioned by Mentor Graphics. In addition, to support trend analysis on the data, both studies followed the same format and questions (when possible) as the original 2002 and 2004 Collett studies.

Unlike the previous Collett and Far West Research studies that were conducted only in North America, both the 2010 and 2012 Wilson Research Group studies were worldwide studies. The regions targeted were:

The survey results are compiled both globally and regionally for analysis. 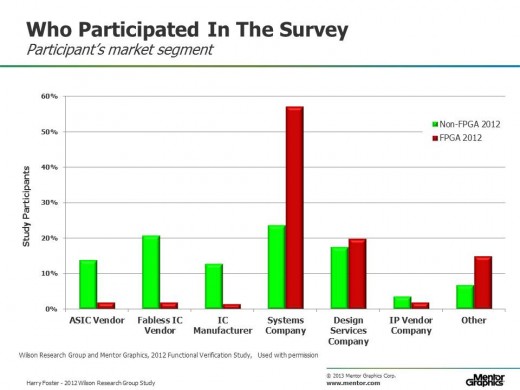 In a future set of blogs, over the course of the next few months, I plan to present the highlights from the 2012 Wilson Research Group study along with my analysis, comments, and obviously, opinions. A few interesting observations emerged from the study, which include:

A few final comments concerning the 2012 Wilson Research Group Study.  As I mentioned, the study was based on the original 2002 and 2004 Collett studies.  To ensure consistency in terms of proper interpretation (or potential error related to mis-interpretation of the questions), we have avoided changing or modifying the questions over the years—with the exception of questions that relate to shrinking geometries sizes and gate counts. One other exception relates  introducing a few new questions related to verification techniques that were not a major concern ten years ago (such as low-power functional verification).  Ensuring consistency in the line of questioning enables us to have high confidence in the trends that emerge over the years.

Also, the method in which the study pools was created follows the same process as the original Collett studies.  It is important to note that the data presented in this series of blogs does not represent trends related to silicon volume (that is, a few projects could dominate in terms of the volume of manufactured silicon and not represent the broader industry).  The data in this series of blogs represents trends related to the study pool—which is a fair proxy for active design projects.

My next blog presents current design trends that were identified by the survey. This will be followed by a set of blogs focused on the functional verification results.

Also, to learn more about the 2012 Wilson Reserach Group study, view my pre-recorded Functional Verification Study web-seminar, which is located out on the Verification Academy website.

This article first appeared on the Siemens Digital Industries Software blog at https://blogs.sw.siemens.com/verificationhorizons/2013/04/23/prologue-the-2012-wilson-research-group-functional-verification-study/