While this may come as a surprise to many, one thing has remained constant for many years: the two organizations have had a long standing policy of collaborative interactions as both have evolved their standards programs.  At a DATE 2004 panel titled “SystemC and SystemVerilog: Where do they fit?  Where are they going?,” technical members of the two communities gathered to ponder answers to those questions.  At DAC 2004, when I was chair of Accellera and Guido Arnout was chair of OSCI, we stood before a large assembly of SystemC users a few months later to point to what was not so obvious to many, SystemVerilog and SystemC complement each other. 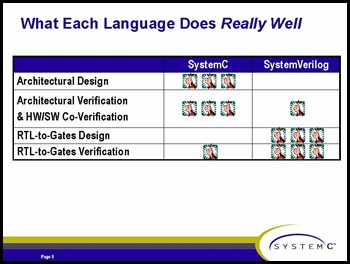 Guido and I dispelled any issues of a “language war” and focused on what the value each language and what it delivered to the design and verification community.  A lot has transpired since then.  Both SystemC and SystemVerilog are now IEEE standards, know as IEEE Std. 1666™ and IEEE Std. 1800™ respectively.  And both OSCI and Accellera have continued to evolve their standards work program in significant and meaningful ways.

In this evolution, it became clear to me that each organization was “completing” the other.  OSCI has developed the popular Transaction Level Modeling (TLM) standards and Accellera had adopted TLM in their Universal Verification Methodology (UVM™).  As the technical teams from each organization have leveraged each other, it began to make more sense to initiate discussions to unite the two groups to address further front-end EDA standards challenges – as one. And, indeed, the two organization recognized this and have taken the steps to determine how best to combine operations into a single organization.

In the months ahead, the unified organization will emerge, but for now, it is business as usual for the standards development teams in OSCI and Accellera.

What do you think about the unification?

Python and the UVM September 9, 2021 In our previous two posts in this series on Python as a verification language, we examined Python coroutines and using…
Leave the House With a Clean Design September 14, 2021 Wouldn't it be great if there were something that would stop you from leaving the house wearing mismatched clothes -…
Getting your Safety Architecture just right February 4, 2022 Introduction In a recent industry survey, roughly 40% of ASIC and FPGA project starts had functional safety part of their…

This article first appeared on the Siemens Digital Industries Software blog at https://blogs.sw.siemens.com/verificationhorizons/2011/06/21/accellera-osci-unite/