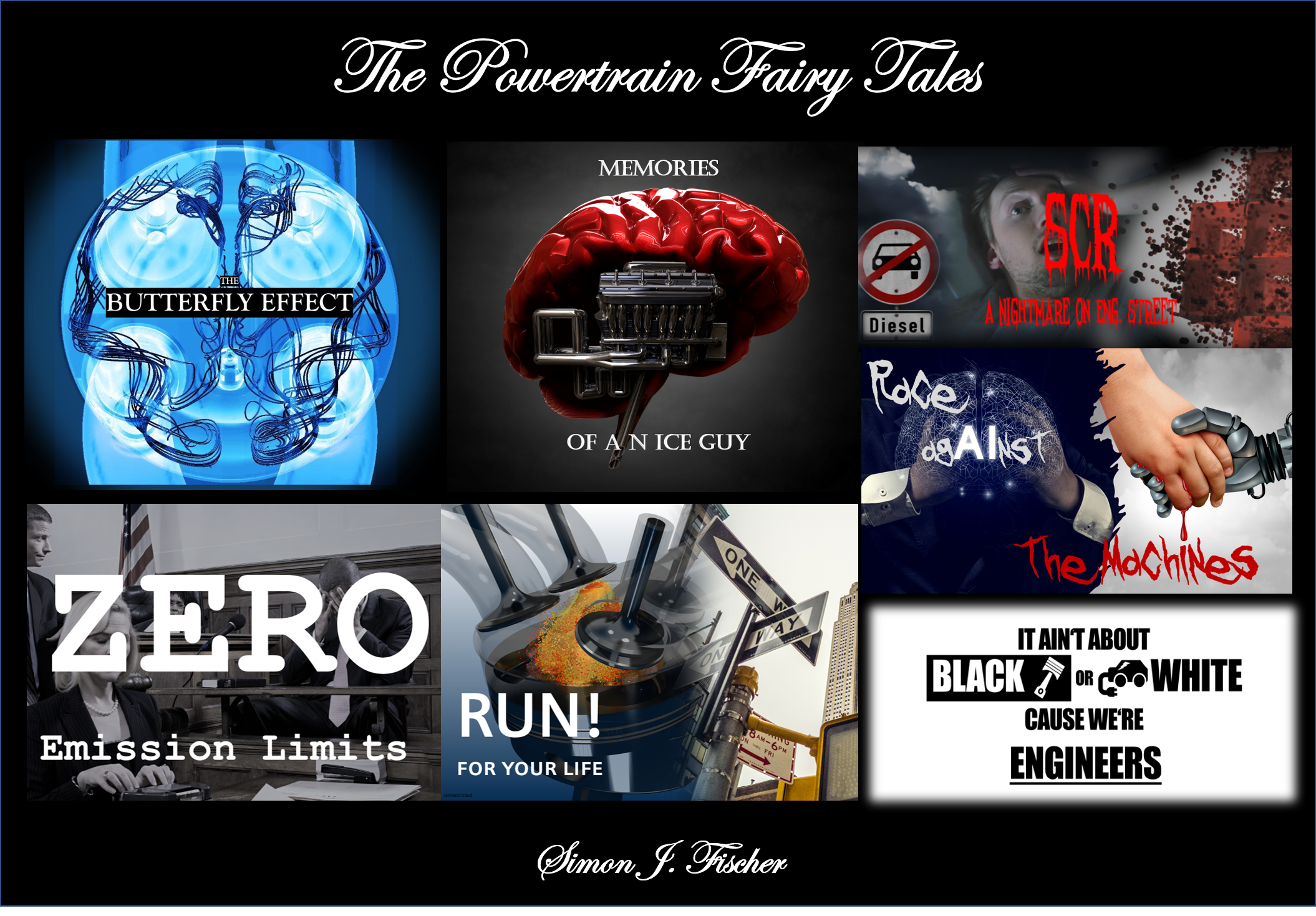 Under the hood of rigorous engineering, powertrains are full of myth, uncovered secrets and freaky horror stories. This series is the wrap-up of 13 exciting years in 7 stories that take you down a bumpy road.

Thirteen years ago I started as an industry funded PhD student in powertrain engineering when the 2008 financial crisis hit the automotive industry and put my projects into massive trouble. A few years later and no wiser I was sitting in the first row seeing the struggles with the complexity of aftertreatment system devices that ultimately lead to Diesel gate. Another five years more I supported major OEMs on in-cylinder combustion simulation when the internal combustion engine came under never before seen legislative and competitive pressure.

After thirteen years witnessing the most disruptive era the automotive industry has ever seen, I feel I have finally concluded my series of short stories on that time. If you dare, follow me down the rabbit hole, into my scary and weird world of the

When the old engineer dies, he whispers “Butterfly” into his wife’s ear. Puzzled by the odd last words she starts to search for their meaning. Deeper and deeper is she pulled into his world and discovers the secrets of the highly nonlinear world of engine cfd simulation. Join her on this ride

Once upon a time there were four brothers. Their names were U, U, U and S. As the second two U’s were twins and just looked exactly the same everybody just called them double-U (“W”). They were just perfect spheres in perfect beauty of nature’s symmetry. In average they were the size of 30 microns, but despite this tiny fact their fate caused an impact of 30 billion dollars and still causes a nightmare to hundreds of engineers. You wonder how this is even possible? Well, find out if you dare

Chapter 4: Run! For your life

Internal Combustion Engines are doomed to die? Well, imagine yourself when suddenly you are being told that you had only one hour to live! What would you do? 60 minutes to go? Here are 6 things that will take you 10 minutes each…

Chapter 5: The end of the powertrain bias

Internal Combustion Engine vs. Electric Machine, this seems a famous game these days. Media, politicians, OEMs, car owners – all of them have their arguments and for one or the other reasons, they have their vision of where they place themselves in this fight. The worrying thing is that even in our engineering world you get the impression that you have to choose and you have to choose apriori.

As an engineer you better don’t get caught in the powertrain bias! Why? Check it out here

I still recall that day, when I was visiting a playground with my kids, when a huge SUV – apparently V8-powered – turned around the corner and disrupted the atmosphere of chirping birds and screaming children – whatever the latter means in terms of „atmosphere“. Sitting on the teeter–totter, my kids sent me towards the sky and kept me up there. At the top, I stared at the V8-powered vehicle, with that tiny little face of the driver seeming somewhat oddly down-scaled in the slightly over-sized piece of metal. And I started to think about what I had been doing for nearly a decade of my life…

Chapter 7: Race against the machines

He stared at his screen. In absence he rotated the model. The scene ran through his mind over and over. It just did not make sense. How on earth could they have known? I mean he had heard of those pre-crime pilot projects where – based on an algorithm- the police would send policeman to patrol in neighborhoods that were more likely to be a place of crime conviction or even put selected individuals under surveillance. But this one was different. He had never committed a crime, he was the normal guy from next door. He was a respected engineer. It was not to be expected, predicted, prevented? Or?

This is what the critics say about Powertrain Fairy Tales

“What as he been smoking when he wrote this up!?”

“With his powertrain fairy tales Fischer has crafted a complete new genre. His engineering stories are both insightful and entertaining at the same time. Like no other, Fischer masters to bring powertrain engineering to a broader audience!”

“I wonder what he’s been cooking up this time”

“What a waste of time. Powertrain fairy tales – An absolute Must-NOT read!”

me in a dark moment

Happy to hear yours! In the comment section or here

4 Myths about AI in CFD April 6, 2021 As Artificial Intelligence (AI) has become more ubiquitous in our everyday lives, so too has confusion about what it is…
Model-based design from ICEs to ICUs: Bridging the… November 10, 2021 The events of the past few years have turned global attention towards health and, more specifically, healthcare. From the images…
Surfboard CFD - Riding the Digital Wave July 29, 2022 The flip-flop engineering symposium Monday, December 9, 2019, 7 pm. Sunset Beach Elementary School Cafeteria, Oahu's North Shore, Hawaii. Two…
This article first appeared on the Siemens Digital Industries Software blog at https://blogs.sw.siemens.com/simcenter/the-powertrain-fairy-tales-engineering-stories/