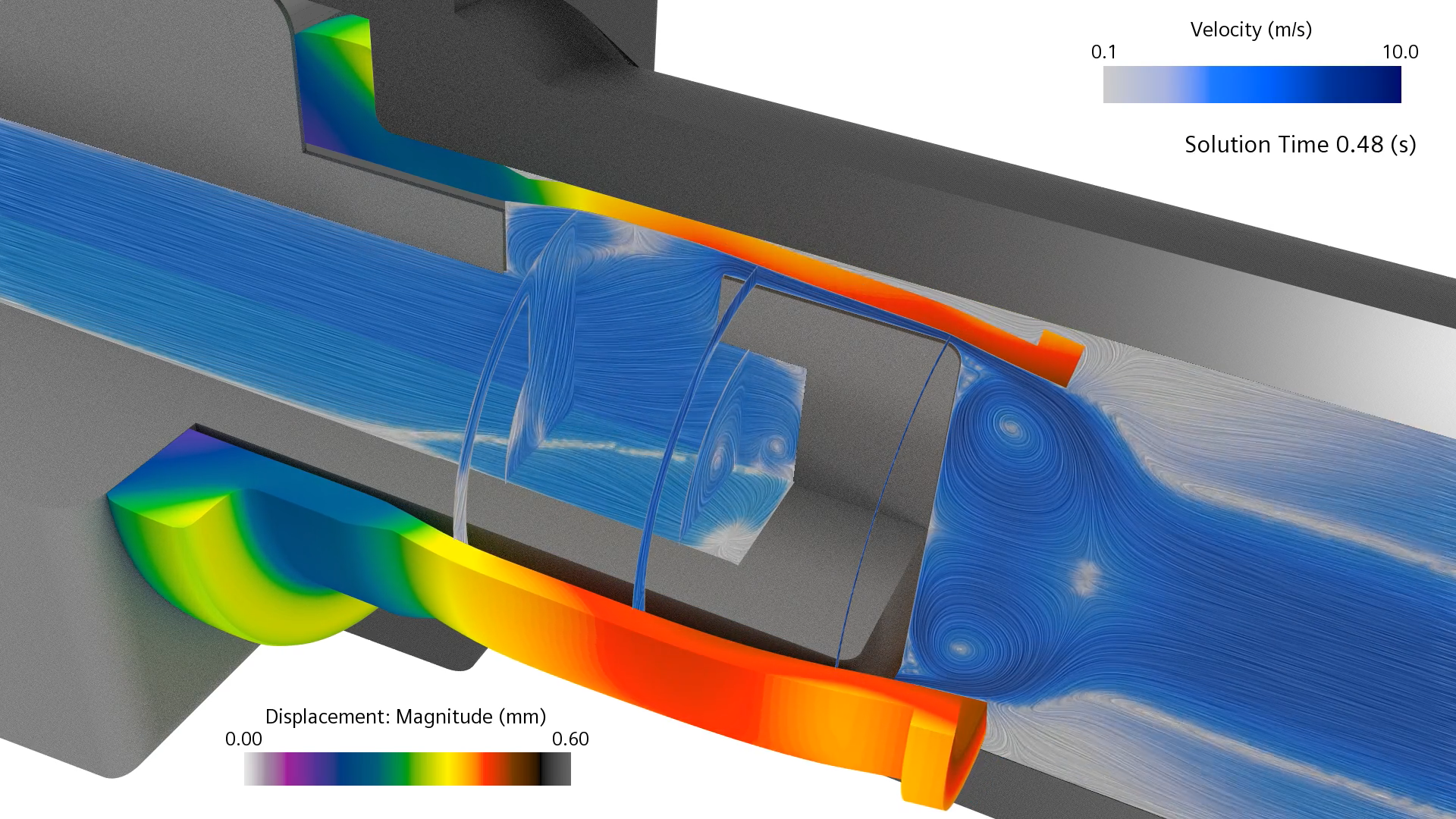 What do the safe operation of high-tech sensors and cameras of 21st-century automotive and the invention of the Dunlop bicycle valve from 1891 (US patent US455899) have in common?

Many applications such as seals, gaskets, valves, and nozzles imply Fluid-Structure Interaction (FSI) in conjunction with mechanical contact between solid bodies. Due to the highly non-linear nature of contacts, we often tend to neglect the respective contact modeling especially in multi-physics applications such as FSI. For a number of applications, being able to model mechanical contact along with fluid-structure interaction is even the key enabler, to do a physical meaningful simulation at all.

Read this article to understand how and why!

For cameras and sensors to produce a sharp image or signal, they require a clean lens. Since many of those installed in automotive are exposed to dirt and debris regular cleaning is a must. This is usually done with the help of a liquid spray from a nozzle.
You see below a simple but clever design of a sensor and camera nozzle. It consists of just three parts: a connector, a rubber sleeve, and a nozzle.

Modeling mechanical contacts between solid and elastic bodies, introduction of a new model

The rubber sleeve seals the assembly and acts as a valve. To illustrate this, we have created a 3D model in Simcenter STAR-CCM+. The connector, as well as the nozzle, are assumed to be rigid, while the sleeve is modeled as an elastic body. The contact between -sleeve and connector- as well as -sleeve and nozzle- is included. This is possible thanks to the ability to now model mechanical contact with any tessellated geometry parts.

The animation below shows the assembly process of the three parts:

Once installed, the sleeve closes off two radial holes in the connector (see left image). As soon as the cleaning system is activated a pump is being switched on. The pump pressurizes the liquid, and the sleeve deforms because of the liquid pressure. This opens a flow path underneath the sleeve (as shown on the right).

The bicycle valve developed by Dunlop 1891 works exactly like that. In the image below, you can see the radial holes in the valve body covered by a thin rubber sleeve.

The model of the sensor and camera nozzle has proven to be very useful to illustrate how the design works. But what about the engineering value? For example, how much liquid will leave the nozzle per unit time considering that the pump of the cleaning system can generate a pressure differential of 1.0 bar?

Let’s approach this question in a pragmatic manner.

The video below shows the results of this approach: the average mass flow rate is about 1.93 g/s.

In order to increase the accuracy and the engineering value of the model, we must take the two-way coupling between fluid and structure into account. Since the flow model and the structure model are part of the same Simcenter STAR-CCM+ simulation this is straightforward and does not even require co-simulation.

The video below shows the results using FSI simulation with mechanical contact. The pressure at the inlet is being ramped up from 0.0 bar to 1.0 bar over a period of 1.0s, after that the pressure is kept constant at 1.0 bar. The average mass flow rate between 1.0s and 1.5s is about 1.76 g/s.

One more thing that we find particularly fascinating is to see how the high-speed flow under the sleeve actually sucks the sleeve tip radially inwards. Of course, this is an effect that can not be captured in the pragmatic approach.

In my mind, the sensor and camera nozzle application demonstrates how the new contact modeling capability adds value to Simcenter STAR-CCM+ in three different ways.

There is a bright future ahead of all these autonomous vehicle cameras out there! And the next time you pump up that flat tire, I am sure you will think about FSI with mechanical contacts.

Read the full release announcement of Simcenter STAR-CCM+ 2022.1
Want to stay up to date on news from Siemens Digital Industries Software? Click here to choose content that's right for you

Exciting Days October 23, 2019 The 7th November 1940 was a particularly bad day to cross the Tacoma Narrow Bridge.
Fluid-structure interaction (FSI) of a Trileaflet Heart… August 14, 2020 A long-awaited opportunity Working from home has become the new normal for many of us. And while schools and day…
What’s New in Simcenter STAR-CCM+ 2020.2? June 23, 2020 With Simcenter STAR-CCM+ 2020.2 we deliver new capabilities and enhancements to help you deploy high-fidelity digital twins with ease. Version 2020.2 is packed with…

2 thoughts about “Fluid-Structure-Interaction FSI with mechanical contact? In one simulation? Yes, in one!”

This article first appeared on the Siemens Digital Industries Software blog at https://blogs.sw.siemens.com/simcenter/fluid-structure-interaction-fsi-with-mechanical-contact-in-one-simulation-yes-in-one/