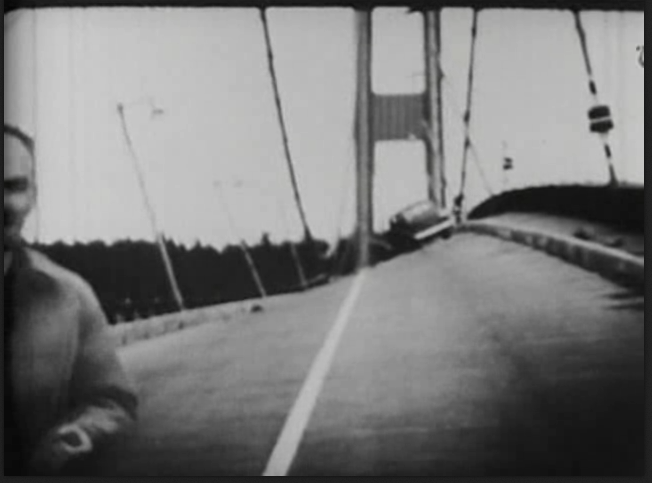 The 7th November 1940 was a particularly bad day to cross the Tacoma Narrow Bridge. At 11:00 am local time the bridge collapsed in a dramatic event. Barney Elliott, owner of a local camera shop recorded the collapse on  16 mm film (Link). My favorite scene is at about 1:40min. Despite heavy swaying a gentleman seems unconcerned and is walking calmly on the bridge! The fact that no one got injured is best described as a miracle. (Source: Wikipedia)

Both, flutter and LCO fall into the category of Fluid-Structure Interaction (FSI) behavior and both are examples of two–way coupled physics. The deformation of the structure impacts the flow, and the flow pressure impacts the structure. Unfortunately, two-way coupled FSI problems are particularly difficult to study because the solution in one domain depends on the solution in the other domain and vice versa.

Let’s travel back in time to the design process of the Tacoma Narrow Bridge. Let’s further assume we are fully aware that we have to consider flutter. It is around 1935, and pretty much all we can do is to build a model. The model has to represent the surface of the bridge accurately, which is doable even in 1935. But at the same time the model must have the exact eigenmodes and eigenfrequencies of the real bridge. In short, we have to get the entire mass distribution and stiffness right. But not only that, our model has to fit into the wind tunnel, and we have to scale the operating conditions with respect to our model size. All together an extremely challenging task, to say the least.

The Value of Simulation

Today we are no longer limited to experiments. With Simcenter STAR-CCM+ and Simcenter 3D it is straight forward to build accurate flow and structure simulation models. Not only that, the Simcenter Nastran to Simcenter STAR-CCM+ Co-Simulation allows us now to couple both models together. In short, the co-simulation executes the following operations automatically:

The co-simulation has been validated with the High Reynolds Number Aerostructural Dynamics (HIRENSAD) wind tunnel configuration of the 1st Aeroelastic Prediction Workshop. In the experiments reported in Ref. 1 the flow deforms the wing into a state of Static Aeroelastic Equilibrium. For the deformed wing lift and drag are report for different angles of attack. As you can see, the simulation results are in excellent agreement with the experimental data.

If you grow up close to a creek you may have played in the cold water during a hot summer day. Did you ever put a stick upright in the current and noticed that it starts to vibrate? I was recently reminded of such a childhood memory. I was standing hip deep in a river with heavy current, fishing for trout, and I was at the edge of loosing my balance. Suddenly my wading pole started to vibrate heavily.

What an exciting day! All the hours spend studying fluid and structure mechanics at the university would finally pay off! I knew the solution to my problem. It was as simple as changing the natural frequency of my pole, and all I had to do was to put more or less body weight on it. The change in tension (here compression) changed the frequency in the same way as tensioning a guitar string changes the tone.

For a little while I was happy, but then I realized that my situation had not improved. I was still standing in the middle of the river. I tried to comfort myself thinking that at least it was not the 7th November 1940 and I was not standing on a bridge.

4 Myths about AI in CFD April 6, 2021 As Artificial Intelligence (AI) has become more ubiquitous in our everyday lives, so too has confusion about what it is…
Foot on the Xcelerator: Simcenter helps Hendrick… November 13, 2020 Find out how Simcenter helped Chase Elliott claim Hendirck Motorsports' 13th NASCAR Championship
Is e-bike noise an issue? Quit whining! June 2, 2021 E-bikes become quite popular these days. Besides the operating range, also the generated noise is an important quality aspect for…