This blog is a continuation of a series of blogs related to the 2014 Wilson Research Group Functional Verification Study (click here).  In my previous blog (click here), I present verification results findings in terms of schedules, number of required spins, and classification of functional bugs. In this blog, I conclude the series on the 2014 Wilson Research Group Functional Verification Study by providing a deeper analysis of respins by design size.

It’s generally assumed that the larger the design—the increased likelihood of the occurrence of bugs. Yet, a question worth answering is how effective projects are at finding these bugs prior to tapeout. 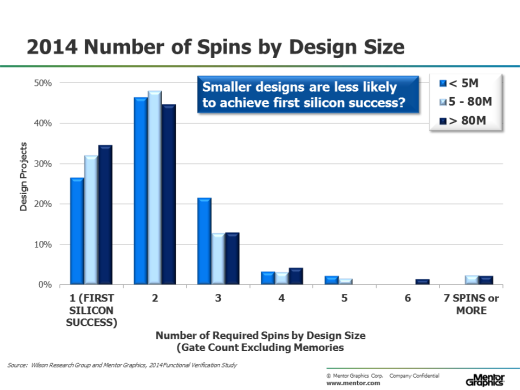 To understand what factors might be contributing to this phenomena, we decided to apply the same partitioning technique while examining verification technology adoption trends.

Figure 2 shows the adoption trends for various verification techniques from 2007 through 2014, which include code coverage, assertions, functional coverage, and constrained-random simulation.

One observation we can make from these adoption trends is that the electronic design industry is maturing its verification processes. This maturity is likely due to the need to address the challenge of verifying designs with growing complexity. 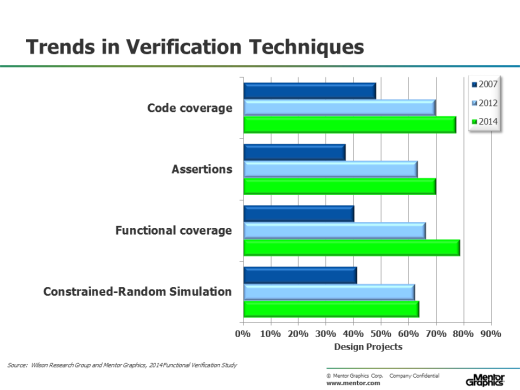 In Figure 3 we extract the 2014 data from the various verification technology adoptions trends presented in Figure 2, and then partition this data into sets based on design size (that is, designs less than 5 million gates, designs between 5 and 80 million gates, and designs greater than 80 million gates). 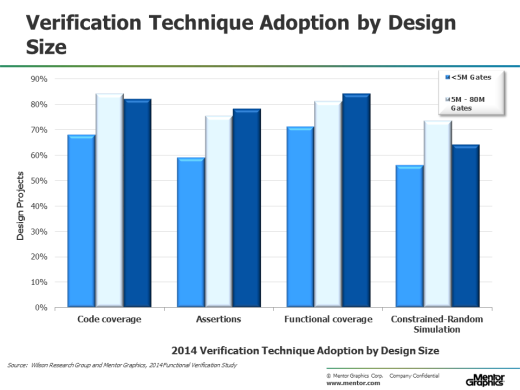 Across the board we see that designs less than 5 million gates are less likely to adopt code coverage, assertions, functional coverage, and constrained-random simulation. Hence, if you correlate this data with the number of spins by design size (as shown in Figure 1), then the data suggest that the verification maturity of an organization has a significant influence on its ability to achieve first silicon success.

As a side note, you might have noticed that there is less adoption of constrained-random simulation for designs greater than 80 million gates. There are a few factors contributing to this behavior: (1) constrained-random works well at the IP and subsystem level, but does not scale to the full-chip level for large designs. (2) There a number of projects working on large designs that predominately focuses on integrating existing or purchased IPs. Hence, these types of projects focus more of their verification effort on integration and system validation task, and constrained-random simulation is rarely applied here.

So, to conclude this blog series, in general, the industry is maturing its verification processes as witnessed by the verification technology adoption trends. However, we found that smaller designs were less likely to adopt what is generally viewed as industry best verification practices and techniques. Similarly, we found that projects working on smaller designs tend to have a smaller ratio of peak verification engineers to peak designers. Could the fact that fewer available verification resources combined with the lack of adoption of more advanced verification techniques account for fewer small designs achieving first silicon success? The data suggest that this might be one contributing factor. It’s certainly something worth considering.

This article first appeared on the Siemens Digital Industries Software blog at https://blogs.sw.siemens.com/verificationhorizons/2015/08/22/conclusion-the-2014-wilson-research-group-functional-verification-study/