Few verification tasks are more challenging than trying to achieve code coverage goals for a complex system that, by design, has numerous layers of configuration options and modes of operation.  When the verification effort gets underway and the coverage holes start appearing, even the most creative and thorough UVM testbench architect can be bogged down devising new tests – either constrained-random or even highly directed tests — to reach uncovered areas. 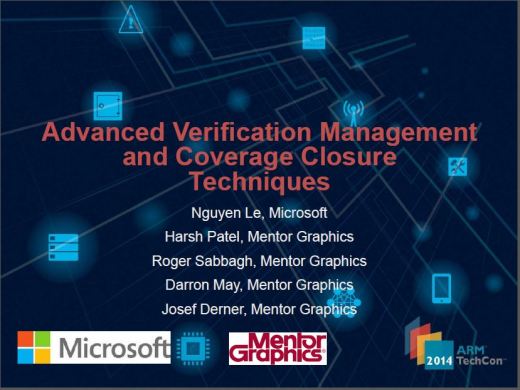 At the recent ARM® Techcon, Nguyen Le, a Principal Design Verification Engineer in the Interactive Entertainment Business Unit at Microsoft Corp. documented a real world case study on this exact situation.  Specifically, in the paper titled “Advanced Verification Management and Coverage Closure Techniques”, Nguyen outlined his initial pain in verification management and improving cover closure metrics, and how he conquered both these challenges – speeding up his regression run time by 3x, while simultaneously moving the overall coverage needle up to 97%, and saving 4 man-months in the process!  Here are the highlights:

* Pain points
— Code coverage: code coverage holes can come from a variety of expected and unforeseen sources: dead code can be due to unused functions in reused IP blocks, from specific configuration settings, or a bug in the code.  Given the rapid pace of the customer’s development cycle, it’s all too easy for dead code to slip into the DUT due to the frequent changes in the RTL, or due to different interpretations of the spec.  “Unexplainably dead” code coverage areas were manually inspected, and the exclusions for properly unreachable code were manually addressed with the addition of pragmas.  Both procedures were time consuming and error prone
— Verification management: the verification cycle and the generated data were managed through manually-maintained scripting.  Optimizing the results display, throughput, and tool control became a growing maintenance burden.

* New automation
— Questa Verification Manager: built around the Unified Coverage Database (UCDB) standard, the tool supports a dynamic verification plan cross-linked with the functional coverage points and code coverage of the DUT.  In this way the dispersed project teams now had a unified view which told them at a glance which tests were contributing the most value, and which areas of the DUT needed more attention.  In parallel, the included administrative features enabled efficient control of large regressions, merging of results, and quick triage of failures.

— Questa CoverCheck: this tool reads code coverage results from simulation in UCDB, and then leverages formal technology under-the-hood to mathematically prove that no stimulus could ever activate the code in question. If it’s OK for a given block of code to be dead due to a particular configuration choice, etc., the user can automatically generate wavers to refine the code coverage results.  Additionally, the tool can also identify segments of code that, though difficult to reach, might someday be exercised in silicon. In such cases, CoverCheck helps point the way to testbench enhancements to better reach these parts of the design.

— The above tools used in concert (along with Questasim) enabled a very straightforward coverage score improvement process as follows:
1 – Run full regression and merge the UCDB files
2 – Run Questa CoverCheck with the master UCDB created in (1)
3 – Use CoverCheck to generate exclusions for “legitimate” unreachable holes, and apply said exclusions to the UCDB
4 – Use CoverCheck to generate waveforms for reachable holes, and share these with the testbench developer(s) to refine the stimulus
5 – Report the new & improved coverage results in Verification Manager

* Results
— Automation with Verification Manager enabled Microsoft to reduce the variation of test sequences from 10x runtime down to a focused 2x variation.  Additionally, using the coverage reporting to rank and optimize their tests, they increased their regression throughput by 3x!
— With CoverCheck, the Microsoft engineers improved code coverage by 10 – 15% in most hand-coded RTL blocks, saw up to 20% coverage improvement for auto-generated RTL code, and in a matter of hours were able to increase their overall coverage number from 87% to 97%!
— Bottom-line: the customer estimated that they saved 4 man-months on one project with this process 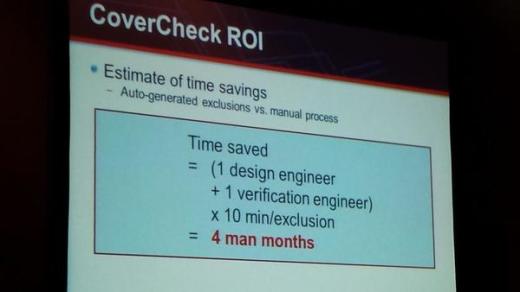 Taking a step back, success stories like this one, where automated, formal-based applications leverage the exhaustive nature of formal analysis to tame once intractable problems (which require no prior knowledge of formal or assertion-based verification), are becoming more common by the day.  In this case, Mentor’s formal-based CoverCheck is clearly the right tool for this specific verification need, literally filling in the gaps in a traditional UVM testbench verification flow.  Hence, I believe the overall moral of the story is a simple rule of thumb: when you are grappling with a “last mile problem” of unearthing all the unexpected, yet potentially damaging corner cases, consider a formal-based application as the best tool for job.  Wouldn’t you agree?

Leave the House With a Clean Design September 14, 2021 Wouldn't it be great if there were something that would stop you from leaving the house wearing mismatched clothes -…
The September Verification Horizons is Now Online! September 2, 2021 I'm really excited to share with you a very special issue of the Verification Horizons newsletter for September, 2021. The…
Getting your Safety Architecture just right February 4, 2022 Introduction In a recent industry survey, roughly 40% of ASIC and FPGA project starts had functional safety part of their…

This article first appeared on the Siemens Digital Industries Software blog at https://blogs.sw.siemens.com/verificationhorizons/2014/11/17/arm-techcon-paper-report-how-microsoft-saved-4-man-months-meeting-their-coverage-closure-goals-using-automated-verification-management-formal-apps/