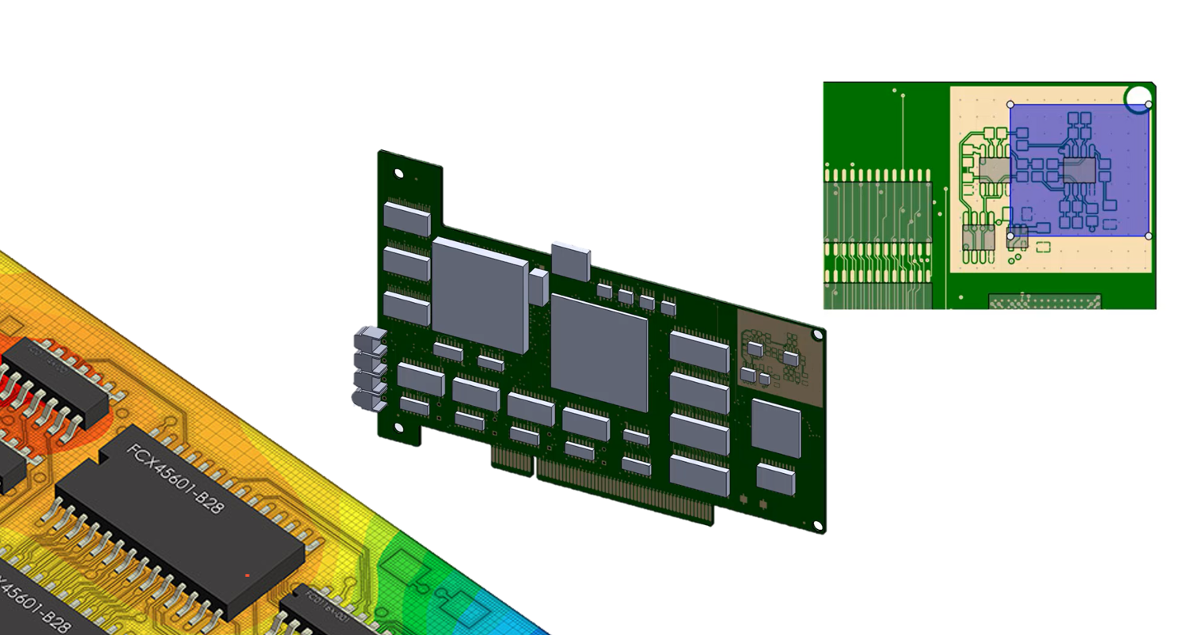 Learn how these enhancements help you to go faster and model the complexity in your electronics thermal management design process. I highlight for experienced users that there is a detailed video below illustrating the usage and benefits of the new Thermal Territories for copper trace modeling.

Model the complexity and go faster

What are Thermal Territories for PCB thermal analysis?

There are different levels of board thermal modeling fidelity available that can be applied to an entire PCB model. Selecting the best approach is a tradeoff on accuracy required vs time available for analysis; matching the level of PCB thermal modeling to the fidelity of component thermal models; or simply influenced by how early the analysis is in the design stage and the availability of fully routed board data.

Thermal Territories were first introduced in Simcenter Flotherm XT to provide engineers with the option to apply the highest level of copper trace modeling (explicit) for a specific area under key components (often in high copper density parts of the board) in order to fully capture key heat conduction paths. It is computationally more efficient to enhance PCB modeling fidelity under key components, than compared to applying fully explicit copper trace modeling to an entire board.

With the addition of two new Thermal Territory types, there are now three options available in Simcenter Flotherm XT:

The table below describes use cases for each and guidance on board and component modeling levels:

It is possible to mix Thermal Territories of Explicit and Layered (Detailed) modelling levels on the same board.

Please watch this detailed 9 minute video below where Thermal Territories are used to solve a challenge in modeling accuracy errors. These issues stem from an existing approach that is only using a fixed copper percentage distribution across an entire PCB and does not capture the influence of localized variations of conductor. Thermal Territories can help you realize appropriate accuracy within the time pressures of your PCB thermal analysis process.

To aid management of different nets there is also an improved Net Editor Window.

The EDA Bridge interface has been significantly updated and actual transfer time is much quicker from EDA Bridge to the Simcenter Flotherm XT (up to 2x faster).  These enhancements are illustrated throughout the earlier video above.

There is now an option to streamline handling of temperature dependent materials for the BCI-ROM export using material properties based on user request. A user can request a material correction to calculate constant properties from temperature dependent ones using a reference temperature. This is initiated using the new “Material Correction” feature to calculate the appropriate thermal conductivity based on the defined temperature for materials in a BCI-ROM export. These values used can be exported for examination.

A Cuboid Center Point for Point Goal creation is now available. You can create a point goal and it will automatically be added to cuboid SmartParts.

Additionally, any component imported from Simcenter Flotherm Package Creator into Simcenter Flotherm XT 2021.2 will include this new point and a Point Goal is automatically added to control the convergence for the solid temperature of a die part.

This also helps support the BCI-ROM export which requires at least one point goal.

Simcenter Flotherm
Blog: Simcenter Flotherm 2021.2 – find out the latest for thermal analysts
Includes insights on how to use Xcelerator Share for cloud based design collaboration between different functions in distributed engineering teams.

This article first appeared on the Siemens Digital Industries Software blog at https://blogs.sw.siemens.com/simcenter/simcenter-flotherm-xt-2021-2-whats-new/