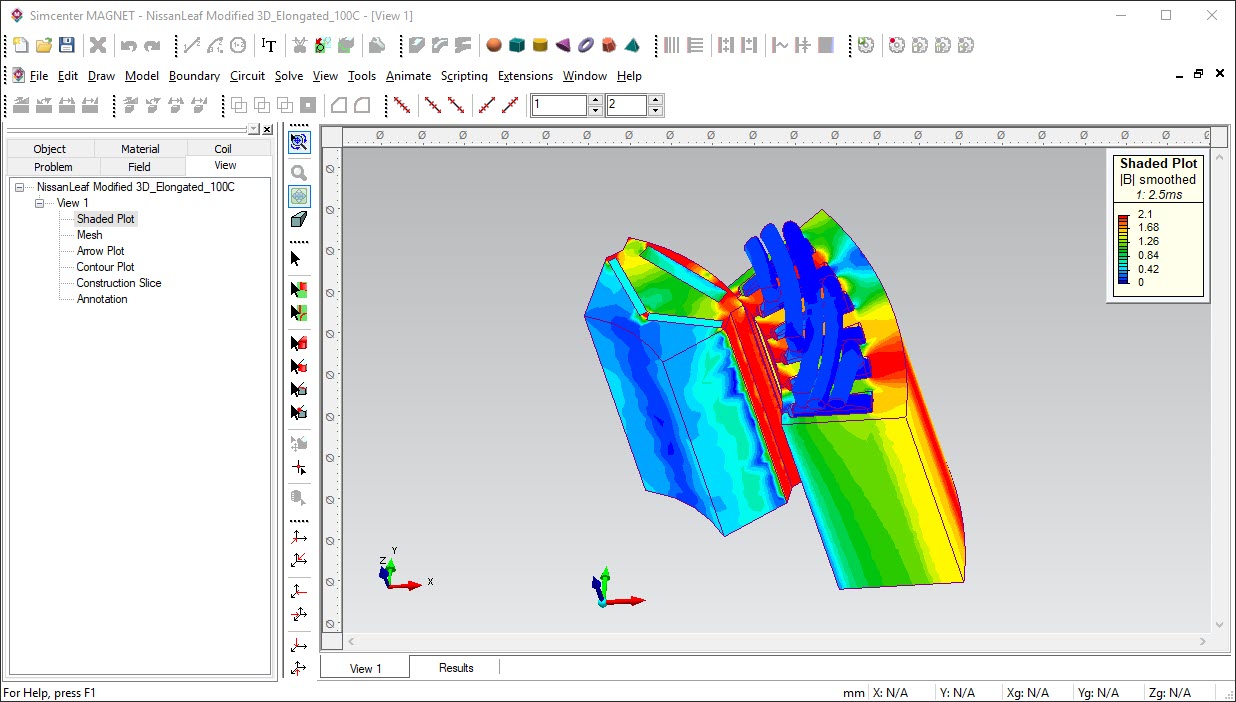 The shaded magnetic field plot of an EV type motor in Simcenter MAGNET 2020.1

Safeguarding the performance of electric devices containing permanent magnets (motors, generators, actuators, etc.) against demagnetization is an integral aspect of ensuring robustness of electric machines. Identifying the regions of permanent magnets that may be susceptible to demagnetization is a difficult modeling task. This is especially true in 3D, not least because it may result from both electrical and/or environmental anomalies. Simcenter MAGNET 2020.1 includes a new 3D demagnetization modeling capability. With this feature, you can take protective measures during any phase of the design process; well before physical prototyping.

Permanent magnet demagnetization is the change in the remanence (the magnet’s strength) and the coercivity (the field needed to demagnetize it completely) of magnets (see Figure 1). The changes can happen from elevated temperature or if a high enough magnetic field opposes the magnet’ intrinsic fields (due to electrical faults). During a machine’s operation demagnetization may take place dynamically and must be tracked continuously.

Hence, machine designers must carry out coupled electromagnetic-thermal simulations and/or simulations of electric faults (short circuits, etc.) to assess the feasibility of demagnetization and take preventative steps early in the design process. For 3D devices demagnetization calculations can be especially difficult. This is because demagnetizing effects of esoteric end-turn geometries such as a hairpin or involute configuration are difficult to compute.

Two examples will help illustrate. The first is related to the aerospace industry, and the second for the automotive industry.

An axial flux motor developed as an e-taxiing motor for the Airbus 321 aircraft is shown in Figure 2. It is a 10 pole 12 slot machine that is inherently a 3D electromagnetic device.

For this machine, here are the demagnetization proximity field at 20 degrees (left) and at 100 degrees Celsius (right).

There is a marked difference between the results. When the temperature reaches 100 degrees, parts of the magnet (seen in bright yellow) will weaken. In Figure 4, we see the impact on the cogging torque. The ability to differentiate the effects of temperature changes on the cogging torque due to demagnetization is a testament of MAGNET’s modeling capability to capture even the finest changes to a machine’s performance from this phenomenon.

Figure 4: The effects of demagnetization on the cogging torque of the 10-12 axial flux machine

Next, let’s consider the effects of demagnetization on the Prius motor. Notice the prominent 3D winding end-turn geometry of the model.

First, the effects of demagnetization on the torque or power output from current surges will be considered. Then, the effects of system faults that results in an irreversible demagnetizing effect on the magnets will be examined. For the first scenario consider the case of a current surge (an abrupt increase in the current waveform) of the motor.

Figure 5: The partial model of a Prius motor (left) and a current surge (right)

Figure 6: The magnet segments demagnetized (left) and the effects on torque output (right)

Another potential impact of demagnetization is the irreversibility of the loss of remanence. Often, after a fault, the power system may recover and the current/voltage load returns to their rated values. It would be ideal if the effects of demagnetization were reversible and the magnets retain their original remanence after such an event. Unfortunately this is not the case; the magnets require remagnetizing which is an expensive proposition. A machine designer must be able to simulate and predict the effects of such events and take measures to safeguard against eventualities requiring expensive maintenance. The following example illustrates this.

Figure 7: The back EMF profile of the Prius machine before and after a short circuit event

Transient simulation of the magnets undergoing partial but irreversible demagnetization.nt

For modern machine designers the ability to predict the effects of demagnetization and take preventative measures are critical aspects of ensuring robust machine performance. Simcenter MAGNET 2020.1 can fully model these effects in 3D. They will help the next generation of machine designers achieve their design goals giving ample confidence that the machine’s magnets will be protected under adverse conditions.

4 Myths about AI in CFD April 6, 2021 As Artificial Intelligence (AI) has become more ubiquitous in our everyday lives, so too has confusion about what it is…
Using Drive Cycles in Motor Design Software November 30, 2020 Using drive cycles with your motor design software and high performance computing (HPC) lead to better designs and a shorter…
Simcenter™ FLOEFD™ 2021.1: What’s New? April 29, 2021 What's New in the latest Simcenter FLOEFD 2021.1 version? Electromagnetics, structural simulation and much more. Find out for yourself.
This article first appeared on the Siemens Digital Industries Software blog at https://blogs.sw.siemens.com/simcenter/saving-your-permanent-magnets-from-demagnetization/