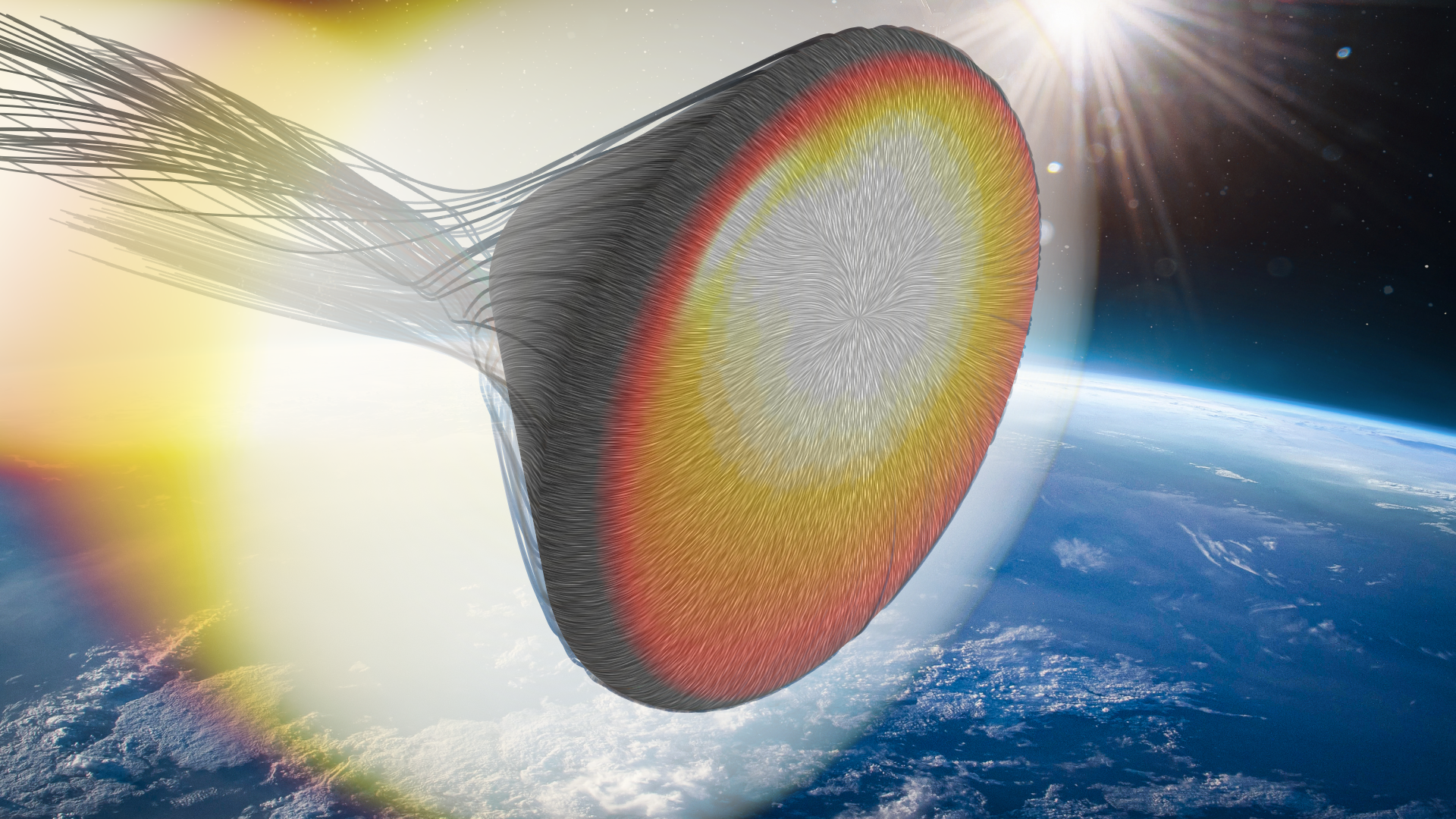 – Every CFD engineer who dreamed of becoming an astronaut

Some of us have been lucky in life to have a defining moment. The moment something clicks, and we see our future selves and the part we want to play, the career we want to have. (Bear with me. I’ll get to the carbuncle effect and hypersonic cfd simulations in a minute).

I knew I wanted to design airplanes since I was 10. I got to fulfil my dream indirectly by doing CFD and adjoint optimization. But this is not my story.

This is the story of my dear friend and colleague Scott Wilensky. Scott had his defining moment while on a family trip to the Kennedy Space Center in 1980s. As a kid, Scott witnessed the Saturn V up close, the launch system that ferried our astronauts to the moon. From then on, he was hooked. He knew he wanted to be an astronaut.

Throughout his childhood, he learned as much as he could about NASA, started collecting toys, and even wrote a letter to President Ronald Reagan to get more information about the “STAR WARS” missile defense program that was in the news at the time!

Of course, not everyone becomes an astronaut, but as he excelled in science and mathematics, he went on to study aerospace engineering. He is now an excellent engineer in our aerospace team, demonstrating the value of Simcenter STAR-CCM+ to our customers, while supporting them with their applications. This team has done some great work on high speed aerospace engineering, and we are now capable of accurately predicting some of the intense conditions that can take place for a spacecraft returning to the Earth. Scott maybe didn’t get to go to the moon but has a career that he could be proud of. A career which allows him to contribute to the science of space travel and hypersonic flow on a daily basis.

Working in the Simcenter STAR-CCM team, we might not be launching rockets; we do however launch new exciting releases every 4 months. In the last several years, we have made great strides in improving our solvers. Starting with Automatic CFL in 2020.1, we made our coupled solver effortlessly faster and easier to use (check my blog Effortless convergence in CFD. It will make your day!) and we are continuing in every release to add incremental improvements. Aside from the solver, further overall software improvements in the aerospace area can be found in Chris‘s blog Automatic (CFD) for the People. In this upcoming release of Simcenter STAR-CCM+ 2021.2, we are releasing another aerospace dedicated enhancement.

The Carbuncle effect refers to numerical solution anomalies produced by high-fidelity discretization in (very) high speed flows (hypersonic regime). Solution mesh misalignment and imperfections exacerbate the solver flux’s sensitivity to produce undamped spurious vorticity and shock-wave deformations, which affect the flow and temperature field downstream of the bow-shock, all the way to the surface, thus producing uneven and spurious temperature and wall-shear distributions. Most flux‐difference splitting including the AUSM family of schemes produce the Carbuncle phenomenon on both structured and unstructured grids.

In Simcenter STAR-CCM+ 2021.2 we improved the surface temperature distribution of objects in hypersonic flows (mainly in the stagnation region behind the strong shock) with a new formulation of the AUSM+ Flux-Vector Splitting inviscid flux scheme. With the new scheme surface heating is perfectly symmetric as flow goes past it and surface temperature is independent of discretization, thus mitigating the carbuncle effect. Additionally, we improved the overall convergence for flow and thermal simulations in supersonic or hypersonic regimes, bringing back reliability in the CFD solution for physically demanding flight conditions.

What does mitigating the Carbuncle effect mean for the aerospace community?

Accurate shock and surface heating predictions are critical when designing hypersonic vehicles. The Carbuncle effect makes CFD unreliable in certain areas of the flow and without reliable CFD the aerospace community is only reliant on experimental testing in high-speed wind tunnels and prohibitively expensive unmanned fight tests.

The Space Shuttle Columbia disaster was a fatal incident in the United States space program that occurred on February 1, 2003, when the Space Shuttle Columbia disintegrated as it re-entered the atmosphere, killing all seven crew members. The accident was caused by a hole that was punctured in the leading edge on one of Columbia’s wings compromising the heat protection system. During the intense heat of re-entry, hot gases penetrated the interior of the wing, likely compromising the hydraulic system and leading to failure of the control surfaces. The resulting loss of control exposed minimally protected areas of the orbiter to full-entry heating and dynamic pressures that eventually led to vehicle break up.

With more reliable CFD, engineers can run production cases involving shocks and aerothermal heating. These flight envelopes also include high pressure gradients, including air chemistry, for re-entry capsules, hypersonic vehicles and defense mechanisms. It allows them to dig into the science and analyze (not guess) the safety of the capsules’ heat shield. With accurate CFD you can test more permutations and scenarios in an inexpensive manner in order to introduce better aerothermal heating on aircraft or missile surfaces. This helps introduce heat shield or skin protection designs with increased safety and reduced cost.

The Apollo 11 mission is among the best remembered space missions for it enabled human beings to set foot on our natural satellite, the moon, for the first time. The amount of testing that went into the design and fabrication of the Apollo command module heat shield was significant. We used Simcenter STAR-CCM+ to replicate re-entry conditions for the command module and simulate the thermal environment of the heat shield. Had similar CAE capabilities existed at the time a great deal of expense would likely have been avoided. Fortunately, going forward we can now use the latest technology available in Simcenter STAR-CCM+ to reliably replace some of this expensive physical testing.

Scott is no longer the 8-year-old boy, who gazed with awe at the moon rocket, all those years ago, at Cape Canaveral. But working with him, I have had the privilege to get to meet the little boy he once was; every time he gets excited with a new feature that will help our customers, or when he solves a problem for them. Are you lucky enough to feel like that? If yes, to the ever-aspiring little astronauts you once were, I hope you’ll enjoy our new launch!

Simcenter STAR-CCM+ 2021.2 Released! What's new? June 29, 2021 Simcenter STAR-CCM+ 2021.2 delivers new features across the entire simulation workflow to help you engineer innovative and better performing products,…
COVID-19 and CFD simulation for planes, trains and… January 6, 2021 Covid-19 CFD simulation The coronavirus (COVID-19) pandemic has spurred the global community into action unlike any other time in recent…
10 insights from rocket CFD for a mind-blowing moonshot July 29, 2021 This is your guide to a successful moonshot project - with 10 insights that only rocket CFD (Computational Fluid Dynamics)…

2 thoughts about “Mitigating the Carbuncle effect for hypersonic CFD simulations”

This article first appeared on the Siemens Digital Industries Software blog at https://blogs.sw.siemens.com/simcenter/mitigating-the-carbuncle-effect-for-hypersonic-cfd-simulations/