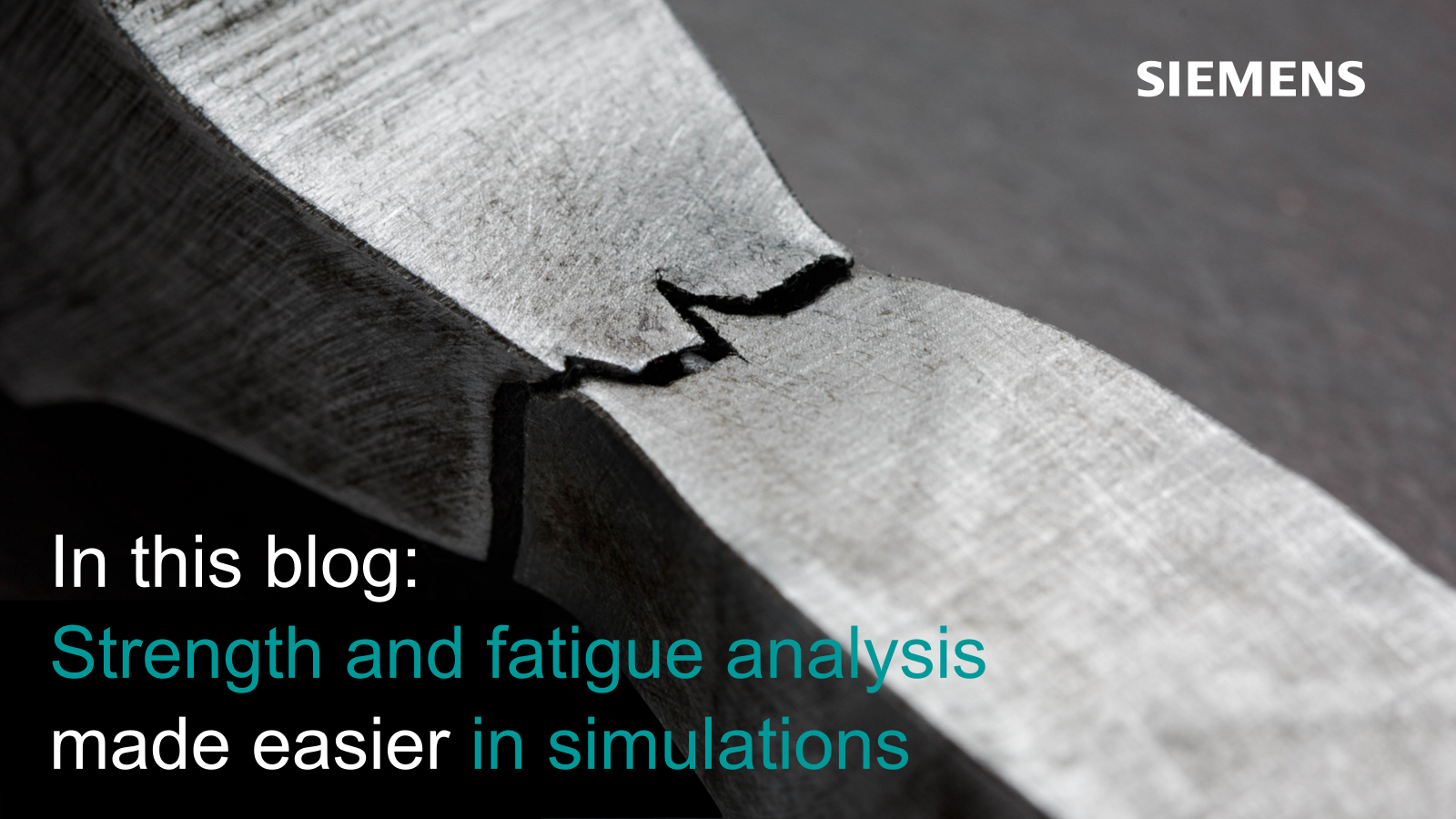 Templates for fatigue analysis and their strength-only counterparts are relatively recent additions to Simcenter 3D. As a result, many engineers are unaware of them or the benefits that they can bring. In order to provide you with a practical example we revisited an old friend, to see how he was using the tools to his advantage.

Do you remember the story of young engineer Isambard? He learnt to conduct strength analysis with Simcenter 3D Durability, which removed many monotonous tasks and streamlined his process to the final report.

Now, these reports, including the analysis of the whole component, are just a few clicks of the mouse away.

Now considered an expert in the team, Isambard’s new role allows him to focus on what he has proven to be his strength. Primarily the analysis of the processes required to complete a strength and fatigue analysis, then streamline the processes and document the new way the team should work. Since management had confidence in him, they asked him to do it for all the company’s worldwide engineering departments.

Like in the case of Ann-Christine, he quickly learned that there are different regulations but also slightly different methods in other countries and for various applications.

“I had assumed there would be variables, but this is much more than I anticipated,” Isambard revealed to us. He went on, “ because I didn’t think the nice reduced Strength analysis I used for stress data and based on the high-cycle fatigue methods would work. I had to check if the additional tools required were also available in Simcenter 3D.”

When talking to his contact at Siemens, he got good news: the stress-based strength analysis was just the first step of their development, and he was invited to test out the new functionality.

His first step was to just open the solution window, and he gave us his account:

“I remember saying aloud ‘Wow, nice new toys!’ then thinking to myself, ‘Not only are there all the typical fatigue analysis templates but now there is a Strength-only counterpart. This will make my job much easier.”

Once he had tested a few of the features he concluded that this update is great for the work he was doing, but what about others? He decided to call Ann-Christine to see if there is anything he can check for her. She told him that besides the well-established FKM guideline, there is a new one on non-linear analysis using strain-life methodologies. For many years his company has been in close contact with the same Siemens support expert, so he contacted the expert to ask.

The expert replied, “I am happy to report that the needed technology for strain-life fatigue has been available for some time. With regards to the strength analysis, the material overwrite tool has been enhanced to adapt the strength values,” also in the email are the following images:

So Ann-Christine will be happy. But there are more on his list: In his last project, before his promotion, he pre-loaded a component to define mean stress. Instead of adding this pre-load to every finite element load case to analyze for strength, he learned that he could use the superposition event to add the pre-load without re-running FE. That again saved time, much time, but he thought: “this superposition event is so powerful but quite complex for my case. Why can’t I just add this to my simple workflow?” – “Ideally, I would Just open the block-load event” so he checked to see if it is possible in the new software.

“There it was in the new version,” He told us, “it was like the siemens developers could read my mind.”

We went with Isambard on a break during which, he spoke to other users, one of whom was Ingeborg. Ingeborg is interested in temperature-based non-linear analysis. Isambard explains to Ingeborg what he has been working on. “That’s interesting – my colleagues in Sweden do similar things and need to do strength and fatigue on their models. Can you show me how to do it in Simcenter3D?” She opens her laptop, and their discussion becomes a working break.

With the new analysis templates and the possibility to use non-linear stress and strain results directly, this should be no problem.

So Isambard shows Ingeborg how to put her FE results into a transient event and use the new strain-based strength analysis. They use the option to read both stresses and strains from FE and add the necessary material data. First, they appear to be the same results that Isambard got in his stress-based cases. However, with a second glance, Isambard notices that they are results for the max and min strain and the strain amplitude. “That is a handy addition,” he avows.

While playing with the software to see what else they can do, they discover how to use the temperature results by just adding one check mark and how easy it is to set up the material parameters with temperature dependency.

To do this, they just re-run the analysis, which gave them the new temperature-dependent results and an overview map containing the max and min temperatures of the model. “But I would need to know at what temperature the maximal degree of utilization occurs,” Ingeborg states. With both of them unsure of what to do, they contacted the expert again.

“No problem – just create the new degree of utilization function and temperature functions at the critical node,” replies the expert. He invited them into a call and shared his screen. He then showed them how to add the function definition and evaluate it so that in less than a minute, they could create the static degree of utilization plot. As an added extra, he also showed them how to use the parametric plot tool to plot this result against the temperature.

“That’s fantastic!” Ingeborg announces, and Isambard joins her for a high five. They both realize they are still in the office and feel a little embarrassed as they feel the eyes of others look at them. “This is exactly what my Swedish colleagues will need,” she asserts “what other customer problems do you think we can help with the new features in Simcenter 3D?” They share a knowing smile and quickly turn back to their laptops for a fun afternoon of playing with the new features.

before we left Isambard admitted to us that he was going to set himself two new rules to ensure he gets the most out of his Siemens licenses:

The Fatigue Challenge of Additive Manufacturing: A… March 30, 2022 Additive Manufacturing (AM), also known as 3D-printing, allows the production of complex components layer by layer, using only the material…
Thermal fatigue: some hot features in Simcenter 3D… June 24, 2021 Read more about the new features for thermal fatigue in Simcenter 3D Durability
Strength and fatigue analysis in Simcenter 3D 2206 June 8, 2022 An efficient setup gives you the right answers at your fingertips Strength and fatigue analysis has historically been the domain…

This article first appeared on the Siemens Digital Industries Software blog at https://blogs.sw.siemens.com/simcenter/assess-your-fatigue-analysis/