Is my car trying to tell me something?

This past Friday was the beginning of a two day internal functional verification meeting at Mentor Graphics corporate headquarters on Intelligent Testbench Automation (iTBA).  (Mentor’s iTBA product, Questa inFact is hot and getting hotter.) After getting to my car to return home at the end of the first day, I was thinking that the large interest in this technology – demonstrated by a standing room only training event – has got to be a tipping point indication for iTBA.

I turned my car on.  (Actually, I “pushed” it on as there is no place to put a key to turn anymore.) 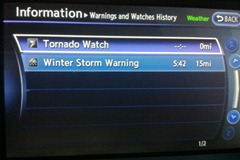 Moments after starting my car a winter storm alert interrupted the music on the radio and displayed two notices.  One I am familiar with when the temperature falls and snow begins to collect on the mountain passes.  I’m not going to drive in the direction of the snow, so no problem.  The other alert was of grave concern.  It was a tornado watch.  And the tornado watch was not off in some other direction many miles away, it was “0 miles” from me.  I looked up, I scanned the horizon and dark black was in one direction and sun in the other.  I changed the radio channel to a local AM evening drive station, but no mention of a tornado watch.  I headed in the direction of the sun.  It seemed the safest direction to head.  But before I did, I snapped a quick picture as proof I actually read “Tornado Watch” on the car’s navigation screen.

I returned to ponder if functional verification has just gotten too big for current techniques that iTBA is going from a nice to have, to a must have.

Several years back it was popular to brag about the compute farms & ranches one had.  With 5,000 machines here and another 5,000 machines there it seemed a sane demonstration of one’s design and verification prowess.  But this gave way to 50,000 multicore machines and who is talking about this with pride?  All talk is out of necessity.  And what about the next step?  Who has 500,000 or 5,000,000 on the drawing board or in their data centers?  Looking around, it seems very few admit to more than 100,000 and even fewer have more than 500,000.

Verification may be in crisis, as many will say, but it you hold verification technology constant, it is not in crisis, is on a  collision coarse with disaster.  Addressing this crisis has been the theme of many of Mentor Graphics CEO Wally Rhines’ keynotes at DVCon.  His 2011 keynote was taken to heart by many who attended.  The need to improve by a several orders of magnitude the “Velocity of Verification” has been followed by several examples over the year.

One example was shared several months after DVCon when Mentor Graphics and TSMC announced we had partnered to validate advanced functional verification technology.  While not all test results at TSMC or our common customer, AppliedMicro, were revealed, one of the slower tests demonstrated the value of iTBA to shorten time-to-coverage by over 100x.  Even days after that announcement we disclosed Mentor’s Veloce emulation platform offered 400x OVM/UVM driven verification improvement.

100x  and 400x seem like a large numbers, but it appears even bigger when you put it into the context of the time it was measured.  With current constrained random techniques, a project that takes 6 weeks of simulator run time to reach 100% closure can reach it in about 10 hours with Questa inFact or about 2.5 hours with Veloce.  Instead of using complex scripts to peek in on a simulation run over the course of a month and a half, a verification team could actually leave work for the day, return the next morning and have a full, complete and exhaustive verification run.  And when even faster turnaround time is needed, emulation returns results during the work day.

Wally’s DVCon 2011 keynote referenced 8 customer results coming from Mentor’s Questa inFact tool.  Many more have discovered what this can do for them as well.  And with each success, come the requests from more to see what it can do for them.

But changing the “Velocity of  SoC Verification” has not rested on one technique alone.  Stop by the Mentor Graphics DVCon booth and we can share with you the advances we have made to address system-level verification since last year.

Which brings me to the point of the “Tornado Watch.”  As I pondered the iTBA tipping point, about “how little things can make big differences” as can be found in Malcolm Gladwell’s book, my car must have been channeling Geoffrey Moore of  “Crossing The Chasm” fame instead.  For that reason it must have issued the Tornado Watch.  Could it be that iTBA is set to cross the chasm from early adopters to the early majority?

And thankfully, I don’t think my car is programmed to issue tipping point warnings, nor do I want to see if it can.

In the end, it will be with the benefit of hindsight that let’s us know if we are crossing the chasm into the tornado or not now or soon.  But for Mentor’s part, full and advanced support of iTBA technology with Questa inFact is ready now, and we are set to cross the chasm into the tornado.   My colleague, Mark Olen, blogs about iTBA here.   If you have not had a chance yet to read his blog on iTBA delivering 10x to 100x faster functional verification, it is worth the time to do so.  You can look for him to give frequent updates on iTBA and comment on the positive impact is has on SoC design and verification teams in the months ahead.

I look forward to seeing you at DVCon.

PCIe® Gen6 verification - the PCI Express® generation comes… May 20, 2021 Billions of us today – regardless of which Generation we belong to, Gen-X, Gen-Z, Millenials, Generation-Alpha – use PCI Express®…
Leave the House With a Clean Design September 14, 2021 Wouldn't it be great if there were something that would stop you from leaving the house wearing mismatched clothes -…
TLM 1.0 in pyuvm October 1, 2021 This blog post is part of a continuing series discussing Python as a verification language. You can find links to…

This article first appeared on the Siemens Digital Industries Software blog at https://blogs.sw.siemens.com/verificationhorizons/2012/02/21/tornado-alert/