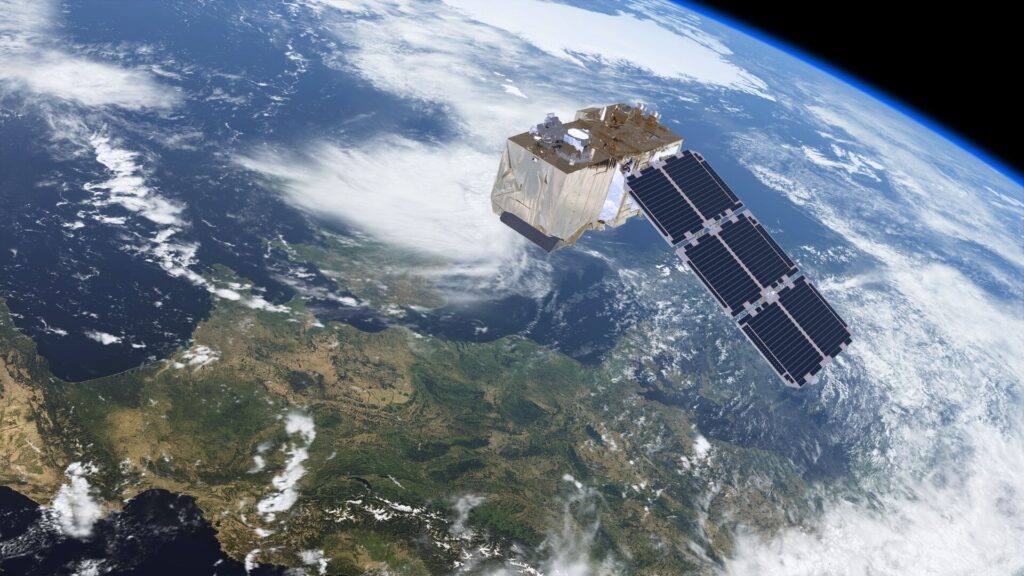 You may wonder what the development of cars has in common with the development of satellites. Cars are optimized for the road, while satellites are optimized to function from space. Actually, more than you might think at first. One of them has to do with vibrations, of course. Fighting these pesky troublemakers is an ongoing challenge for both car and space engineers. In cars, for example, powertrain or tire vibrations can ruin the driving pleasure by causing annoying noises (e.g., gearbox whine) or steering wheel vibrations(e.g., steering wheel shimmy).

For satellites, minimal vibrations are known as micro-vibrations (induced, e.g., by spinning reaction wheels or gyroscopes ), can jeopardize the entire mission by causing blurry images from Earth observation cameras, alignment problems of optical transmission, or telescope jitter during deep space exploration. Can you imagine the impact this would have on a mission of a scientific spacecraft like the James Webb telescope (launched on December 25, 2021) that is placed so far from Earth that it can’t even be served anymore? That would be an absolute disaster, both financially and scientifically, given that the mission is estimated to cost $10 billion and thousands of engineers were involved in developing the project over the last three decades.

In this blog, I would like to focus on an innovative technique using blocked forces, which is rapidly gaining popularity in the automotive industry today, as a potential technology that could help optimize spacecraft for micro-vibrations. But before we go into more detail, let’s take a look at the micro-vibration requirements and technical challenges of space and Earth science missions first.

Every satellite requires numerous drives, position controls, reaction wheels, actuators, and cryo-coolers: the list could go on. These devices comprise mechanical components that cause small-amplitude mechanical vibrations, known as micro-vibrations. These internal mechanical disturbances are transmitted from their source through the vehicle’s structure to the sensing elements in the payload’s instruments. Depending on the nature of the transfer, the spacecraft structure will either amplify or attenuate the disturbances.

With the trend towards high-performance optical payloads with highly vibration-sensitive scientific or observation instruments, strict requirements are imposed on allowable levels for these unwanted onboard disturbances.

Micro-vibration engineering history can be traced as far back as the mid-1970s when NASA studied architectural concepts for the so-called Large Space Telescope (LST), which was to later become much better known as the Hubble Space Telescope. At that time, Sperry Flight Systems was asked to measure the vibrations of a reaction wheel to serve as input for the first studies on the LST to their prime contractors.

The typical approach to ensure micro-vibration design targets are not exceeded involves extensive analysis, modeling, simulation, and comprehensive ground-based testing at both the component and subsystem levels (e.g., disturbance source characterization testing) and at the integrated system level to assess end-to-end performance.

An innovative method to assess micro-vibration performance at satellite-level

Correctly solving micro-vibration problems requires system-level engineering using FEM models of the spacecraft. However, the accuracy of the predictions strongly depends on the fidelity of the models, especially for the higher frequency range (above 100Hz ).

To provide an alternative to system-level performance assessment, especially when FEMs are missing or inaccurate, we developed a new technology that has received a lot of attention within the automotive industry based on the concept of blocked forces and virtual prototype assemblies to evaluate the system-level performance of active sources. Basically, it can be applied to any mechanical system, be it a car, an airplane, a boat, or a satellite.

The advantage of this method is that it does not require FEM models but only blocked forces, frequency response functions (FRF), and mount stiffness data when also mounts are involved.

In short, this approach allows the characterization of an active source component (e.g., a reaction wheel) independent of the receiver structure. It will enable the prediction of its performance when coupled to a receiver structure (e.g., a satellite).  The source characterization can be done on a force measurement platform using a Simcenter SCADAS data acquisition system and Simcenter Testlab software.

The complete process of virtual prototype creation is part of our Simcenter Testlab VPA (Virtual Prototype Assembly) application. It enables engineers to create comprehensive digital twins of the satellite assembly to accurately predict micro-vibration performance at every stage of the development cycle of the spacecraft.

Below is a video demonstrating this process for an electric motor-vehicle assembly using experimentally derived models.

Since solving micro-vibration problems of spacecraft requires a lot of matter expertise, several engineering disciplines are involved. This tool provides a user-friendly environment that enables easy collaboration and makes the virtual vehicle accessible to everyone. It allows one to estimate the impact of their own customization at the system level with a simple click. It uses sub-structuring techniques that enable the engineers to quickly and accurately calculate predictions by combining the source models with the FRF assembled system.

So, are you curious to learn more details about this technology?

Maybe one day this technology will be part of your engineering tools to optimize the next-generation satellites for micro-vibrations.

I think the benefits and gains are apparent. It allows predicting the performance of onboard disturbance sources even before they get physically integrated onto the satellite, enables early detection of potential micro-vibration issues and system optimization in the early design phase. Moreover, it can be used with numerically and experimentally derived models, which is advantageous when reliable or validated FEM models of micro-vibration sources or satellites are unavailable.

Some time ago, I wrote a blog post where I discussed in more detail the concept of blocked forces and their application to predict system-level targets. A white paper on this topic is also available and can be found here.

A webinar on micro-vibration testing will be organized as part of an online Environment Testing master class on March 17, 2022. For the registration link and further details click below:

TAKE ME TO THE WEBINAR MASTER CLASS

If you have any questions or want more information about this solution, you can reach me at this address mostapha.choukri@siemens.com .