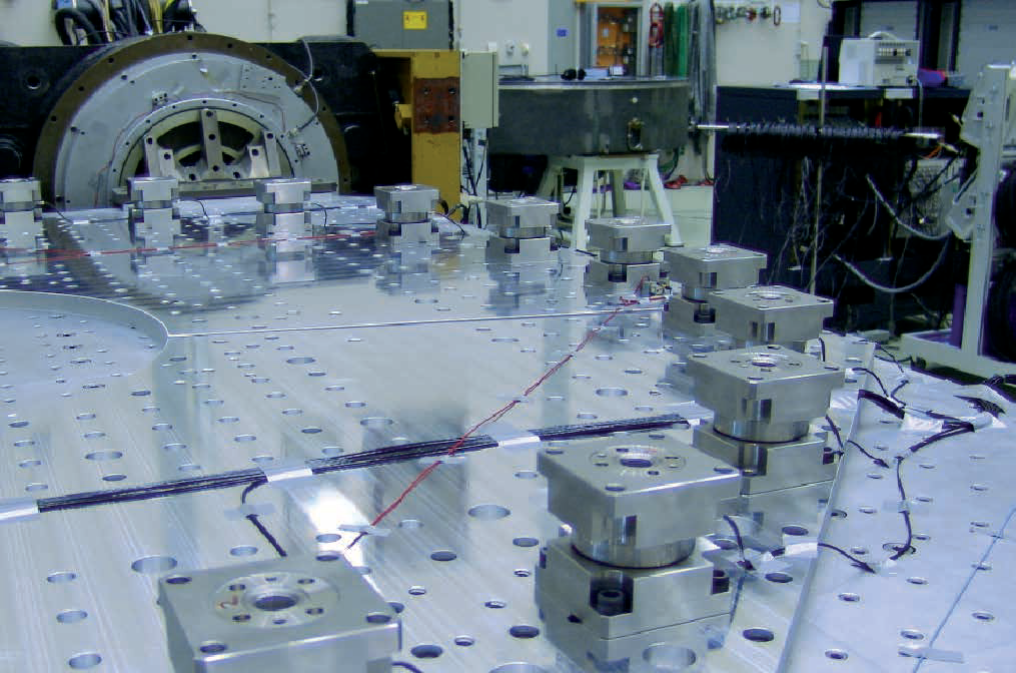 Due to its high value, satellite vibration qualification tests are among the most monitored and carefully conducted tests in the world. Since these tests are performed on real flight hardware, avoiding over-testing is of critical importance as it can result in unnecessary destruction or unwanted fatigue of the test specimen. Unfortunately, the industry is full of examples where satellites and spacecraft have been damaged during such tests.

To protect these one-of-a-kind or expensive test objects notching or limiting is used to prevent over-testing and excessive loading of the satellite or spacecraft structure. This is done by limiting the response levels at key locations on the test item or on the shaker system by reducing the drive signal at the offending frequencies.

However, notching also carries the risk of under-testing the spacecraft with all possible consequences during launch or use in space. Especially notching that is performed to limit local accelerations for the purpose of protecting equipment, instruments or subsystems is therefore always agreed with the customer when it can be proven that unreasonable over-testing will occur if not applied.

On the other hand, “force limiting”, as notching is called when applied to force, is the most widely accepted method of notching within the aerospace industry. It is a relatively new technology, first put in use at the Jet Propulsion Laboratory in 1990 after the mechanical failure of an aerospace component during a vibration test. Today force limiting is used in almost every major space lab worldwide. The basic ideas behind force limitation have been in the literature for decades, but the emergence of piezoelectric force transducers needed to easily implement force limitation has accelerated the implementation of the method over the last decades.

One of the most advanced Force Measurement Device (FMD) is in use at the European Space Agency and uses in total up to 24 individual tri-axial force-links measured on a state-of-the-art Siemens controller system.

A typical FMD consists of two rings connected by force links that each measure the dynamic forces in the three directions. The signals are conditioned by charge amplifiers and the outputs are then combined in real-time by a computing unit generating three forces and three moments. These six output channels are then available for either data acquisition or for vibration level control. These configurations are very reliable and have demonstrated safe spacecraft qualification testing.

By extending the data acquisition capability of the Simcenter SCADAS hardware with the Simcenter SCADAS VCF4 module, force cells from the FMD can be connected directly to the control system omitting the need for external charge conditioning boxes. This arrangement immediately detects faulty load cells and thereby eliminates the risk of notching on inaccurate resulting force and moment signals.

The global forces and moments are generated within Siemens Testlab software using derived software channels, eliminating the need for summation boxes or real-time platforms. Moreover, the derivation of the equations for the forces and moments is simplified thanks to a geometry-based tool that allows deriving this automatically, which means a lot of relief for the user

Do you want to learn more?

Siemens Digital Industries, the leader in vibration control and acquisition systems has worked together with the space industry to develop, test, and optimize new hardware, such as the VCF4 module, and software that provides maximum confidence in mission-critical testing of satellites and spacecraft.

Learn more about notching and limiting in this article.

New DFAN (Direct Field Acoustic Noise Testing) as a service… July 12, 2021 How many decibels (dB) are emitted during a spacecraft launch? According to NASA, the answer is up to 220 dB.…
DFAN testing: Resist the direct acoustic field for a ticket… April 1, 2021 Read about Direct Field Acoustic Noise (DFAN) testing of space hardware. Learn where we came from and where we are…
Spacecraft acoustic testing: safe and sound into space September 19, 2022 Read about spacecraft acoustic testing, satellite testing, dynamic environmental testing, and other space-related physical tests here.
This article first appeared on the Siemens Digital Industries Software blog at https://blogs.sw.siemens.com/simcenter/force-limiting-test-your-spacecraft-but-dont-destroy-it/