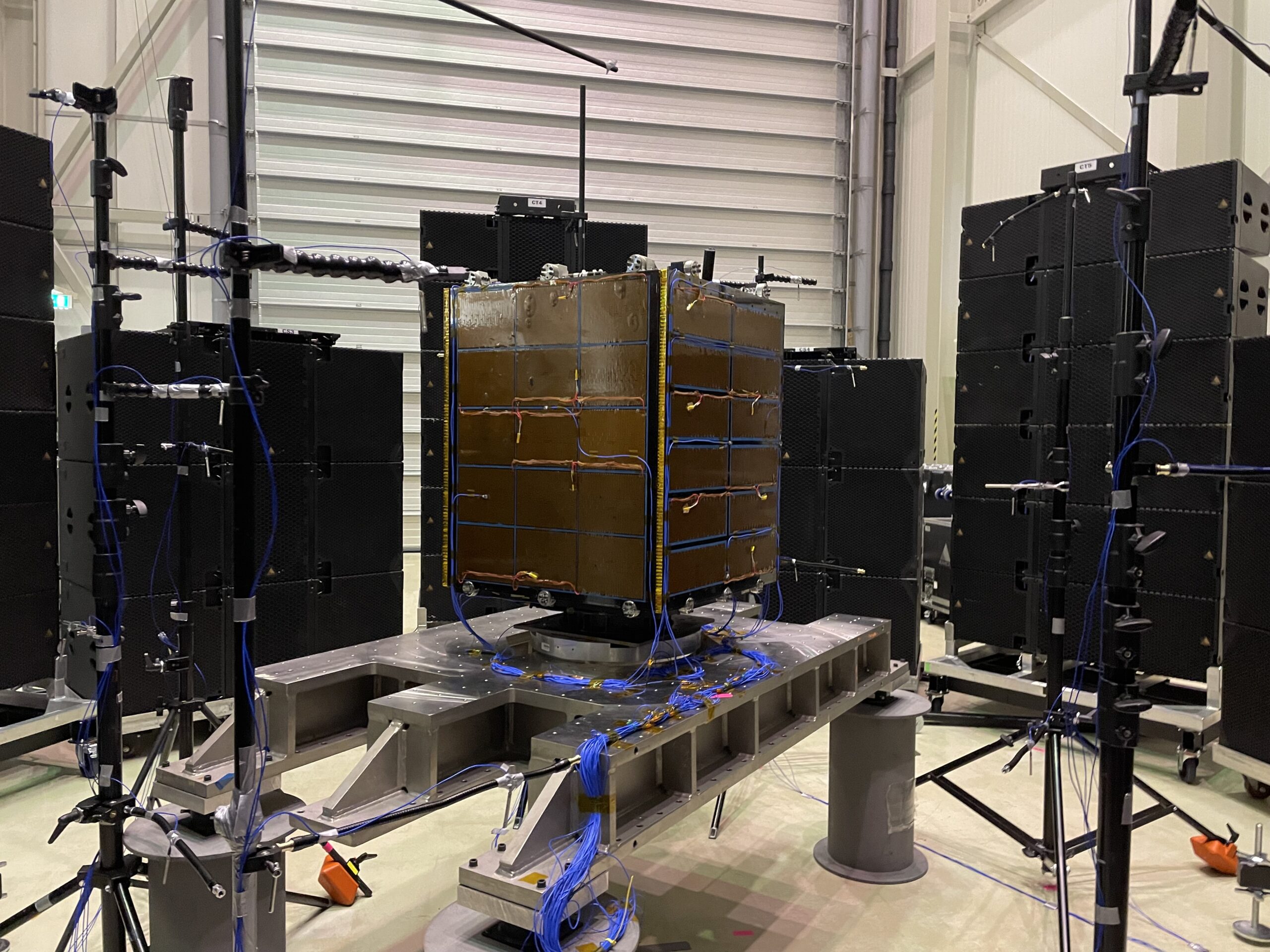 A blog post on spacecraft acoustic testing might be more interesting if I give you some background first. If you are thinking to build a spacecraft (whether it is to create a new telephone company, spy on your neighbor or help the world to improve weather forecast), you need to think also on how to get the spaceship up there! Nowadays, there is no shortage of choices for a launch vehicle: micro, mini, small or full-size satellites (or payload as they call them) have several carriers to reach space. From the media-champion Space-X company (with its Falcon 9), to Ariane work-horse, to the iconic Delta or the smaller Vega, you can find the launcher that fit your budget (and weight!)

Once you sign up with a launcher company, you’ll get a pack of documents, one of which is the launcher user manual. As with any user manual, this document tells you what to do with your product. For example, chapter 4 of the Ariane 5 User’s manual details: “The design and dimension data that shall be taken into account by any customer intending to launch a spacecraft compatible with the Ariane 5 launch vehicle”. A few pages later, you will find this: “The spacecraft authority shall demonstrate that the spacecraft structure and equipment are capable of withstanding the maximum expected launch vehicle ground and flight environments. The spacecraft compatibility must be proven by means of adequate tests.”

In other words, if you want to launch a satellite, you have to test it! And that’s where Siemens comes into the picture. Yes, our dynamic environmental testing solutions, are used to test satellites. Did you know that the majority of satellites produced in Europe, Japan, China, India, Russia, US are tested with Siemens Simcenter SCADAS hardware in conjunction with Testlab software?

The essentials of vibration and acoustic testing of spacecraft

Now, one of the tests to be done, as indicated by the table above, is acoustics. The noise level generated at launch is not only lethal to humans, but it can also damage the payload…or in other words, the whole space mission can be compromised. And nobody wants that! The Overall Sound Pressure Level (OASPL) reaches 146dB inside the fairing (where the spacecraft is tucked up to go to space). This vibration value can cause structural damage and jeopardize the functionality of instruments and subsystems. To give you an idea, 146dB is about 20 times louder than an operating jackhammer…with no ear protection! So, before the spacecraft launch, the large and flexible components of the launch vehicle (for example reflectors, or solar panels) as well as the Proto-Flight (PF) model, are tested and exposed to high-intensity noise. In this way, engineers can assess their response and ensure they will survive the launch.

On one hand, these ‘payload vibro-acoustic tests’, as defined in the NASA Handbook, have been historically carried out in unique reverberant acoustic test facilities. While on the other hand, during the last decade there is a growing interest, with some technological leaps, to develop alternative satellite test equipment and methods. Let me tell you a little bit about the known-accepted-standard way and something about the newer testing method.

The conventional method of ‘payload vibro-acoustic tests’, sometimes referred to as RFAT – Reverberant Field Acoustic Test, requires large reverberant acoustic chambers (see the photo above showing the room at ESA-ESTEC in Noordwijk-Netherlands). As the satellites have been launched for decades using this type of tests, this methodology is validated, accepted, and part of the industry standards or handbooks.

Applying this spacecraft vibration testing method, Simcenter Testlab Acoustic Control makes sure that the noise generated in the chamber matches the profile imposed by the launcher user’s manual. The noise is generated by a set of acoustic modulators and ‘horns’, which together produce high-intensity pressure waves. These chambers have usually more than one modulator/horn. (NASA Plumbrook which is the biggest in the world, has 36 of them!!). Most of the rooms use nitrogen-filled room, whilst some used dried oxygen. The final goal is to keep the air as ‘clean’ as possible and minimize sound absorption.

As effective as RFAN tests can be, the sheer size of the building (fitting reverberant chambers of 1000cubic meters with 1 m thick walls), the complexity of the gas/depuration system, the overall running cost, and their geographical spread, make this choice to the spacecraft owner very onerous.

For a purely business reason, companies in US started to ask the question: “What if we use loudspeakers to make that much noise?” That question was asked almost two decades ago. It took numerous series of tests and many broken speakers to reach today’s state-of-the-art satellite vibration test method. Based on Multi-Input-Multi-Output (MIMO) narrow-band control algorithms, SimecenterTestlab offers today the possibility to generate the required noise level (146dB) and field uniformity for spacecraft acoustic testing.  Of course, once an adequate set of speakers and amplifiers is provided. Such a setup requires less cost compared to the investment and running cost of a reverberant chamber. What’s more, the main added value of the DFAN method is that the all sound system can be moved and transported to the manufacturing site. This is a great benefit since the payload doesn’t have to be shipped to the test facility. So, the economic benefit for spacecraft manufacturers is clear: no need to build very expensive test facilities, no need of moving payload and teams of engineers to a remote test center, and increasingly efficient testing technology… However, space agencies and launch vehicle producers are still trying to create the necessary guidelines for the industry. As of today, NASA Handbook 7010 is the only document that provides some guidelines.

As this innovative direct field acoustic excitation technology advances also in the control algorithms included in the Simcenter Testlab software, this attracted the main attention of satellite OEMs and agencies through a number of research activities, validation tests, and scientific publications. The European Space Agency (ESA) is now fully aware of the full potential of this method. Meanwhile, many space subsystems and full satellites have already been successfully qualified with this state-of-the-art solution.

Of course, I don’t need to convince you that since we’re dealing with satellites, we’re dealing with very expensive systems with unique payloads. The last thing we want is for something to go wrong during the qualifying tests. Digital twins can make a huge contribution by supporting test campaigns before the actual physical test takes place. That is why we have built into Simcenter 3D the possibility to design and optimize the setup for a more efficient and safer test. Further research is also underway to reuse the same digital twin models to estimate the acoustic and structural responses online, including in locations where no physical sensors are placed. The idea is to extend the limited data obtained from the sensors during the test with data from virtual channels to enable full-field monitoring. More on this will certainly be explained in a future blog post.

To conclude, when building your next (or first) satellite, you will have to verify and qualify it also to acoustic excitation. Whether you opt for a standard reverberant chamber test facility or you proceed with a more versatile and innovative technique, being a reliable partner in many projects applying both methods, you can count on our expertise. Learn more about dynamic environmental testing here.

10 insights from rocket CFD for a mind-blowing moonshot July 29, 2021 This is your guide to a successful moonshot project - with 10 insights that only rocket CFD (Computational Fluid Dynamics)…
Why link automotive comfort and satellite micro-vibrations? January 20, 2022 Learn what automotive comfort has to do with satellites and discover innovative testing tools to mitigate satellite micro-vibrations.
Industry 5.0 already??? January 19, 2022 We spoke to KU Leuven industrial research manager Dr. Bert Pluymers to see what this all means for the future…

This article first appeared on the Siemens Digital Industries Software blog at https://blogs.sw.siemens.com/simcenter/spacecraft-acoustic-testing-getting-the-spacecraft-safe-and-sound-into-space/