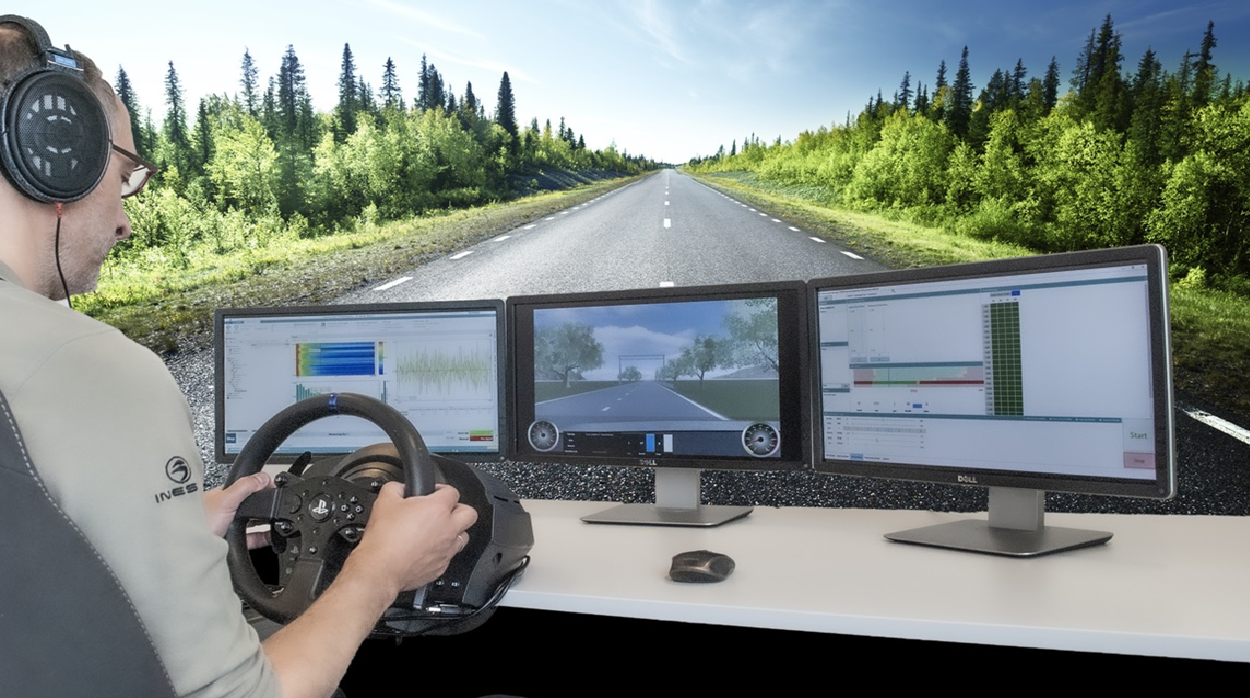 Like anyone, I regularly get the question in private life: “What do you do for a job?” The easiest answer I give to non-technical people in my experience: “I am working with engineers across the globe to help them design cars to sound great.” If there is a young kid with them, I may add: “To give those vehicles a good ‘vroom’ sound.” Just recently, it crossed my mind: “Would in 10 years from now, a kid not look surprised if I say ‘vroom’? And what should I be saying by then?”

Today’s transformation towards electric vehicles completely changes the sound of those. The gone internal combustion engine for sure removes the typical “vroom” that kids relate a car sound to.  Many prominent questions for car developers have come:

The answers to those questions are all given by our Vehicle NVH simulator. It allows to create a full virtual version, the digital twin, of a vehicle under development and listen and/or feel its behavior long before it actually exists for real. On top of that, modifications to this digital twin can be applied and evaluated easily, which increases the chances of designing the right first time and reducing the risks of expensive physical prototype cycles.

How is this done?  It all starts with the creation of the virtual vehicle to run on the simulator.

All good things consist of two …

The vehicle NVH simulator is build up of two models:

In-vehicle development, target setting followed by target cascading to component level is a very well-known methodology to control overall performance. Many of us know the classical V-cycle development process that supports this: different NVH target curves, such as orders or spectral noise contributions for subsystems and components, are set early as design criteria. Although these curves may work very well to control overall NVH levels, they may not be very useful to control the final sound perception of the vehicle. In other words: How my vehicle will spark a certain emotion to the driver is not captured in this process.

The vehicle sound simulator translates curves into subjective NVH evaluation; it uses those different target curves to define the core NVH model, to generate actual vehicle sounds while driving a virtual vehicle. As such, it allows engineers to evaluate the subjective NVH performance of the vehicle under development.  It also easily allows evaluating high-level alternatives. For example, by balancing the levels between orders or by amplifying frequencies in wind noise, …  While the accuracy of data improves throughout development, regular re-assessment of the sound perception is enabled anytime.  In summary, at any stage throughout vehicle development, you can subjectively evaluate the NVH aspects of the vehicle using this approach.

Being able to evaluate the subjective NVH throughout development is mostly not enough. It is also required to evaluate the impact of changes. For example, how meaningful design changes can impact or improve sound perception. I use the word “meaningful” here on purpose. You can make many different conceptual changes to the NVH model that is used on the simulator, such as re-balancing of levels of orders, amplification of road noise levels, filtering of frequency bands, … Do those changes, however, give concrete answers on how to actually implement them on the vehicle? The answer is: No, as they have limited physical meaning and engineering value.

The next level can be using transfer path analysis (TPA) to build up the NVH model on the vehicle sound simulator. Instead of using overall motor orders in the model, you can further translate those orders into separate path contributions.

Having all the different paths modeled on the vehicle sound simulator sounds great, doesn’t it?
It is often being assumed or stated that this level of detail allows assessing the impact of meaningful changes, where one path is modified in the TPA model, followed by a re-evaluation of the vehicle sound. A typical example is how to make a modification to one of the mounts of the powertrain or to apply a frequency filter on one path only. However, very often, the development teams fail to realize that this is physically incorrect and can lead to quite wrong conclusions.

The reason is that it is simply incorrect to assume that a modification can be made on one path only. A modification to one path will change the other paths by definition, whether we like it or not. Assume the simple example: if I modify the stiffness of one of the powertrain mounts, the same energy of the powertrain will redistribute over all mounts. And such, and as such it will impact other mounts excitement.. So saying: “I can just make a modification to one path without making any corrections to the other paths” is simply incorrect. So traditional TPA still does not allow me to assess the impact of meaningful modifications.

Therefore we need something else than traditional TPA…
The only way going forward is to use a model that is build up from mechanical component models that are characterized each independently but then can still smartly be virtually assembled together. This is exactly what a component-based TPA model does. It is essential to build up the NVH model on the simulator. Moreover, it is the only way to learn how a specific design change on one component of the vehicle will impact the NVH perception of the vehicle. Component-based TPA allows modifications on component levels and will automatically lead to the correct assessment of the impact on the overall NVH performance of the vehicle.

Check out this white paper to learn all about the concept (theory and practice) behind component-based TPA.

Listening to the sound of a virtual vehicle assembly

The component-based TPA approach to create vehicle NVH models also allows taking the next step in the whole construction of the vehicle NVH model: the ability to make a complete virtual assembly of your vehicle and evaluate its sound!

Within the Simcenter testing portfolio, experts have the capability to synthesize components through test-based models using the component-based TPA approach.  As in practice, an electric vehicle is a build-up from many subsystems and components that contribute to overall NVH, Simcenter designed a powerful process implemented with the new virtual prototype assembly software.  Experts can publish their components and share them through component libraries. And as a next step, they can easily be assembled into a fully virtual vehicle, that can on its turn is prepared as the basis of the NVH model to be driven on the sound simulator for subjective sound evaluation. Since the actual model behind is built up from meaningful independent components, it becomes possible to make modifications on one component separately while still properly considering how this will impact the overall assembled virtual vehicle. As such, the teams can create components using test-based approaches, but in many cases, alternatively, they can create models through simulation too. Imagine, for instance, simulating a vehicle body with added trim material to evaluate the impact on the vehicle sound perception on the vehicle sound simulator.

And there is more …

Remember one of the questions I raised in the beginning: How should the vehicle sound and feel as a reaction to rapid acceleration? How does the acceleration sound can reflect the brands’ value? Besides the NVH model, the vehicle performance model is required to evaluate sound perception properly. As a vehicle becomes more and more ‘a computer on wheels’, it is important to include also the controls into this model. This will enable you to evaluate how changes in control can impact NVH perception for the driver. To learn how all this can be done, I refer to the blog post: “MBST: the marriage of Test and Simulation” by my colleague, Ricardo.
More and more active sound design becomes the way to give the vehicle sound that additional final touch and create a unique driving experience. A lot to mention on this specific topic itself. With this solution, you can tune the created models, both the vehicle sound simulator instead of the final prototype, in a very attractive way. To learn more about how we can support active sound design in general, I refer to the blog post “All you need to know about vehicle active sound” by my colleague Marta.
Last but not least, to learn a lot more about our vehicle NVH simulator, about all the models and active sound design, I’d like to invite you to the on-demand webinar.

To come back to how I started: how will kids in the future mimic the sound of a car? Maybe the answer is simple and can be found in this comparison.

The founding father of Siemens, Werner Von Siemens, invented the electric train a long time ago, and he may have asked the same question: However, ask a kid to mimic the sound of the train: Choo-Choo … 😊

MBST: the marriage of Test and Simulation – part 3 March 24, 2021 Learn more about collaboration between test and simulation throughout development cycles illustrated with a vehicle simulator example.
Chengdu: driver experience testing center for superior ride… September 15, 2020 How the Chengdu driver experience lab helps to study possible discomfort related to a car’s driving behavior and NVH comfort…
Why 'battery vibration test' is the name of the game July 29, 2021 Learn how to set battery vibration test to ensure proper durability testing and secure integration into the vehicle.
This article first appeared on the Siemens Digital Industries Software blog at https://blogs.sw.siemens.com/simcenter/why-a-vehicle-sound-simulator-can-help-you-define-what-should-come-after-vroom/