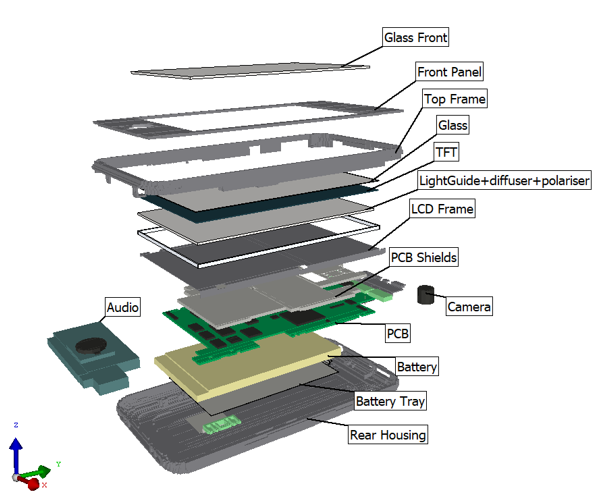 Handheld, portable, battery powered electronics, such as a smartphone, have a thermal design constraint that limits the maximum ‘touchable’ temperature on the surface of the device. What this touch temperature is, and how it is a function of the material properties of the object being touched, is covered by the preceding blogs in this series (ref. part 1 and 1a)

In this part 2 on touch temperature, we’ll look into the uniformity of the surface temperature distribution and how that can be used to simulate a maximum allowable power dissipation, using Simcenter Flotherm.

Far far slimmer than they were, but also with increasingly large screens, older models look more and more brick like in comparison nowadays. Ultra low profile packages, die thinning, advanced heat spreaders, improvements in battery technology, have all played into this trend.

Winding the clock back a few years, I’ve chosen a generic chunky smartphone model and built a Simcenter Flotherm model of it.

Although chunky from the outside, it’s remarkably complex and cluttered on the inside.

Simcenter Flotherm excels at such applications, producing a full conjugate heat transfer simulation in a matter of minutes.

The Coefficient of Thermal Spreading, a Figure of Merit

Pioneered by engineers from Qualcomm Technologies and Stanford University, the coefficient of thermal spreading (CTS) is a figure of merit that quantifies the non-uniformity of the distribution of surface temperature.

What’s So Good About a Uniform Surface Temperature?

Given that the surface temperature must not exceed a standardised value that would cause injury/discomfort, the ‘at limit’ design of the phone would see the entire surface of the phone operate at that temperature. From a heat loss perspective, this would also result in a corresponding maximum allowable power dissipation.

Easy enough to simulate the phone operating at a uniform maximum temperature, just set that as a boundary condition in Simcenter Flotherm. In this case a value of 45 degC is used:

The total heat loss from the phone under these conditions is 3.88W. As the only place that power can come from is from the electronics inside the phone, this is also the maximum possible power dissipation for all of the electronics!

As a figure of merit, the CTS can provide some guidance as to how good a design is, set some expectations as to whether there is scope to improve the design. The value of 0.764 is actually quite good, one of the advantages of older phones where, due to their thickness, there is more opportunity for the heat to spread prior to reaching the casing.

With the original phone model dissipating a total of only 1.57W, and a relatively high CTS to play with, there is scope to consider an increased power budget.

The Psychology of Hot Spots

I heard once at a conference (one of those bar conversations that you don’t plan for and are usually fascinating) that we (humans) tend to correlate a felt hot spot temperature with a specific assumed product failure. This compared to when the entire surface of the product is at the same temperature where we are less likely to assume something has gone wrong.

So, multiple reasons why a high CTS handheld product is desirable!

4 Myths about AI in CFD April 6, 2021 As Artificial Intelligence (AI) has become more ubiquitous in our everyday lives, so too has confusion about what it is…
Veering Off Course: Transportation Emissions & The Climate… January 11, 2022 Can significant parts of transport be decarbonized with existing technology? What are the barriers?
Keeping the lights on in a Climate Emergency December 1, 2021 In the midst of climate emergency 63% of our electricity still comes from burning carbon dioxide belching fossil fuels, that…

One thought about “Touch Temperature – Part 2: Coefficient of Thermal Spreading”

This article first appeared on the Siemens Digital Industries Software blog at https://blogs.sw.siemens.com/simcenter/touch-temperature-part-2-coefficient-of-thermal-spreading-electronics/