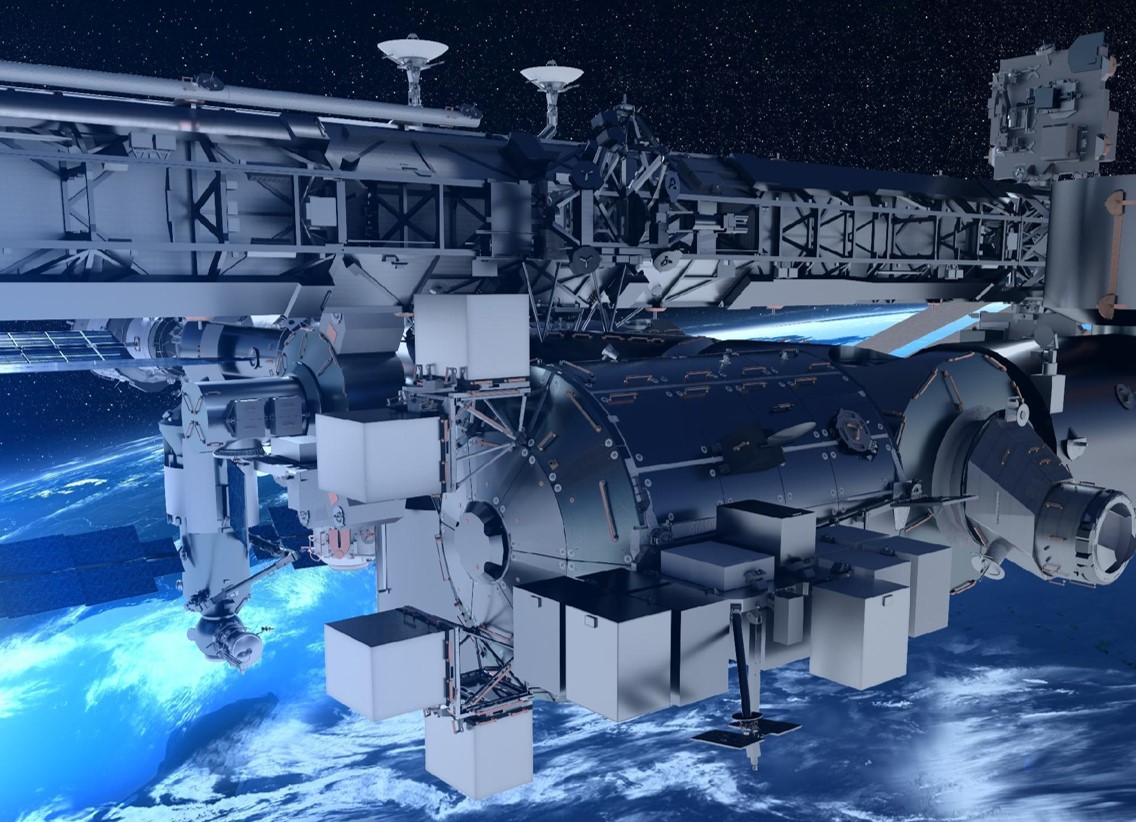 Courtesy Airbus Defense & Space: Illustration of the Bartolomeo platform designed to expand usage of the ISS.

All structures have natural frequencies, and it is often the most important feature of the structure, especially when it comes to dynamic response. Very often the vibrations must be investigated to quantify the structural response in some way, so that its implication on factors such as performance and fatigue can be evaluated.

Modal testing is a very useful and widely used technique to verify and investigate this behavior. It looks at the natural frequencies, mode shapes and damping of a structure and helps engineers understand how a design will respond to different dynamic loads.

In the space industry, this technique is also referred to as modal survey testing and is intended to calibrate and increase the accuracy of finite element (FE) structural dynamics model of spacecraft and space launchers. The validated models are important, among other things, for the prediction of the launcher vibrational characteristics, the aeroelastic stability and the dynamic environments to which payloads and on-board equipment are submitted to during the launch.

A modal survey test consists of injecting forces, using electrodynamic shakers or in some cases also a modal impact hammer at a number of carefully chosen inputs. In the case of shaker excitation, burst random excitation is usually used because it is fast and efficient. When higher excitation levels are required, or for the assessment of nonlinear characteristics, stepped sine techniques are used. The forces are measured during the test, along with the response accelerations at many locations throughout the structure. During this test, the spacecraft is mounted in well-known boundary conditions, clamped or free-free, or a combination thereof. During the excitation, FRFs are measured.

After the test, modal curve-fitting technology is applied to extract modal information: resonance frequencies, damping values and mode shapes. The test results are used for the purpose of validating the entire FE model and correlating frequencies, mode shapes and damping assumptions. The significant mode shapes and frequencies are those that are primary contributors to launcher/spacecraft interface loads and internal loads.

This process is illustrated schematically below. It shows how early FE models of the spacecraft can be used in Simcenter 3D Structural Dynamics to perform pre-test analysis and optimally design the test campaign. Simcenter Testlab and Simcenter SCADAS are then used to efficiently and reliably measure FRFs and accurately determine the best experimental modal model. Finally, the experimental results are further exploited to correlate the preliminary model with experimental results and to update the FE model to better reflect reality.

A good example of a program where a modal survey test was conducted is the Bartolomeo project from Airbus Defense & Space, carried out by Deutsches Zentrum für Luft- und Raumfahrt (DLR). Simcenter SCADAS Mobile hardware has been used as the critical measurement equipment for the modal survey test that was meant to update the FE simulation model of the Bartolomeo platform. This enabled the team to simulate and predict aspects that could only be done using simulation and analysis, such as how the platform would couple with the launcher.

Find out how Simcenter helped DLR complete a modal survey test of the Bartolomeo platform in less than 4 days!

Read the full article on DLR’s modal survey test
Want to stay up to date on news from Siemens Digital Industries Software? Click here to choose content that's right for you

Why link automotive comfort and satellite micro-vibrations? January 20, 2022 Learn what automotive comfort has to do with satellites and discover innovative testing tools to mitigate satellite micro-vibrations.
Towards another record year of space launches. September 23, 2022 Read about space launches and how to perform safe and efficient space qualification testing to optimize spacecraft testing. Read the…
Spacecraft acoustic testing: safe and sound into space September 19, 2022 Read about spacecraft acoustic testing, satellite testing, dynamic environmental testing, and other space-related physical tests here.

This article first appeared on the Siemens Digital Industries Software blog at https://blogs.sw.siemens.com/simcenter/modal-survey-testing-for-an-unscathed-journey-to-space/