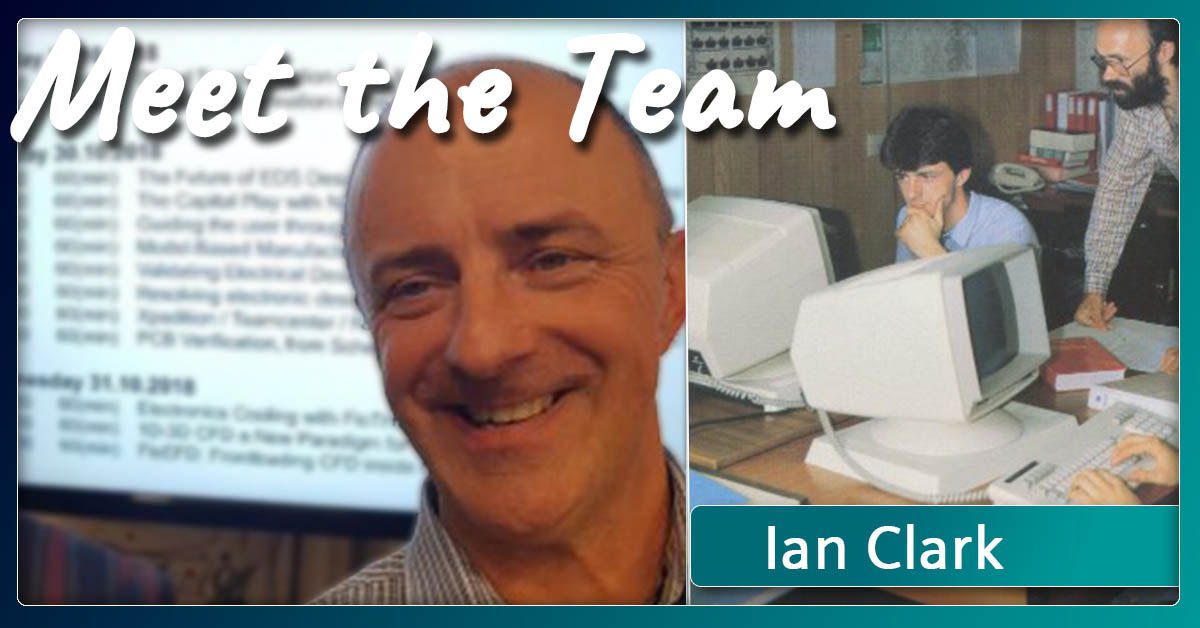 This installment of our Meet the Team series is a little different from others. Ian Clark has been Product Line Director for Simcenter Flotherm for the last 7 years. However, he will soon no longer be part of the team as he is off to enjoy a well-earned retirement. He has been such an important figure shaping thermal simulation products throughout his career. I just had to take the opportunity to catch up with him before he heads off into the sunset.

Read on to discover how his passion for the environment led him to a career in CFD. Find out how he’s seen the industry change since the early ‘80s and what he anticipates for the future. And now, how he’s going to keep himself busy during retirement.

What does it mean to be a Product Line Director?

It involves leading both the software engineering and product management teams and bringing them together to create a final product. A lot of my time is spent on business analysis – looking at trends and understanding what customers want. Before COVID I traveled a great deal in Europe and the Far East. In particular, meeting different organizations and understanding what they want from our software and how we can help them.

In tandem with the product management team, this information helps to drive the overall roadmap for the Simcenter Flotherm range of products. Once we’ve agreed on the direction, my job is in effect to work with the product managers and software engineers. We aim to get new releases to market as quickly and as smoothly as possible.

What drew you to a career in CFD?

It wasn’t something I set out to study initially. I was very close to my granddad, and he gave me a love of the environment and the natural world. This led me to undertake a geography degree at the University of Edinburgh. In my final year I completed a module on climatology. I was introduced to climate modeling, and it absolutely blew my mind that you could use a computer to simulate something as complex as weather phenomena. So that was my first experience working with CFD. I was so excited by it that I went on to do an MSc in Meteorology. Following that, a Ph.D. where I developed my own CFD code for numerical modeling of sea breezes in the Plymouth region.

After completing my Ph.D. I could have stayed in academia but I followed an opportunity at CHAM. CHAM is a company founded by Professor Brian Spalding. He was at the leading edge academically with CFD and had started to develop solutions in a commercial context.   I wanted to explore CFD further as a career and working under one of its leading advocates seemed like the best way to do that.

It really was an exciting time – this was back in the mid-80s in the early days of commercial CFD –  and CHAM was leading the way. I worked on a range of projects initially, including modeling of asbestos dispersal from large-scale fires and simulating the formation of nitrogen oxides from industrial burners.

How did you move from environmental modelling to electronic thermal analysis?

Whilst working with CHAM in Huntsville, Alabama we did a lot of consultancy work for NASA at the time but had also started commercial discussions with IBM. This was my first real exposure to electronics thermal design as we were using the software to simulate racks of printed circuit boards. It was very clear at that time that thermal simulation was going to be of growing interest in electronics design. So when I had the chance to join Flomerics in 1991 I didn’t hesitate.

Flomerics was founded in the late 1980s by Dr. David Tatchell and Harvey Rosten along with some of my previous colleagues at CHAM. Together, they deliberately decided to move from general-purpose CFD simulation to focus on specific applications, of which electronics cooling became the most critical.   This was when I first worked with Simcenter Flotherm. Almost everything I’ve done since then has been around the development and application of electronics cooling solutions and products.

How has your role changed over the years?

My first role at Flomerics was customer services manager in the USA. I also opened up the first office for Flomerics in Silicon Valley.   A few years later I made the decision to return to the UK and found myself taking on the product management as well as the customer services role.  It became clear very quickly that this was really two jobs. It was far too much for one person to handle, so the company decided to create separate roles. That was when I became the first dedicated product manager for Simcenter Flotherm.   This meant I could focus all my energy on software releases and making sure we evolved our solutions to meet our customers’ needs.   This was also at a crucial time when Simcenter Flotherm was moving from its 1st generation to a 2nd generation with a new UI design and underlying architecture.

When we were acquired by Mentor Graphics in 2008 it was well-received by my colleagues and I. This was because they were an electronics design automation company with a great pedigree and had more mature software development processes. This helped to expand my role as a product manager. I was delighted to take on the Product Line Director position when this became available, as it was the perfect next career step for me.   By the time we became part of Siemens in 2017 I had brought a number of products to market, including Simcenter Flotherm XT, and I have continued to use my experience in managing a team of product managers and software engineers, giving them the support to develop their careers whilst building great new solutions.

What’s been your favourite part of the job?

Without a doubt, the customer interaction. I love giving presentations and running Q&A sessions. Talking to customers about all their design challenges and then working out how we can help them has always been so rewarding for me. I used to do a lot of training too which was really enjoyable. It was just another way to interact with customers and give them solutions to their problems.

What advice would you give to anyone starting out in the industry?

Try to accept change. When I started out, I didn’t expect to spend most of my career in electronic thermal analysis, but it’s impossible to know exactly what the future holds, especially in an industry like this. It’s important to be aware of new developments that are coming and embrace them when they do.

And don’t assume that you must move from company to company to take the next step. The grass isn’t always greener. Particularly in a big organization like Siemens there’s an enormous range of opportunities that can be just as valuable for career progression as gaining experience at a new company.

You’ve been working in the industry since the early days of CFD. What are the major changes you’ve seen in how it’s used?

At CHAM we had a product called PHOENICS, which was the very first commercial CFD code. It was a general-purpose code designed to solve a range of industrial and environmental applications. The trend in the 80s was for companies to create general-purpose codes which customers could adapt for all types of use.

Products like Simcenter Flotherm, however, were a shift away from this approach. Simcenter Flotherm is a CFD based thermal simulation solution for a specific vertical application: electronics cooling. This meant that we could focus purely on what it takes to model electronic systems. We didn’t have to concern ourselves with things that weren’t relevant in a CFD context. eg. multiphase or hypersonic flow.

This has allowed electronics manufacturers to completely change the way they develop products. Previously they would have built prototypes. Then they would have used test and measure approaches to look at thermal performance and reliability.  Prototyping can be a long and expensive process and provides limited information.

What do you think will be the next big development in CFD for electronics?

I think combining artificial intelligence with CFD has the potential to offer significant improvements for users of the software to make the right decisions.   Whilst we make Simcenter Flotherm products as simple as possible to use, there are still a lot of user decisions that must be made and can result in uncertainty and errors in simulations.   As AI approaches improve, we can take away a lot of these uncertainties. This will eliminate mistakes and get results faster and more reliably.  This interesting blog issued last year about the role of AI in a CFD context gives a very good summary of the topic: 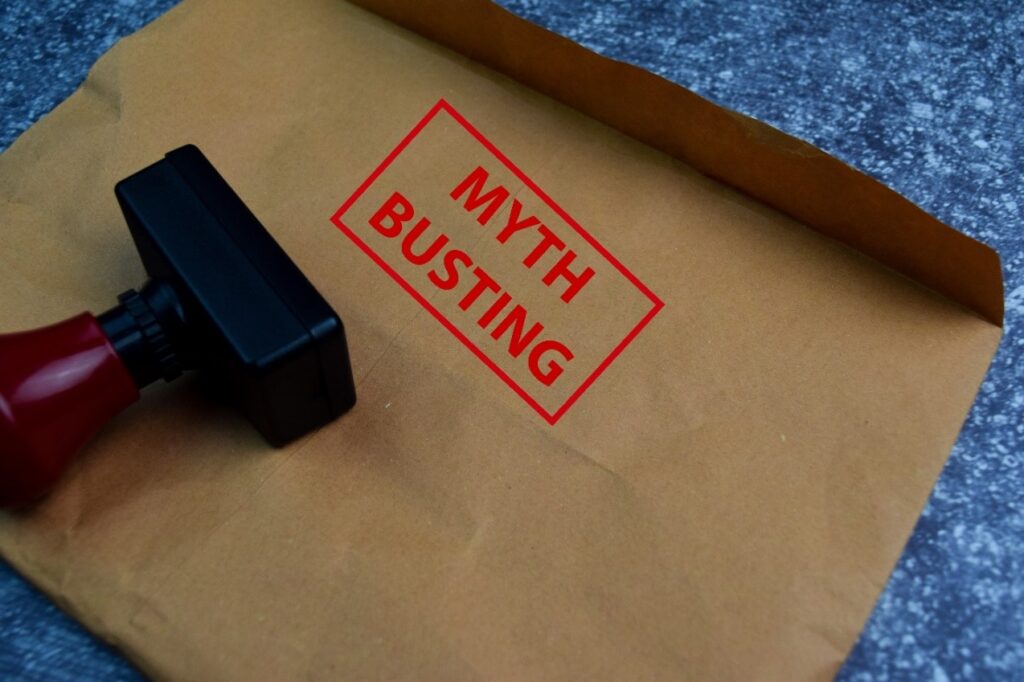 4 Myths about AI in CFD

In this blog, we discuss the role of AI in CFD. We also clear up some common myths around AI in CFD and explore real-world examples of its use

Now you’re at the end of your career, what do you see as your legacy?

It has to be the team of product managers and software engineers I’ve built up and worked with over the last decade. There are products that I’ve been involved with from start to finish. Such as Simcenter Flotherm XT, which I’m incredibly proud of. But I know that the team of people here will continue to make more of these over the coming years.   I’ve always given people the room to grow and develop within their roles and I think that’s been crucial to the success of our products.   Now that I’m retiring, I feel Simcenter Flotherm is in very, very good hands for the future. That’s the most important thing for me.

Finally, what are your plans for retirement?

I’m a keen cyclist so I’ll be spending lots of time out on my bike. And back on the golf course, too. I play off an 18 handicap now and my target is to get that down to single figures.

I’d also like to revisit amateur dramatics and operatics that I was involved with when I was younger. I sang tenor in Fiddler on the Roof in my forties. I might also have another go at pantomime too. I’ve played the panto dame a few times before, but I much prefer being the bad guy and having all the kids booing and hissing at me!

Another thing I’m excited about is one of my leaving gifts – a voucher for an online creative writing course. One of my recent discoveries is Ellison Wonderland, which is a collection of short speculative fiction stories by Harlan Ellison. I’m not saying I can write like him, but I’d love to have a go at some short stories in that genre.

Sounds like you’re going to have a pretty busy retirement, Ian! I’m sure it will all be great fun and I imagine a mind like yours can come up with some truly unique stories! Thank you so much for taking the time to talk to me and I wish you all the very best for the future.

This article first appeared on the Siemens Digital Industries Software blog at https://blogs.sw.siemens.com/simcenter/meet-the-team-ian-clark/