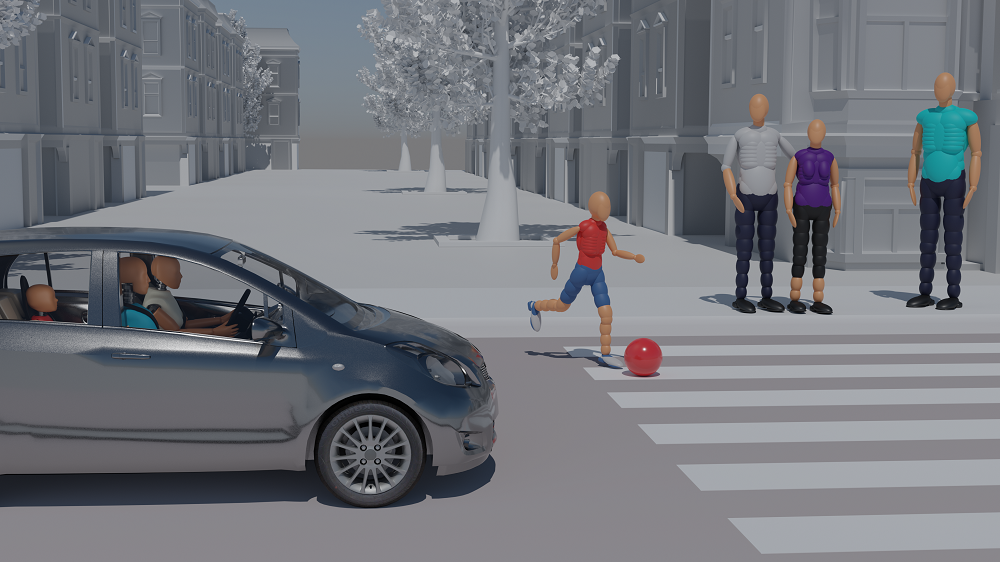 Siemens Simcenter Madymo has been awarded the ‘Crash Test Innovation of the Year’ for 2021 by the Automotive Testing Technology International (ATTI) magazine.

Automotive Testing Technology International was launched in 1998 as a quarterly review of the very latest research and developments within the area of automotive test and evaluation. With a worldwide circulation of over 15,000, ATTI has become the leading and most respected magazine covering breaking stories in the fields of vehicle reliability, durability, safety, quality, NVH, and dynamics testing and evaluation. They have been rewarding the efforts made in areas relevant to automotive development since 2006.

Earning such recognition from experts in the field of automotive testing and evaluation means a lot for the entire Madymo team! Our teams work relentlessly to develop state of the art functionality and models in Simcenter to help engineers develop products that can protect and save lives. The award is confirmation of our strategy towards the development of virtual testing methods, and a stellar encouragement to continue our product roadmap in this way.

In recent releases, Siemens introduced a series of developments that earned the software this award. This blog aims to look back at some of these developments to offer an overview of the development work being completed by the company.

The nature of scientific work occurring within the organization is diverse and not just limited to software development. A sound understanding of the requirements and features of the Madymo Solver fuels the development of human,  dummy and safety applications. These validated models and applications are critical components of the product.  The human and dummy models  provided with the software are essential assets needed  to study the kinematics and dynamics of occupant motion in safety critical events. A framework for quantifying risk of injury is also available in the software.

The team deals with multiple concepts ranging from numerical simulations to biomechanics for human body and dummy modelling. The fundamentals of these concepts are continuously revisited and quesitoned because a solid scientific foundation, coupled with smart software development, is key in   delivering value to engineering teams around the world.

Safety-critical events in a car crash last no longer than a few hundredths of a second. Simulating such events requires accurately capturing physical phenomena that occur at even smaller time scales than the already miniscule duration of the simulation. The challenge is to develop a solver strategy that does not significantly compromise accuracy while simultaneously offering fast run times. Finite element analysis (FEA) enables the modelling of more minute details of any simulation model, offering higher fidelity simulations. This high-detail modelling, however, comes at the expense of longer simulation run times. MBD, which is the primary modelling approach used in Madymo, overcomes the problem of high run times by finely balancing the modelling of minute details during the simulation.

In various interactions, our customers have expressed that low simulation run times, without severe reductions to accuracy, are a key feature in safety simulation software. Shorter run times allow engineers to evaluate more safety system designs, selecting the best from a broader array of options. Faster run times also facilitate extensive parametric or optimization studies, which speeds up the safety system design process for the customer. The faster Madymo can run simulations, while preserving sufficient accuracy, the more value it can deliver to the customer. Thus, the Siemens team has consistently improved on solver run-times with each new release.

Notably, the 7.8 release showed improvements in run times of up to 28% relative to the previous version, according to conservative in-house measurements (figure 1). In practice, many customers reported improvements of 40% or even faster. Yet, the process of improvement has not stopped. New functionality, called RESTART, has been implemented to further improve simulation run times.

The RESTART functionality in Simcenter Madymo is a development that further improves upon the run times of software applications and vastly reduces processes at customer sites. The functionality enables users to start multiple simulations of a Madymo application from an instant of interest, without having to create multiple copies and entire simulation runs of the application itself.

Consider a situation where a car driver brakes late in response to an obstacle that appears suddenly. The event in which the vehicle sharply decelerates during its collision course with the obstacle is considered as the pre-crash phase, while the beginning of the crash phase is marked by the moment that contact occurs between the car and the obstacle. A safety system engineer creates a simulation model of this event to analyze the performance of multiple seat belt designs during the crash event.

Conventionally, the designer would have to define multiple simulations with the various belt designs of interest. Each simulation would run the same pre-crash phase and the same crash scenario, but with different belt parameters. The simulation of pre-crash events generally takes longer, leading to considerably longer times and higher disk-space costs incurred by the simulations. RESTART helps avoid such costs because the entire simulation (i.e. both pre-crash and crash phases) runs only once. Then, safety engineers can enter alternate belt parameters and start subsequent simulations at the beginning of the crash phase, without re-running the pre-crash phase (figure 2). RESTART functionality has demonstrated 67-90% time savings compared to a complete simulation run, offering teams even faster overall runtimes (figure 3).

Human body modelling has seen several improvements with the Madymo Active Human Model (AHM). Active human modelling is the next step from passive human and dummy modelling. As the name suggests, the AHM can maintain its posture during vehicle motion, just like a real human being (figure 4). The insights gained from the analysis of pre-crash events have been invaluable during model development. These insights have offered a deeper understanding of the mechanics of posture maintenance, which is then implemented into the AHM using concepts of control engineering. Each upgrade to the model is aimed at improving the current state of model validation and user-friendliness. Currently, the AHM represents a 50th percentile human male, and the creation of a female AHM is on the development roadmap. To be able to develop the female counterpart of the AHM, volunteer tests have been conducted to understand the biomechanics of female occupant motion. This understanding will facilitate the modelling and validation.

In addition to the already existing family of Hybrid III dummies and the Q-child dummy models, a family of pedestrian human models has been developed and  validated according to the TB024 protocol. This family of models constitutes a 95th percentile male, a 5th percentile female, a 50th percentile male and a six-year-old child (figure 5). These models are used in the Euro NCAP protocols and can be used in a variety of assessments relevant to the safety of vulnerable road users.

The variability of human sizes also poses a challenge to safety-related simulations, and a good system needs to cater to all sizes and populations of people. Keeping this need in mind, Simcenter Madymo software allows for human model scaling to various heights, weights, and relative sizes. This is an important development in the progress towards improving the global state of automotive safety.

With the release of Simcenter Madymo 2021.1, all Technomatix Jack’s databases were integrated into Simcenter Madymo’s scaling functionality.  Anthropometrically accurate human models can be scaled in a easy, user-friendly way to sizes which are representative of the various world populations (figure 6).

The Framework for Occupant Restraint Testing and Evaluation (FORTE)

Simcenter Madymo offers its users an application specifically for evaluating integrated safety systems. This application is called FORTE. This application provides a user-friendly simulation framework that is versatile, modular, and quick to set up. FORTE allows novice safety system engineers to simulate a variety of safety-related scenarios without having to create simulation models from scratch (figure 7). The application is segmented into several subsystems, parameterized and coupled with fast run times, and is suited for large-scale DOEs and optimization studies to arrive at suitable safety system designs.

Presently, the application is used for safety system assessments with the AHM, but is being expanded with a wider variety of human and dummy models, covering gender, relative size, and age. This value addition, which is in the long-term roadmap, will make FORTE applicable to design systems well suited for multiple populations.

Moving forward, it will be critical to become more integrated with the other domains of automotive engineering, including design and simulation processes. Simcenter Madymo is integrating with Simcenter 3D, offering expanded capability and enhanced user-friendliness for automotive engineering teams. The integration will also support the continued improvement of Madymo.  Siemens has become a powerhouse of knowledge in the field of simulations over many decades, and access to this knowledge will facilitate further enhancements to the product within the Simcenter 3D environment, with the aim being to ease modelling, running and post-processing of safety simulations.

Madymo models and applications have the potential for use in large-scale DOEs and optimization studies, as mentioned earlier. This potential is realized with the integration of Simcenter Madymo with Simcenter HEEDS. Smartly navigating through an extensive design space with nonlinear constraints is a task tailor-made for Simcenter HEEDS, and this combination of Madymo and HEEDS, along with all other developments in sight, promises to be a safety simulation powerhouse.

Other Developments In The Horizon

Upcoming enhancements to the solver include improved modelling capability of compressible fluid (i.e. gasses) flows. This modelling will be invaluable in creating detailed models of airbags. Furthermore, coupling with partner codes in an efficient and robust manner is a value addition that the team will make available to its customers.

With regards to human body modelling, work has began to improve the quantification of the risk of injury to vehicle occupants and vulnerable road users. The company also plans to provide human models that are validated under numerous loading scenarios. Far Side Crash events is one such scenario in which the team will validate its human and dummy models.

Enhancements to the software’s pre- and post-processing capabilities is also under development. Improvements in modelling interaction between FE and MB subsystems in a simulation is one such enhancement. Additionally, the addition of a totally new protocol rating tool will better facilitate analysis during post-processing.

The company’s new development scope and plans are far-reaching, endless and remain truly innovational.  The ATTI magazine award is hopefully one of several milestones in the development journey of Simcenter Madymo and its applications.

4 Myths about AI in CFD April 6, 2021 As Artificial Intelligence (AI) has become more ubiquitous in our everyday lives, so too has confusion about what it is…
What's New in Simcenter Mechanical simulation - 2212 Release January 24, 2023 Predict mechanical performance of your detailed product designs across multiple physics disciplines. Learn what's new in the Simcenter Mechanical 2212…
Heavy equipment durability testing: Living on the edge! October 28, 2021 Imagine a scenario such that you want to measure real-life loads impacting the durability lifetime of an agricultural machinery. You’re…
This article first appeared on the Siemens Digital Industries Software blog at https://blogs.sw.siemens.com/simcenter/https-blogs-sw-siemens-com-simcenter-madymo-automotive-test-innovation-receives-industry-recognition/