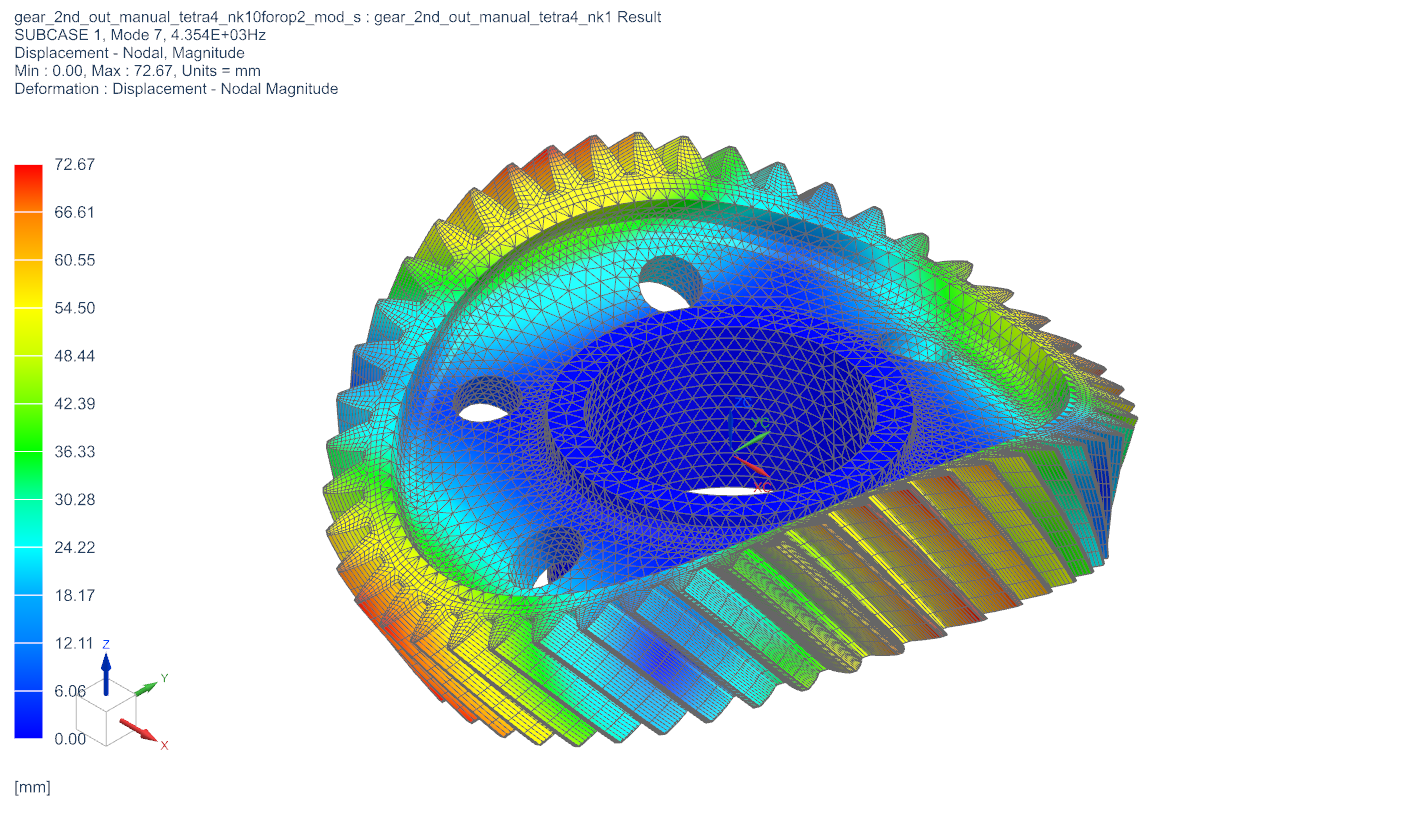 What is the primary source of vibration in a gearbox? The short answer is your gear meshing! Since gear meshing is essential, transmission CAE tools need to have accurate methods to predict gear meshing as a vibration source. A fundamental requirement is that the methods used capture stiffness variation during meshing cycles for a given load condition. However, as loading conditions change during operating conditions, it is essential to consider the changing loads and their effects on the gearbox structural compliance and the bearings. Moreover, other aspects such as gear microgeometry, tooth coupling effects, and gear blank design also play a crucial role. For more information on this subject, consult our previous blog post for a discussion on some of these methods.

Where does the noise come from?

Are Electric Vehicles (EV) truly quiet? Decibels, like all measures, are relative and relative to an Internal Combustion Engine (ICE) an EV is quiet. However, volume is not the only criterion that can make a noise undesirable. The common perception of tonal noises, such as gear whine, is that they are very annoying. An ICE ordinally drowns out these sounds, but in an EV the gear whine can be heard. The source of gear whine originates mainly from the variation of stiffness during the meshing cycle of the gear train.

Dynamic simulations evaluate those vibrations generated from the differences in stiffnesses and find solutions with optimal acoustic behavior. Detailed simulation models of both the source of the vibration and the transfer paths are important to accurately represent the transmission’s acoustic characteristics. To optimize gear whine performance, many leaders in the industry have focused on changing the gear blank design. Changing the gear blank can result in gears with reduced mass, which influences the overall dynamic response through their eigenfrequencies.

Simcenter 3D can help engineers address tooth coupling effects and other critical phenomena.  The advanced dynamic finite element [FE] preprocessor method, part of the Simcenter 3D Motion Drivetrain product module, is a fast computational tool that can model a dynamically evolving flexibility effect. This tool is essential for modeling a simple helical cylindrical gear pair with a reduced mass gear blank design. It is essential because the flexibility of the gear can influence the contact pattern and the dynamic response of the transmission.

As shown in Figure 1, in extreme cases, the gear will deform due to the forces generated, resulting in different contact patterns and NVH [noise, vibration, and harshness] performance. Only with a simulation tool such as Simcenter 3D can you fine-tune the gears, to have a minimum mass, and optimized NVH performance. You can also plot typical NVH attributes such as bearing forces, transmission error and acoustic radiated power to determine the influence of the gear natural frequencies on the system response. This allows the engineer to optimize gear custom blank designs for NVH performance without the need for physical prototyping. Figure 2 shows, an order cut for the second gear harmonic bearing force as an example. This plot shows a clear resonance at an RPM corresponding to the first eigenmode of that gear.

We established that the effect of flexibility on the source of vibration is present, important, and can be adequately simulated. We presented this with the gear being the source of vibration, but what if the gears are not the only source of vibration? What if the transfer path plays a role? Planetary gear systems are used in a wide range of applications, from automotive automatic transmissions to gigantic reduction drives in wind turbines. In some cases, the flexibility of the ring gear has a significant influence on both teeth contact and the forces transmitted to the surrounding structures.

Moreover, local reinforcements of housing structures close to thin ring gears may impact the vibration signal as planets pass by. To ensure these factors are catered for in the final design, a modeling approach is required to consider the housing and the ring gear as flexible components. If you would like to know more, together with Schaeffler, Siemens Industry Software presented a paper dedicated to this topic at the ATK CWD conference [2].

The example below demonstrates the effect of the load path and how the planets passing by can influence the reaction forces at a housing mounting point. As demonstrated by the National Renewable Energy Lab wind turbine gearbox [1], the modulation in the reaction force due to the planet passing frequency can only be detected if you consider a method that includes the ring gear dynamic flexibility.

Another exciting result is the gearbox deformation during operating conditions. The video below shows the gearbox deformation highly scaled. This scaling allows us to see the deformation pattern clearly and the effect of the planet ring interactions and contact forces on ring gear deformation. The triangularized shape seen is typical for planetary systems and can significantly affect the dynamics and the resulting contact patterns between the planets and the ring. Such a change in the dynamics of a gear train has a significant effect on the power density of the transmission system.

Deformation of a ring gear leads to a change in the meshing relationship. This in turn affects the dynamic load, sliding speed, and friction forces within the system, such as that presented in the video below. Changes in these characteristics result in power loss and increased vibrations that generate the majority of the noise produced by the transmission. In extreme cases, these changes can result in permanent damage.

To find the optimal acoustic behavior of a gearbox, an accurate simulation method to evaluate housing vibrations is very important. The advanced dynamic FE Preprocessor discussed in this article is truly unique. Its uniqueness is due to its ability to model the gear deformation and dynamics then predict the machine’s response. This preprocessor can also consider itself unmatch because it is able to capture all of the following:

To learn more about how you can apply this method in Simcenter 3D to an industrial application, please read this white paper on Improving wind turbine gearbox simulation

For more information on simulation modeling in Simcenter 3D, consider the following:

Bevel gears whine no longer due to unseen pressure. January 5, 2022 Introduction Drivers are familiar with using gears to overcome the limitations of their internal combustion engine (ICE). In addition to…
Simulate Bevel Gears Accurately and Efficiently October 28, 2022 Gears are crucial components in mechanical transmissions and products, essential to transfer energy between different axes of rotation, to change…
How to create and optimize the design of your external gear… April 14, 2022 Dive into the pump modeling world and find out how the Simcenter Amesim helps you create and optimize the design…
This article first appeared on the Siemens Digital Industries Software blog at https://blogs.sw.siemens.com/simcenter/gear-meshing-and-gear-deformation-produce-noise-but-how-do-you-prevent-it/