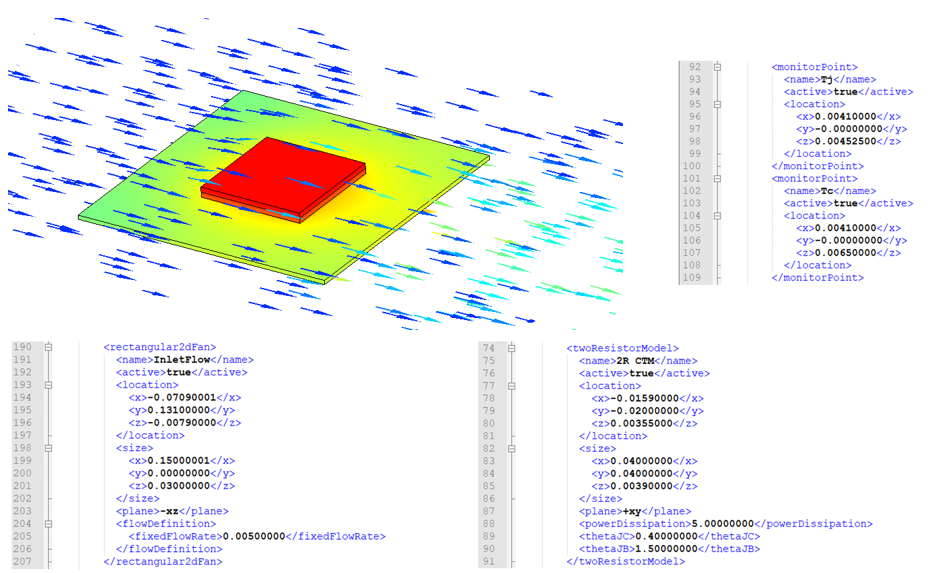 ‘Electronics Cooling eXtensible Markup Language’ (ECXML) is a neutral file format intended to facilitate the provision of thermal models from suppliers to end users, for use in 3D CFD thermal simulation tools such as Simcenter Flotherm, Simcenter Flotherm XT and Simcenter FLOEFD. A defacto standard for a number of years, ECXML is now published by JEDEC as the JEP181 guideline.

Best practices and proprietary data formats can be developed by any provider of software tools used to ensure thermal compliance of electronic products (or any product that contains electronics). However, to ensure mass adoption by the industry, standards bodies play a key role.

The JEDEC JC15 committee focuses on writing thermal standards to create a common reference point for the generation of thermal characterization data and thermal models. Siemens involvement with JC15 goes back to the mid ’90s where, as Flomerics, having led the EU funded ‘DELPHI’ project, we sponsored the standardisation of a method to extract BCI (boundary condition independent) CTMs (compact thermal models) of IC packages, published as JESD15-4. In addition JESD15-3 was published covering the simpler, but more common, ‘2-R’ CTM.

There are a range of electronic thermal simulation tools available on the market. There is also a requirement that a supplier of parts or sub-assemblies provide thermal models of their products to be simulated in their customer’s operating environments. Forcing a supplier to provide multiple proprietary formats that support these multiple tools is an onerous undertaking and one that, to date, has limited the availability of such simulation models.

Proposed initially by Mentor – A Siemens Business, this XML Schema can represent thermal modelling objects that are common between a range of commercially available electronics thermal simulation tools. Round Robin testing with other simulation tool vendors confirmed the format in 2015.

Both import and export of ECXML was then supported in Simcenter Flotherm.

Now that suppliers had the ability to generate and provide a single neutral format that could be imported into a number of downstream simulation tools, as opposed to supplying multiple proprietary formats, many of the barriers to model supply that existed previously were removed.

In 2019 a JEDEC JC15 ECXML working group was set up, with representatives from all major thermal simulation software providers and key electronics companies, which I had the honour of chairing. The intention was to standardise what had already become an industry defacto ECXML standard.

To do so a Guideline document was created, as an adjunct to the ECXML Schema, describing the format, the importing software specific interpretation of the ECXML data and a demonstrative worked example:

Unanimously passing both JC15 Committee and JEDEC Board of Directors ballots, the Guideline and associated ECXML schema were published as JEP181 on 17th September 2020.

As a thermal engineer tasked with predicting operating junction temperatures of a proposed design in a specific operating environment, the main issue you might face is lack of available data necessary to construct your thermal digital twin.

The standardised availability of ECXML will make available the data that you require, reducing time wasted on hunting down the information you need to perform your tasks, increasing your productivity and ability to innovate!

Simcenter™ FLOEFD™ 2021.1: What’s New? April 29, 2021 What's New in the latest Simcenter FLOEFD 2021.1 version? Electromagnetics, structural simulation and much more. Find out for yourself.
4 Myths about AI in CFD April 6, 2021 As Artificial Intelligence (AI) has become more ubiquitous in our everyday lives, so too has confusion about what it is…
Simcenter FLOEFD: CFD for Design-Engineers - Part 1 January 6, 2021 This is a 4-part series explaining why and how Simcenter FLOEFD is the right CFD software for design-engineers. Part 1…
This article first appeared on the Siemens Digital Industries Software blog at https://blogs.sw.siemens.com/simcenter/ecxml-jedec-jep181-thermal/