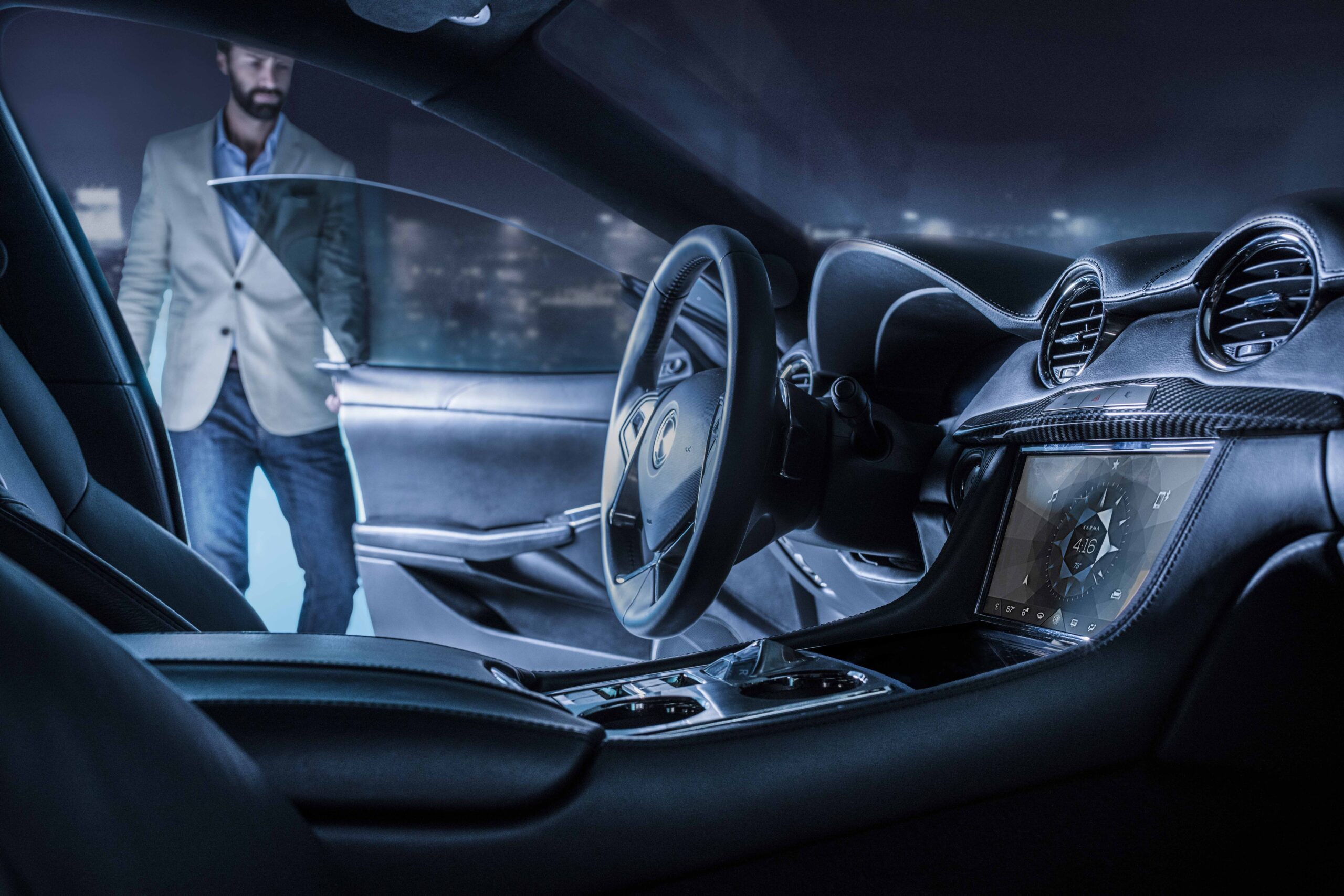 How does your electric vehicle sound? Discover why Simcenter adopts a people-centric approach to the NVH performance engineering of electric cars.

There’s no doubt about the future of transportation: it is electric. In many regards, electric vehicles answer the need for smart mobility. They allow for modular vehicle architectures, adapt better to the requirements of urban mobility, suppress harmful particle emission, and reduce noise pollution and nuisances in densely populated areas.

How does an electric vehicle sound?

Electric vehicles are often praised for being silent. While this is partially true, considering that they are quieter than regular combustion engine vehicles, they are still anything but soundless. They whizz, they whine, they hiss, they buzz. They tick, they click, they snap, they pop.

All the parts and pieces that compose the car make audible sounds when operating. Surely the decibel levels will not damage your hearing capabilities. But are the sounds pleasant? Think of the subtle whizz of a mosquito in a calm, tepid, summer night. Barely audible but unsettling enough to keep you awake most of the night.

I recently chatted with Steven Dom, Simcenter Automotive Expert, about the sound of electric vehicles. Steven has many years of experience in the NVH engineering of traditional combustion engines, modern electric vehicles, and more. So, I asked him: how do electric vehicles sound? And, most importantly, how should they sound?

To begin with, Steven Dom didn’t want to talk much about technology: “Over the years, we have gained tremendous experience in acting on the various noise sources that you find in an electric vehicle. We have expertise in almost all domains of NVH performance engineering. We’ve helped many companies, OEMs and suppliers, lower the noise levels of their vehicles and parts. But as engineers, when we tackle a noise issue, we run the risk of focusing on the technology and losing sight of the most important aspect of acoustic optimization: the comfort and well-being of the vehicle’s occupants”.

Indeed, Simcenter engineers are experts in strategies to reduce the noise levels of vehicles. From locating the origins of sound to applying proper insulating tactics, they master the know-how required to optimize the NVH performance of electric vehicles. For example, they helped the start-up Karma Automotive resurrect an iconic electric vehicle that meets the highest standards of comfort.

From hushing the noise to crafting the sound

To tackle the issue of perfecting NVH, Steven Dom still relies on the proven source-transfer-receiver. For over 30 years, the Simcenter engineers have employed the model to systematically address NVH issues. They scout for the problem’s root cause and analyze the transfer paths of sounds and vibrations to accurately resolve problems. But Steven Dom also takes a step back and reverts the model: the spotlight should not fall on the problem’s root cause, the source, but rather on the receiver, the human being who is experiencing the problem.

In fact, electric vehicles are not as quiet as we like them to be. Firstly, the electric and electro-magnetic parts in the machine often emit unpleasant high-frequency whizzes. Secondly, and that it is sometimes even more annoying, the comforting humming sound of the engine is gone and replaced by a range of unsettling noises: the rolling of the tires on the bitumen, the whoosh of the wind, the buzz of the wipers’ motor. A cacophony of trivial noises that our human brain, used to the sound of combustion engines, misinterprets as warning signals. Something isn’t functioning properly, is it? It shouldn’t sound that way, should it?

The question of how humans perceive the sound of an electric vehicle pops up even before a person sits behind the steering wheel. There’s no denying that electric mobility contributes to reducing noise pollution in urban areas. Nissan conducted an experiment in bustling Bangkok to prove its point: by diminishing acoustic nuisances, electric vehicles help combat mild to severe health issues.

Silent vehicles are great, but how silent are they allowed to become? Newer vehicles introduced in Europe and the US need to feature an acoustic vehicle alert system, in short AVAS. Pedestrian safety should not be compromised by vehicles that are too well-engineered. Early on, as part of the eVADER project, Siemens has been working on simulating and studying the detectability, annoyance, and branding of sound systems that harmoniously balance all the acoustic elements. Today, the active sound design technology permits an approach to sound engineering that does not only take pedestrian safety into account. It also considers their comfort while safeguarding the carmaker’s brand integrity.

A vehicle sound: more than just noise, the expression of a brand personality

In every challenge lies an opportunity. By forcing manufacturers to shape the sound of their electric models, governmental institutions have given them an excuse to invest more engineering efforts into the design of their acoustic signature.

From Audi to Mercedes, over the appealing Nissan’s Canto, car manufacturers take the sound design issue very, very seriously. The focus is not only on the high-end luxury models or the comfortable limousines. All brands, models and makes aim at authoring their acoustic signature, from the small urban Renault Zoe to the sporty Jaguar iPACE.

From engineer to psychologist: a fascinating perspective into the human mind

How do you let your inner artist express himself? Luckily for the engineer, some objective metrics aid in qualifying the depth, the tone, the fluidity, or the texture of a sound. Psychoacoustics is the science of sound perception. It studies the psychological and physiological responses associated with sound. It combines an objective assessment that analyzes the sound with quantifiable metrics and a subjective assessment that studies the perception of the sound, unveiling the positive and negative contributors to an agreeable or unpleasant sound.

Listen now to the sound of the SimRod, a fun all-electric sports car that serves as a test object for many Simcenter engineers.

So, does it sound nice? Not really: the SimRod is designed to satisfy your other senses and satiate your need for speed. Yet our engineers have nearly as much fun scrutinizing the sounds of the SimRod as they have driving it. And when it comes to creating the car’s digital twin, no aspect is negligible.

As said, AVAS has become a reason to invest in perfecting the vehicle’s exterior noise. But more care goes into designing the interior sound. The task is not a simple one.

Looking at the source-transfer-receiver model, Steven Dom admits that it is not enough to emphasize the role of the receiver (the occupant). The transfer path also deserves special attention. In a car, the vehicle body is the transfer path. All conventional combustion engines feature a relatively similar build, with the variants of traction or propulsion.

Meanwhile, there are no set rules for building the architecture of an electric vehicle. Where should the motor(s) lie? Or the battery pack(s)? The outcome might be a car that looks and feels entirely different: a blank sheet of paper for the NVH engineer. Established car manufacturers are facing rude competition from start-ups that are thinking fully out-of-the-box and daring revolutionary designs. Project Vector demonstrates that well-known companies also take up the challenge and rethink their principles.

Cascading sound design down to suppliers

Imagine that you’ve achieved the interior sound that you were targeting. From predicting e-motor noise and identifying system sensitivities in the concept phase to defining the optimal inverter control strategy that balances the switching noise with the vehicle’s driving performance, you’ve estimated the NVH performance in the earliest stage of conception. The vibroacoustic simulation models based on electro-magnetic loads calculation have validated the estimation. The final testing phase delivered the full vehicle diagnostic most completely and accurately. And despite the fact that the electrification heavily impacts the NVH balance, you’ve successfully deployed simulation and testing solutions to tame the aerodynamic noise.

It all sounds perfect until suddenly, like a mosquito in the night, you hear the annoying buzz of the window-opening motor. Noise emitted by ancillary systems accounts for 15% of the total noise contribution perceived in the car’s interior. Suppliers have been quick to realize that their components play an important part in the overall sound perception and design. NVH target setting evolves from defining a maximum acceptable noise level to detailing the characteristics of the component’s sound, as a contributor to the overall sound design.

The video “Simcenter Solutions for the NVH of Electrified Vehicles: Designing sound that adheres to the vehicle brand image” also reveals how Simcenter solutions help adopt a holistic approach to the engineering of hybrid and electric vehicles.

Despite his extensive NVH experience, Steven Dom is thrilled to say that he doesn’t know what the future looks like. Ultimately, autonomous electric vehicles increase the challenge for NVH engineers: acoustic comfort becomes the number one performance attribute. What will millennials expect compared to generation X passengers? How will an aging population alter the perception of comfort?

“There are so many angles to the question that we don’t know what the future will be made of. The car’s interior becomes a space that is not purely functional anymore. Of course, we can imagine many ways to enhance the sensory environment of the cabin, to meet and exceed passengers’ expectations. It will not be an easy challenge, which is why it’s such an exciting one!”

Or, explore the on-demand webinar series and discover how to optimize the NVH and acoustics of electrified vehicles and electric motors.

Steven Dom has been with Siemens Industry Software (and former LMS International) for over 20 years, working in various areas of engineering, engineering management, product management, and sales.

So, how should an electric vehicle sound? What’s the outlook for the NVH engineering of electric cars? Share your opinion or ask your questions to Steven Dom by commenting on this article.

4 Myths about AI in CFD April 6, 2021 As Artificial Intelligence (AI) has become more ubiquitous in our everyday lives, so too has confusion about what it is…
The 5 challenges affecting electric vehicle design and… February 26, 2021 Our automotive engineering experts share their insights into the challenges of electric vehicle design and development. Have you considered purchasing…
Veering Off Course: Transportation Emissions & The Climate… January 11, 2022 Can significant parts of transport be decarbonized with existing technology? What are the barriers?
This article first appeared on the Siemens Digital Industries Software blog at https://blogs.sw.siemens.com/simcenter/adopt-a-people-centric-approach-to-electric-vehicle-sound-engineering/