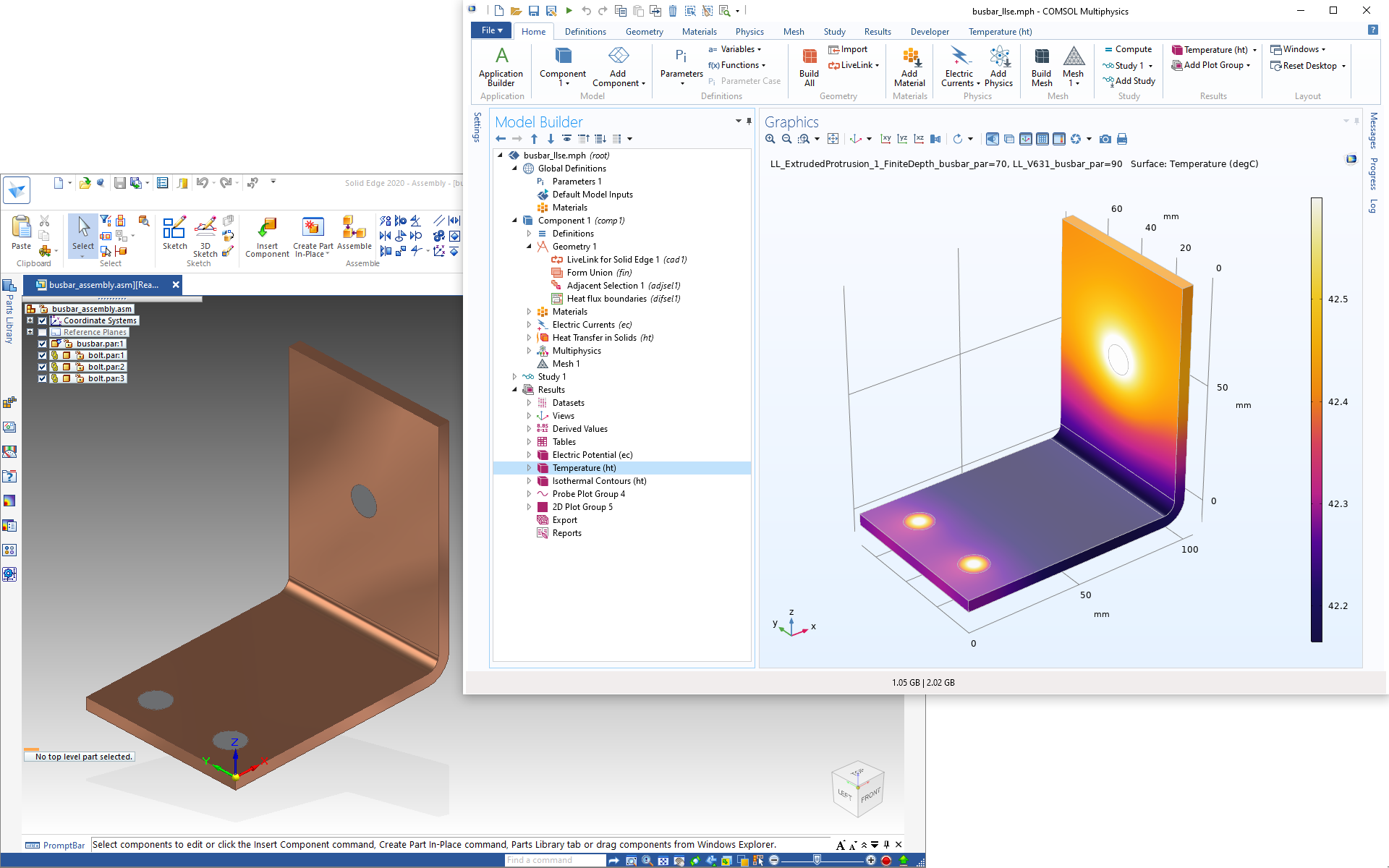 In this analysis of a busbar drawn in Solid Edge, an electric current passes through as simple assembly, causing an elevation in temperature, which is computed. The electrical conductivity of the materials can be temperature-dependent, making the problem two-way coupled.

At times I feel a kinship to Brad Pitts’s character in the movie, The Curious Case of Benjamin Button, who ages in reverse. The older I get, the more child-like amazement I feel about my chosen engineering field of CAE.

During my engineering training, I focused on the numerical simulation of mechanical and fluid problems. But by the time I finished grad school, I had grown frustrated with some of the limitations of those software packages.

An internship at the research center of carmaker Peugeot, modeling stamping operations, had fully convinced me that those software packages could save serious time and money over traditional trial and error approaches to design. It was not lost on me that the right software could compute quantities not easily measured, such as the strains deep inside a part during its manufacturing. I suppose I am preaching to the choir here.

But the world is about more than just fluid flow and structural mechanics in isolation. Alas, when multiple physical phenomena were coupled in non-trivial ways, those simulation packages became rather blunt tools. For example, I play electric guitar and had dreams of designing a better guitar amp. The truth was that no software I knew could, starting from the input current, simulate the electromagnetics in the coil, how the forces generated by the coil excite the dynamics of the cone, and how it all results in a sound distribution in a room. It was rather frustrating, having created the perfect CAD geometry in Solid Edge, to then be forced to make crude assumptions during the simulation phase of the project. Multiphysics phenomena are everywhere you look; in batteries, actuators, plasmas, touchscreens, sensors, medical devices- you name it, so this was not an academic concern.

Later, when I started looking for a job, I came across the COMSOL Multiphysics software. It was an eye-opening experience. Within a unified graphical user interface, it enables you to couple any number of physics you choose in any way you want. With many add-ons covering all engineering subfields, the software knows most equations you may ever need to solve. With the GUI being interpreted, you can even add your equations and couplings, without ever typing a line of code. How awesome is that? Long story short, 17 years later, I still work for COMSOL, and still marvel at the creativity this software unleashes in our customers. Like me years ago, you can suddenly clear years of frustration induced by being limited to simulating only one physics at a time. COMSOL’s LiveLink interface with Solid Edge lets you start modeling even while your geometry is still subject to changes. And you can create a custom graphical user interface for your models, turning them into stand-alone purpose-built simulation tools usable by colleagues and clients alike, with no experience required.

Evermore challenging real-world engineering problems, interdisciplinary as they may be, are being conquered every day, all for my childish delight. I expect many more years of growing younger.

Here is a great user story about how Signal Microwave uses COMSOL Multiphysics®, as well as the add-on RF Module and LiveLink™ for Solid Edge® interfacing product to design test connectors.

Jeff Hiller is the VP of Business Development at COMSOL, Inc after starting as an Application Engineer at the company. He has over 20 years of experience solving and helping others solve engineering challenges through simulation software and establishing prosperous partnerships.

Looking beyond home-grown production scheduling tools September 15, 2021 When speaking to SMBs across North America, you’ll often hear planning and scheduling professionals say that they use a “home-grown”…
How efficient is your parts management? September 27, 2022 “Back in the day…” is the start of many stories about the past. Well, back in the day, when industrial design…
Q&A: Application development platforms - a partner's… January 6, 2021 A Q&A session featuring Remi Duquette, Vice-President of Innovation & Industrial AI at Maya HTT and Dave Weinand, Chief Customer…

This article first appeared on the Siemens Digital Industries Software blog at https://blogs.sw.siemens.com/partners/integrating-multiphysics-simulation-3d-design-workflows-solid-edge/