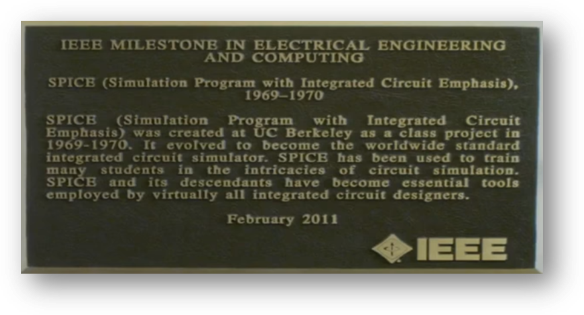 50 years ago on 4 August 1971, the IEEE Journal of Solid-State Circuits published the Dr. Nagel and Dr. Rohrer article on Computer Analysis of Nonlinear Circuits, Excluding Radiation (CANCER) paper. Not too long after this, a “better” name was given to the work and CANCER became SPICE – or Simulation Program with Integrated Circuit Emphasis.

The 50th anniversary celebration can be contested given work on this began in the 1969-70 academic year at UC Berkeley EECS Department. So maybe it is a bit older than 50. I would also imagine that most of us with electrical engineering degrees have used SPICE or a derivative in our studies. I count myself as being extra lucky to get a shareware tape of cad tools from the Hewlett-Packard CAD Lab at the end of a summer internship. As lucky as I was, I still need to apologize for brining a lab full of students learning program languages while being a system operator. You see, I took over the system to run my SPICE simulations.

I’ve also had the privilege to support commercial implementations of SPICE as well as to work on other technology with those who helped craft SPICE 2g6 and SPICE 3 at UC Berkeley here at Siemens EDA.

While I am several years removed from the analog world, I have watched the “shareware” concept of SPICE grow into a large open-source world that merits a reflection back on the path SPICE offered us. In the digital design community we enjoy with creations like UVM. And in the not too distant future, there will be additional open-source implementations to support analog/mixed-signal verification methodologies too. Stay tuned!

If you want to take a look back at the History of SPICE, the 40th anniversary talk by Dr. Laurence Nagel, a link to the IEEE Council on EDA archive is below.

This article first appeared on the Siemens Digital Industries Software blog at https://blogs.sw.siemens.com/verificationhorizons/2021/08/04/spice-turns-50/