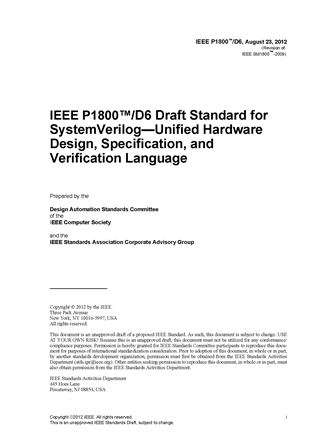 The new standard has many new features, numerous clarifications and various corrections to improve the standard and keep pace with electronic system design and verification.  DVCon 2012 included a session presentation, Keeping Up with Chip – The Proposed SystemVerilog 2012 Standard Makes Verifying Ever-Increasing Design Complexity More Efficient” that detailed the standard.  The paper was written by Stuart Sutherland (Sutherland HDL, Inc.) and Tom Fitzpatrick (Mentor Graphics).  You can find a copy of the paper here at the DVCon 2012 archive and the presentation can be found at Sutherland HDL’s site here.

For users of Mentor Graphics’ Questa Verification Platform, many of the major SystemVerilog 2012 features can be used today, like multiple inheritance.  As Stu and Tom said in their presentation, “This is BIG!”  If you read their full paper, they discuss some ways this new feature might be useful for a UVM testbench.

Major work was done to augment the current notion of constraints in SystemVerilog.  In past versions of the standard they were known as hard constraints.  What this meant was all the conditions of the constraints had to be met otherwise there would be an error.  There was no built-in method to relax the need to satisfy the constraints.  Given the world of multiple constraints is the norm for testbenches today the potential for conflicts between them is high.  To alleviate this the SystemVerilog Working Group introduced soft constraints to the standard.  If you are interested in the details of what was proposed to be added the standard, you can reference the full proposal here that is included in the standard.  Stu and Tom said that “This is also a big enhancement!”

IEEE 1800™-2012 has only now been approved.  The standard itself is not ready to be published yet.  Plans are to have it ready to be published before DVCon 2013, which is scheduled for late February 2013.  I will  share publication information as it becomes available.  And, I hope you join me and attend DVCon 2013 where we can plan to celebrate the unveiling of the published standard.

While the IEEE publication will be the authoritative source on the standard, I have pointed to the presentation and paper by Stu Sutherland and Tom Fitzpatrick for information on the new standard that you can reference now.  For those who depend on assertions, you will find SystemVerilog-2012 has a major update with enhancements for properties and sequences in the area of immediate assertions, data type support, argument passing, vacuity definitions, global clock resolution and inferred clocking in sequences and much more.  You may find the SystemVerilog Assertions Handbook 3rd Edition by Ben Cohen, et. al. to be of value as well.  You can find more information about it on Amazon.com here.

There is much more to the SystemVerilog-2012 story I will share more of that in the months ahead.  The global team of experts who have put this together has been an outstanding collection of individuals ranging from producers and suppliers of electronic design automation software to consumers of said technology who have ensured the language can be used to design and verify the most demanding of electronic systems.

Stay tuned!  For now, I encourage you to get informed!

Leave the House With a Clean Design September 14, 2021 Wouldn't it be great if there were something that would stop you from leaving the house wearing mismatched clothes -…
Clearing the Fog of ISO 26262 Tool Qualification April 13, 2022 Developing products to the ISO 26262 standard requires many activities across multiple disciplines. One of those activities is ensuring the…
Getting your Safety Architecture just right February 4, 2022 Introduction In a recent industry survey, roughly 40% of ASIC and FPGA project starts had functional safety part of their…

This article first appeared on the Siemens Digital Industries Software blog at https://blogs.sw.siemens.com/verificationhorizons/2012/12/05/ieee-approves-revised-systemverilog-standard/