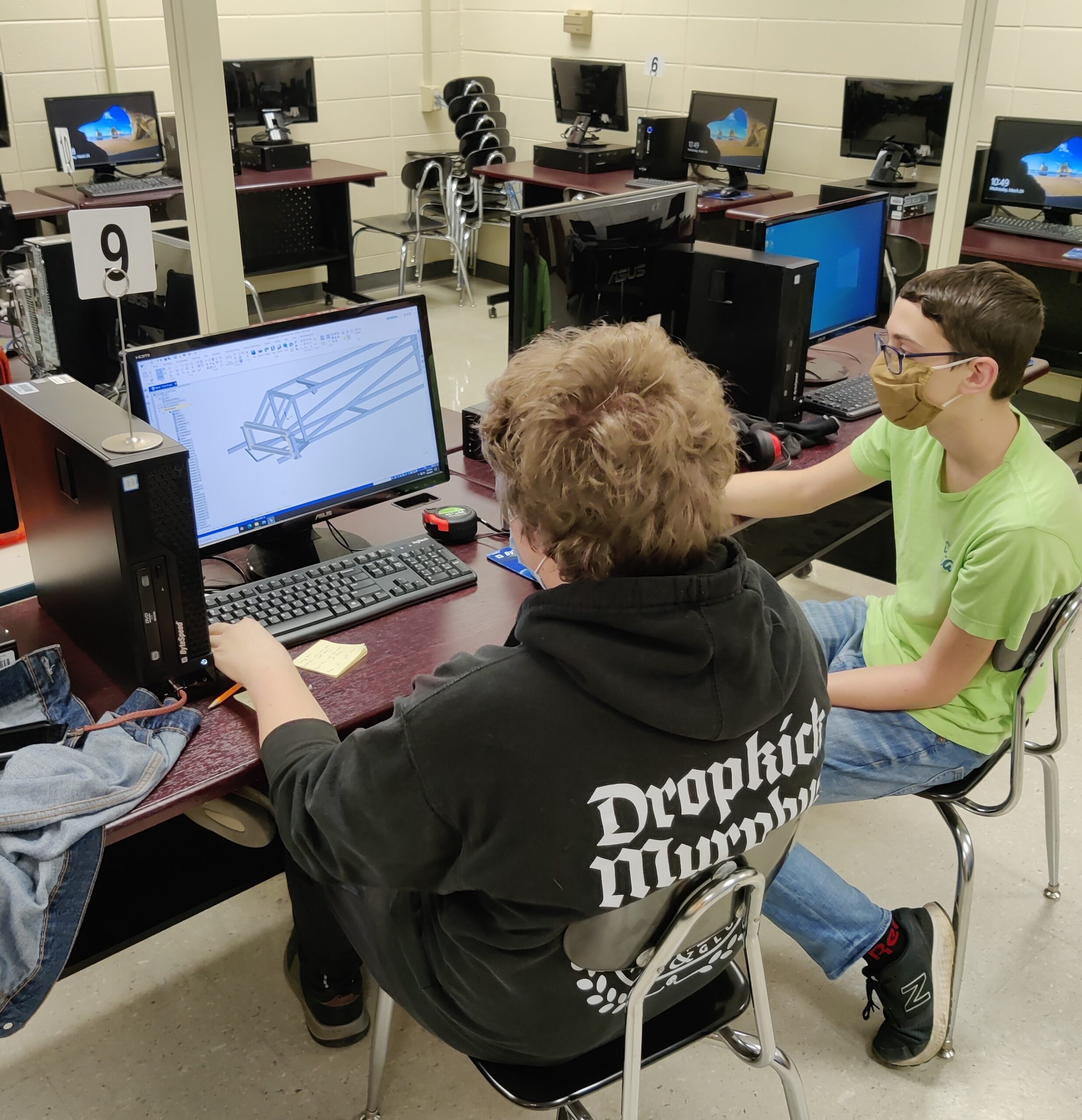 Engineering has been a major in universities for centuries, but for as long as humans have been on Earth, we have looked for better or easier ways to accomplish the task at hand. In recent years, our technology tools have advanced at lightning speed and show no sign of slowing down. In our hurry to keep up, are we leaving something behind?

Many feel that the skill of problem solving is being forgotten. With everyone searching for answers online, are we losing the problem-solving skills that have traditionally led engineers to great accomplishments?

One educator who is teaching students the art of problem solving and developing their engineering skills in high school is Brian Coleman, a technical education teacher at Somerset High School in Winchester, Kentucky.

“It’s an intentional desire to reintroduce the problem-solving ability to students and the ability to think creatively in different environments,” he says. This idea led Coleman to a new endeavor: working to revamp the engineering curriculum and start up a solar car team at Somerset High School.

Building a solar car with students

Many people are familiar with the various solar car races that exist these days. Coleman introduced the concept at Somerset High School to some initial skepticism as to whether it would work out. Now, however, the students are diving into multidisciplinary project learning like never before.

When the school agreed to start the solar car program, Coleman realized the school did not really know what they were in for. “The only experience they had was with people doing CO 2 cars,” he says. “They thought we were doing RC [radio control] cars, until all of a sudden about three months later, they walk into our shop and they see something that is 16 feet long.”

Solar car racing is less about the race itself and more about the design challenge and problem solving. Many of these high school students have had little, if any, hands-on experience designing and engineering a project. This all falls right in line with Coleman’s efforts to help educate the next generation on problem solving, rather than just finding the answers.

The students on the team were well on their way to building a working solar car, but Coleman realized that some of their design needs were not being met. With a drivable car and multiple layers of mechanical and electrical design needed, it was apparent that they needed something more robust than the open-source CAD programs they had been using.

“The software that they were using was not sufficient for the high level of design that we were planning,” Coleman says.

Before teaching, Coleman had experience with IT and engineering from his time in the Air Force and from running his own business, so he was familiar with a number of CAD programs.

There are a number of CAD software companies that target educational institutions and many of them have an “educational” version. But Coleman wanted something that fit the needs for both newbies and senior students. This meant finding a software that was straightforward and teachable, but which also had the tools and power to get the work done that his students needed for bigger projects, such as the solar car race.

After some research and doing some side-by-side comparisons, he concluded that Siemens Solid Edge had more of what his students needed.

Coleman had a few students with some experience using other CAD software and they were understandably hesitant to try Solid Edge, which was completely new to most of them—just as engineers might be. The concept of CAD is straightforward, but if you are accustomed to certain keystrokes or the placement of features, it can be a nightmare to switch to a different software.

“If you’re experienced with one 3D modeling software… you’re accustomed to where things are,” says Coleman.

Learning CAD for the first time is no small task, either. Many students at the freshman level are more accustomed to using their smartphone than a computer. Navigating something as complex as CAD at the high school level can be a challenge with new terminology, new concepts and a vast array of functions.

“Every one of those that switched to Solid Edge from something else, without fail, have said, ‘I now realize why you wanted to switch. This is so much better than what I was using before.’ Now they’re all about Solid Edge and what it has to offer them,” says Coleman.

He also saw students who were brand-new to CAD pick up Solid Edge without a hitch.

He had one student design their team’s solar car in just three weeks, even though he was using Solid Edge for the first time. “He had no experience, zilch. In three weeks, he designed the car to such a degree that he won the Siemens Award for our division the first year we entered the competition.”

Now, thanks to its intuitive nature, Coleman’s students use Solid Edge in every aspect of engineering throughout all their classes, as well as on the solar car project every year.

Coleman’s technical education courses are not like the tech ed courses that many of us remember—they are doing far more than just building bird houses. His freshmen started learning CAD and 3D modeling right away, and that carries them through their stay at Somerset High School.

“As a career and technical education instructor within the technology fields, that allows me to help students make connections between their interests and the varying avenues that exist within technology and engineering,” says Coleman.

When he first arrived at Somerset High School, the students had little exposure to 3D modeling, so he proceeded to introduce every student in the department (104 in total) to Solid Edge. “After about the first semester, every one of my students were caught up with CAD to where they could design just about anything we wanted them to.”

Coleman has also revamped the engineering courses since arriving at Somerset High School and added everything from mechanical and electrical engineering to robotics and 3D printing.

This is where Solid Edge provided some unexpected opportunity. Coleman and his students use an academic license of Solid Edge, which gives them access to a full suite of tools for both mechanical and electrical design. This has allowed the students to design and build their solar car, and more.

Students can also access professional software capabilities such as project management tools. This gives them the real-world experience of engineers, who have to deal with more than just modeling parts, Coleman explained. “When you combine that with a large-scale, project-based learning initiative, it allows them to use real-world software in a real-world application that better prepares them for future engineering work.”

Project management may not be the most exciting work that engineers do, but it is essential. Schools having access to a full suite of products enables a well-rounded engineering education, rather than being solely focused on one aspect or another. “Students don’t always see the value now, but almost without fail, every student that goes into a field related to engineering afterwards realizes that they’re ahead of their peers.”

Coleman continues to work toward helping the upcoming generation of engineers learn to problem solve and find solutions instead of answers. “We’re trying to make lifelong learners out of them and how to learn is just as important as what you learn, because they’re going to have to keep up with change in the future,” he says.

Solid Edge software seems to be making all the difference in Coleman’s work as his students graduate into the working world. Some of them have stayed in touch and let him know about their achievements at Venmo, NASA, the United Nations and beyond. Multifaceted, project-based learning seems to be working in Kentucky.

Free software for students and educators

Siemens Digital Industries Software is committed to empowering the next generation of digital talent with the engineering design skills employers need. We provide a wide range of learning resources for educators, students and academic institutions, including software, training resources, and industry certification.

STEM education leaders help Siemens prepare a new generation… January 27, 2022 Register now for free to join Stage Two's livestream and the Siemens Digital Experience powered by Scasa on October 29th.…
Developing tomorrow’s engineers: Siemens partners with ReDI… September 14, 2021 Amid the pandemic, digitalization has become more important than ever. We've come to realize that digital skills have become critical…
Women in Engineering Day Spotlight: Interview with Yossra… June 23, 2021 Meet Yossra Gherairi, a sales engineer at DigiCAD and standout Olympic fencing champion. She shares with us what it's like…

This article first appeared on the Siemens Digital Industries Software blog at https://blogs.sw.siemens.com/solidedge/problem-solving-vs-finding-answers-starts-in-high-school/