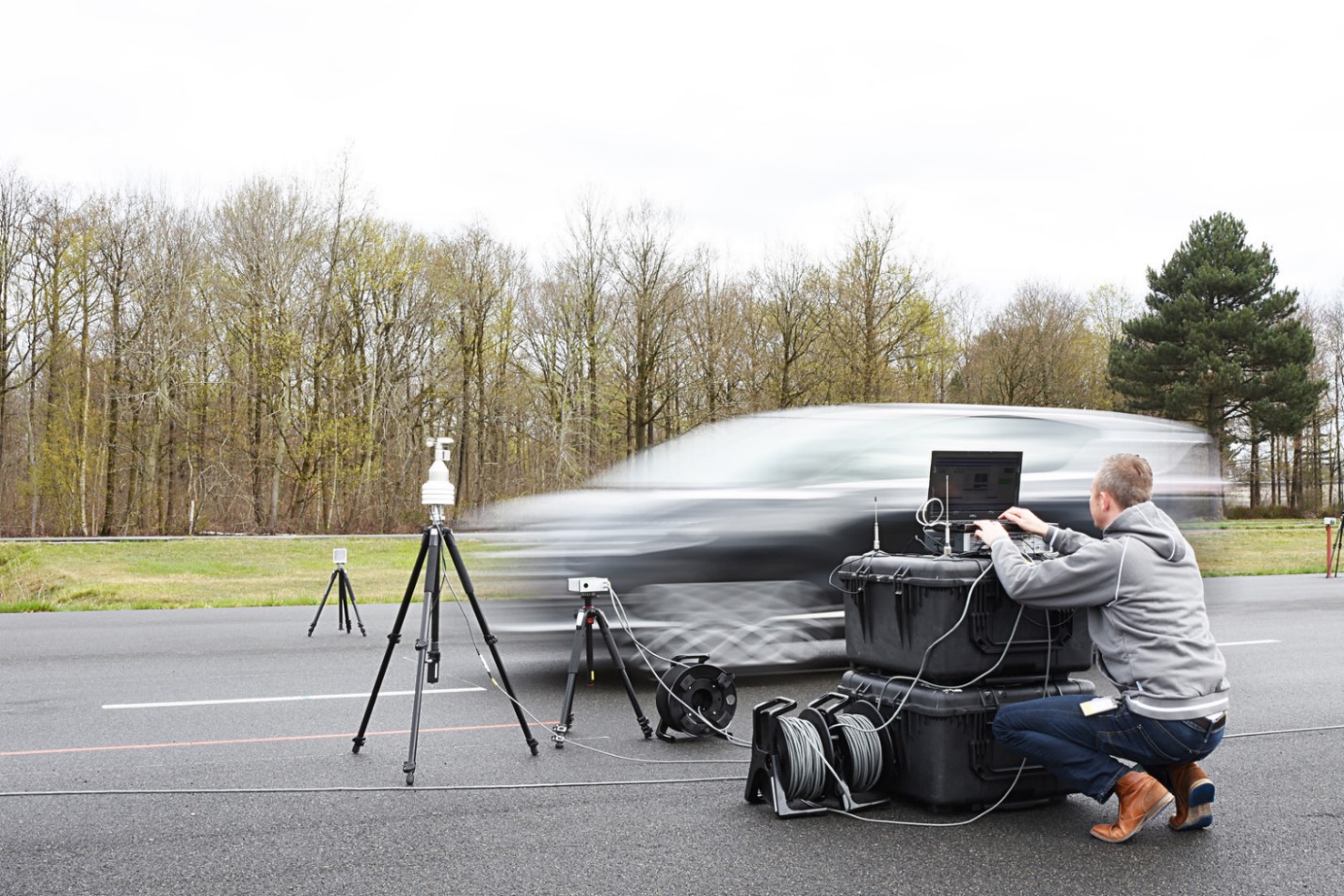 Have you heard of the term ‘Digital Twin’? It refers to a virtual representation of a physical object that behaves identically across all design domains. They move and vibrate the same way, experience the same temperatures, deliver the same power and even run on the same control software as the real thing. There is just one colossal difference: Digital Twins can be infinitely modified and analyzed to optimize their design across all these domains.

While this does sound attractive, as a test engineer I notice that many of my customer contacts struggle to see the value in their daily work. Their responsibilities and deliverables are bound to physical prototypes after all, what use is a virtual prototype if you can’t glue a sensor to it?

Let’s take Pass-by Noise as an example. Every road-capable vehicle must meet regulations that limit how much noise pollution they emit into the environment. Pass-by Noise engineers are responsible for ensuring that all vehicle models and their variants successfully pass their Pass-by Noise homologation tests. However, the final certification can only be performed on a physical production model of that vehicle.

Unfortunately, Pass-by Noise certification has become extremely challenging over time. The markets demand increasingly customizable vehicles, while the regulatory requirements become stricter every year. The result is an explosion in both the number of vehicles and the time required per vehicle to pass certification.

To make matters worse, problems are often only discovered very late in the design process since Pass-by Noise testing relies heavily on physical prototypes. This puts Pass-by Noise engineers under immense time pressure to find solutions when such problems occur. There is a high risk of implementing sub-optimal solutions that negatively cascade into other domains, such as tuning the engine controls to reduce noise levels while also reducing fuel efficiency and performance.

What if I told you that the Digital Twin offers an easier way to meet Pass-by Noise regulations?

Let me be clear here: nothing can replace physical prototypes for Pass-by Noise homologation tests. However, using the Digital Twin I can provide answers to the following questions:

Curious? Then join me in taking the red pill and I will show you how deep the rabbit hole goes.

Reducing the reliance on physical prototypes

Moving from physical to virtual prototypes requires a method to predict the NVH performance of a fully assembled vehicle. This can be achieved by splitting the problem into two parts.

On the component level, we need a way to define each component’s behavior in isolation. Some components will be actively generating noise, such as the powertrain, while others are only passively shaping it, such as the body trim material.

On the assembly level, we need a way to define how component behaviors change when connected to each other. For example, the same powertrain integrated into two different vehicles will not necessarily have the same contribution to Pass-by Noise levels.

All of this is exactly what we do in Simcenter Virtual Prototype Assembly. This is a ‘bottom-up’ approach where analysts build virtual assemblies by connecting components from a component library to each other. Simcenter Virtual Prototype Assembly allows the analyst to predict the overall noise and vibration performance of the assembly, as well as the individual contributions per component.

How is this possible? You can find out more about the technology that drives Simcenter Virtual Prototype Assembly in some of our earlier articles.

Predicting the noise emission of a virtually assembled vehicle is a great start. However, Pass-by Noise certification requires more than just a single data point. The final noise level is derived from a combination of driving conditions and vehicle parameters. All this data should be collected and presented in a way that makes sense for Pass-by Noise analysts.

Simcenter Virtual Prototype Assembly is made more effective for analysts with the addition of application-specific dashboards. The Pass-by Noise dashboard for example puts the predicted Pass-by Noise performance front and center while moving data management to the background

Analysts can focus on comparing contributions from individual components to the overall Pass-by Noise level. They can even apply modifications directly to the underlying virtual prototype and predict their effectiveness as a design target. For example, you may know from experience that the noise leakage of the muffler could be reduced by 2 dB by improving its acoustic treatment. How significant would the impact of this modification be on Pass-by Noise? Are there other more effective measures to spend time on instead?

Keeping control of the explosion of vehicle variants

Consider for a moment how many vehicle variants a Pass-by Noise engineer could be faced with. A particular vehicle model may have 3 – 4 powertrain variants with varying performance and energy sources. However, during their development many intermediate versions of these variants will also be created with slightly different transmission ratios or engine control software for example.

Is it feasible to re-run the Pass-by Noise tests every time a component is updated to assess the impact?

Well, Yes! This is exactly what Simcenter Virtual Prototype Assembly allows Pass-by Noise engineers to do. Let’s say that your exhaust system supplier hands you a new milestone version for your component library. How long would it take you to integrate this new component in a particular vehicle variant?

Unlike physical prototypes, Simcenter Virtual Prototype Assembly allows Pass-by Noise engineers to swap out components in seconds. This can be used to compare components directly, or to prioritize verification testing on the worst-performing configurations.

A major and unavoidable risk in Pass-by Noise certification is that problems can appear in very late design stages due to the reliance on physical prototypes.

A key insight here is that the component data used in Simcenter Virtual Prototype Assembly can be delivered by CAE experts, testing experts, or even a combination of both. This completely transforms the way we need to think about prototypes. Instead of being static representations of certain development milestones, they can fluidly adapt to whatever development stage is appropriate at the time.

In early development stages, it is likely that components only exist as simulation models which undergo rapid design iterations. The effect of such design iterations on Pass-by Noise performance can already be predicted at this stage using Simcenter Virtual Prototype Assembly.

As the development matures, simulation data will slowly be replaced by test data obtained from physical prototypes. This allows increasingly accurate predictions to be made on the Pass-by Noise performance of the full vehicle and provides an early warning system while finalizing components and working on their integration.

Full vehicle prototypes are still required at the very end of the development process for certification testing. However, using Simcenter Virtual Prototype Assembly the risk of identifying Pass-by Noise problems at this stage is reduced to a minimum.

More than 2500 years ago the famous Chinese military strategist Sun Tzu realized that in war the key to victory is in anticipating and preparing for the battle ahead. In the context of this article, if you are not actively working on Pass-by Noise engineering well before physical prototypes are available, you are setting yourself up to fail.

Simcenter Virtual Prototype Assembly allows you to predict the NVH performance of a fully assembled system from component-level data. This means that late-stage design targets can be taken into account much earlier in the design process, resulting in better overall design decisions and fewer unwelcome surprises at the end.

If you want to know more, I suggest some interesting reads below:

This article first appeared on the Siemens Digital Industries Software blog at https://blogs.sw.siemens.com/simcenter/take-control-of-pass-by-noise-with-a-virtual-prototype/