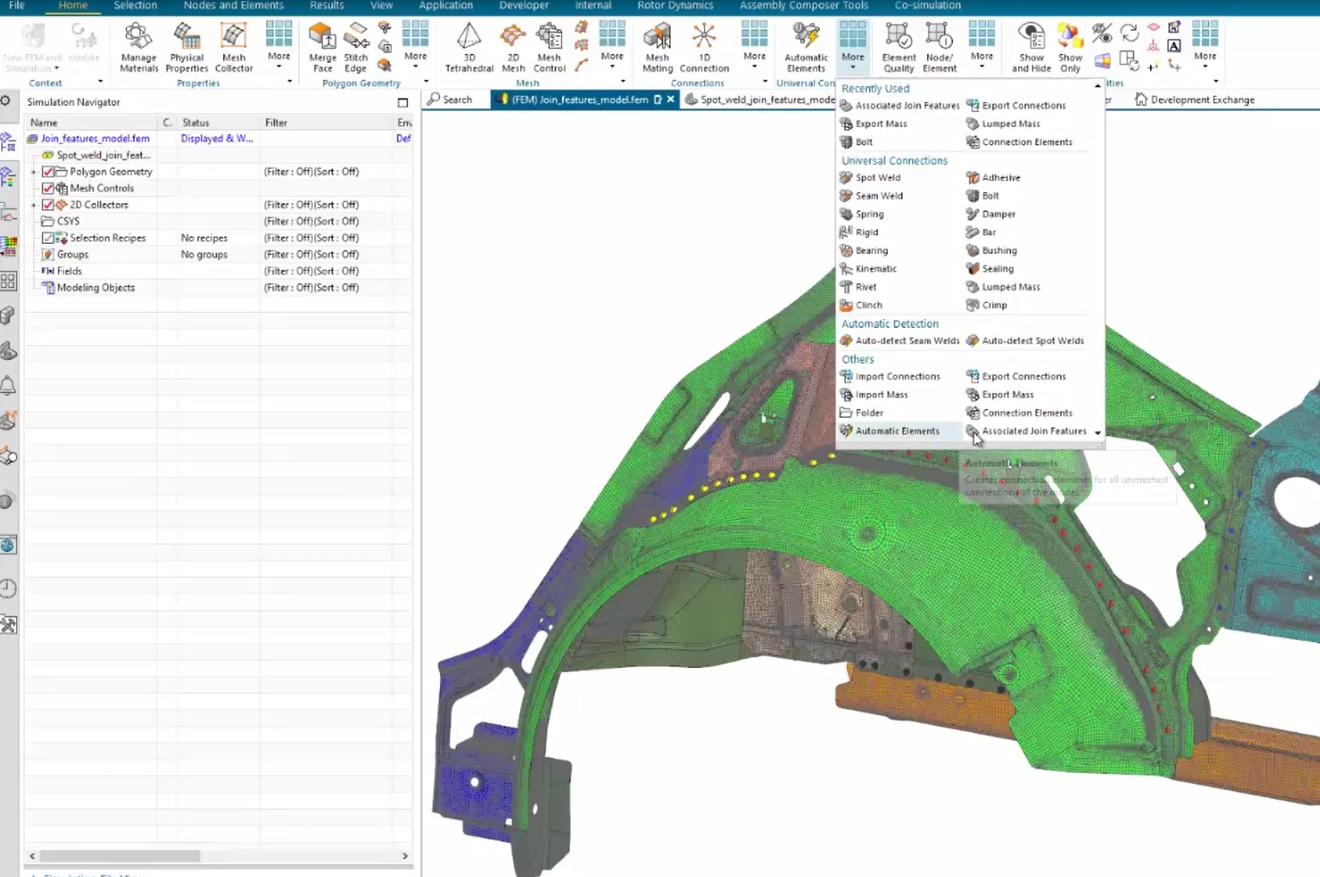 NX Join reduces the time needed to place and define fasteners and hardware. NX Join targets users of fasteners in CAD models. It enables faster placement of locations and establishes relationships with parent parts. Thus providing additional intelligence to the Join features in the model and integrating CAD and CAF further.

The integration of NX join into Simcenter 3D 2206 makes it possible to dramatically speed up the design and analysis process for connecting components, such as spot welds and rivets, that are in assemblies.

Creating a finite element model from a complex CAD assembly requires many steps, including modeling the connections between components. Complex assemblies may require hundreds or thousands of connections. The process for defining connections across design and analysis typically involves multiple software tools and/or customized code. In the past, there was no support for the communication of connections from the CAD design to the CAE analysis, in a smooth out-of-the-box function, in off-the-shelf software – until now.

Reducing the number of steps

What these tools can do for you

These tools make it possible to have a single source definition for the connections of an assembly. This ensures the smooth transfer of this information from your CAD to your analysis. The associative relationship between the CAD and CAE connection definition speeds up the initial creation of the connections through the process and provides a quick turnaround when changes are made to connections in the source model. These tools greatly reduce the chance of errors due to CAD and CAE models being out of synch. This leads to increased confidence in the manufacture of products as well as their performance in the field.

See what else is new

4 Myths about AI in CFD April 6, 2021 As Artificial Intelligence (AI) has become more ubiquitous in our everyday lives, so too has confusion about what it is…
Model-based design from ICEs to ICUs: Bridging the… November 10, 2021 The events of the past few years have turned global attention towards health and, more specifically, healthcare. From the images…
If you can’t take the heat… Simulate it! Reducing VTM costs… June 10, 2021 Find out how to efficiently and accurately simulate VTM using Simcenter Engineering's multi-fidelity workflows.

This article first appeared on the Siemens Digital Industries Software blog at https://blogs.sw.siemens.com/simcenter/integrated-cad-and-cae-fasteners-with-nx-join-and-simcenter-3d/