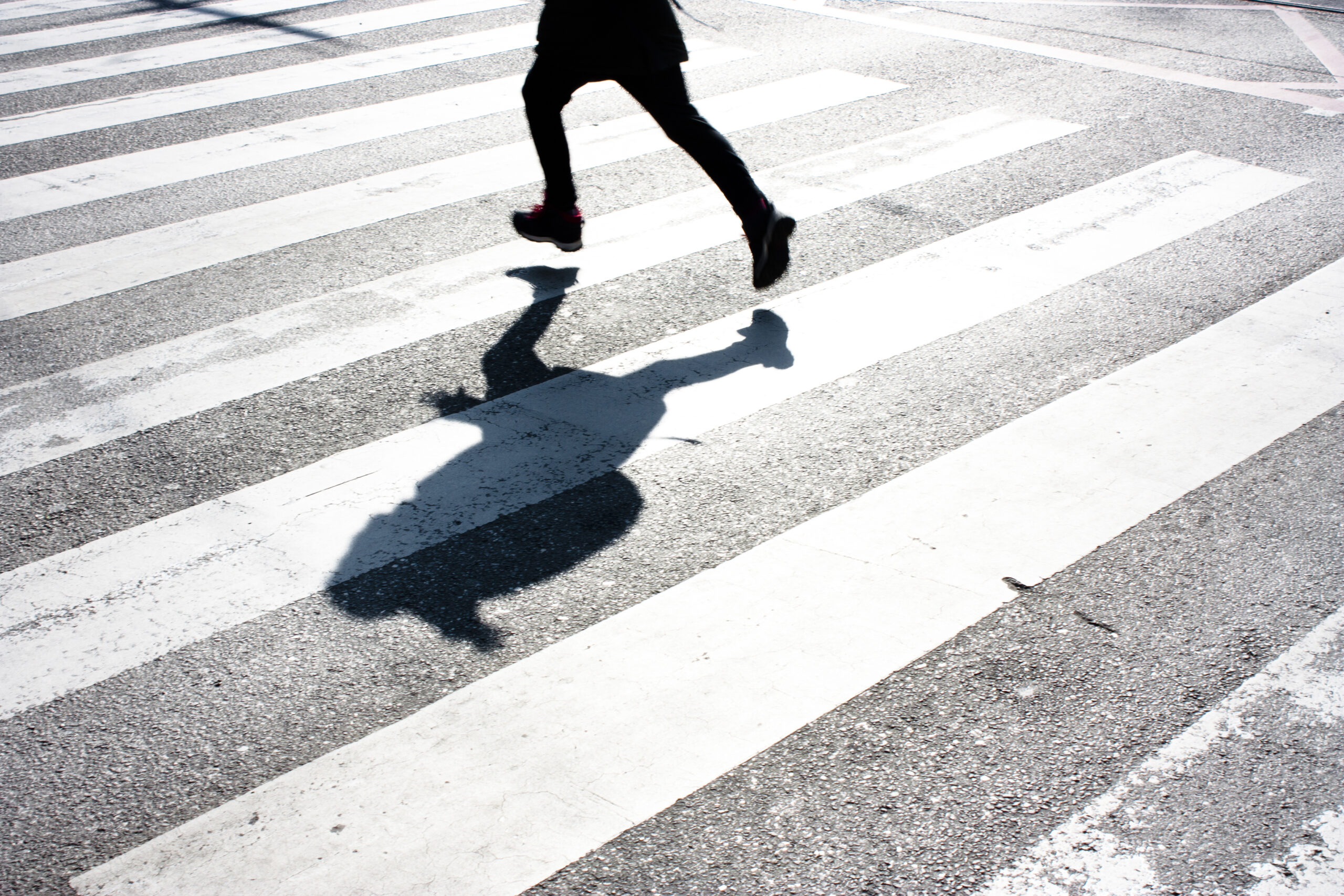 Blurry child's legs and kid's shadow with a backpack, on zebra crossing while running over the street in black and white

Nearly 20% of all road accident fatalities in the EU are pedestrians. Car manufacturers all over the world want to improve pedestrian safety. In this blog, we share the story of the world’s leading mobility engineering experts, the EDAG Group AG in Germany.

Remember those adverts where a car drives into a wall, and the crash-test dummies inside are left intact? If you watched closely, you might have noticed that different dummies are used in different tests. This is because they are highly calibrated for each test, and any changes will affect their validation. You might have also noticed that the acceleration given to the car is always in one direction. This ensures the dummy does not change position before impact. The dummies are passive objects and can not reposition themselves. A test is ruined if they move out of position before the impact.

Firstly, you can’t test until you have built a complete physical prototype. Secondly, you will need to destroy multiple vehicles to complete all the validation tests. Thirdly, you can not quickly test pre-crash maneuvers such as lane change.

From physical to virtual dummies

A few decades ago, manufacturers had to crash over a hundred vehicles while designing a single model. Today, only a fraction of that number is required. With the use of virtual models, engineers can design new, safer models quicker and more cheaply.

This means that not only can you get the most realistic assessment of what will happen to occupants and pedestrians in a collision, but you can also carry out testing much earlier in the development phase. Once you have your virtual vehicle model, combine it with your Simcenter Madymo model, and you’ll get accurate test results before you’ve built a single prototype.

Crash Test Innovation of the Year

Clearly, I’m not the only one who thinks so.

In 2021 Simcenter Madymo was named the ‘Crash Test Innovation of the Year’ by ATTI magazine.

It is no wonder that more companies are turning to this simulation software to aid vehicle design.

The Active Hood is a common pedestrian safety solution for minimizing head injuries when a pedestrian is struck by a car. By automatically lifting the hood when a collision is detected, a space is created between the inside surface and the rigid components underneath. This ensures that when the head hits the hood, the head is much less likely to suffer serious damage.

In case of a collision, the active hood system triggers the hood to pop up, creating enough deformation space to prevent the pedestrian’s head to hit the unbending engine block.

But to develop an effective Active Hood, engineers need to understand exactly how a human body will behave when struck by that vehicle.

This is where Simcenter Madymo comes in

The CAE and Safety department, led by Stefan Hundertmark, uses Simcenter Madymo to simulate the kinematic behavior of pedestrians’ bodies in accidents to help their customers develop the safest possible vehicles. Read the case study to discover how Simcenter Madymo allows them to significantly reduce simulation time for human body behavior from days to hours while meeting all the necessary standards and regulations in pedestrian safety performance.

“When dealing with milliseconds,
response times are critical.
Simcenter solutions combine the
power of multibody modeling with
the detail of finite elements and CFD
in one solver to achieve that.”

You can also find out more about how Simcenter Madymo enables manufacturers to meet regulations by watching the pedestrian safety systems webinar featuring Assistant Professor Corina Klug of TU Graz and Cindy Charlot, technical lead of the Safety and Comfort Modeling team of Simcenter Madymo. Corina Klug was instrumental in creating the Euro NCAP guidelines, which reduced EU pedestrian fatalities by 36%. Cindy explains how to use Simcenter Madymo in the validation process and how to comply with all certification requirements.

The ultimate aim for The EDAG Group and other companies using Simcenter Madymo is to eliminate all traffic fatalities and severe injuries.

That might sound like a pipe dream, but it forms part of a global movement known as Vision Zero.

The campaign began in Sweden in the 1990s and has since proved successful across Europe and is now gaining momentum in the United States.

First and foremost, it challenges the traditional belief that road traffic deaths are inevitable and that saving lives is expensive. Vision Zero accepts that human failure and collisions will happen, but with a systemic approach, we can prevent fatal and severe crashes that lead to deaths.

Simcenter Madymo is a key element of Vision Zero as its occupant and pedestrian safety simulations help manufacturers design vehicles that offer the most protection.

Car manufacturers such as Volvo incorporate zero accidents in their vision. The basic philosophy of the Volvo Group Safety Vision is that accidents can be prevented. At the same time, they are aware that many things are outside of their control. This is why collaboration with other players is important. And change is happening. Also, suppliers such as ZF or Continental go the extra mile to contribute to the zero fatalities future. For more information, read this article on how Continental is heading for Vision Zero.

In fact, they make it even more important.

Even with self-driving vehicles, collisions will still happen. The artificial intelligence controlling the vehicle needs to be able to minimize injury and calculate the best course of action in a split second. It’s no use swerving to avoid one car if that takes you into the path of several cars and causes a bigger crash.

Using Simcenter Madymo, developers of these systems can train them to maximize occupant and pedestrian safety. By understanding exactly how human bodies will be affected by collisions, AI can determine which action will result in the least injury. So instead of swerving, it may simply choose to brake. While not avoiding the collision completely, the reduction in speed, combined with ensuring airbags fire at the right moment and the seat belts do their job, will be enough to prevent serious injury. Ultimately, it will lead to fewer deaths, which is the number one priority on the path toward Vision Zero.

Continuous Automotive Test Innovation within Simcenter… November 26, 2021 Simcenter Madymo road scene Siemens Simcenter Madymo has been awarded the ‘Crash Test Innovation of the Year’ for 2021 by…
6 inspiring applications of CFD software for vehicle water… June 24, 2021 Vehicle water management has become more important today than ever before due to the increase in autonomous and electric vehicles.
A simulation approach for autonomous heavy equipment safety January 22, 2021 The key pillars leading to a strong simulation framework dedicated to heavy equipment autonomous operations development, applied to an autonomous…

This article first appeared on the Siemens Digital Industries Software blog at https://blogs.sw.siemens.com/simcenter/edag-improves-pedestrian-safety/