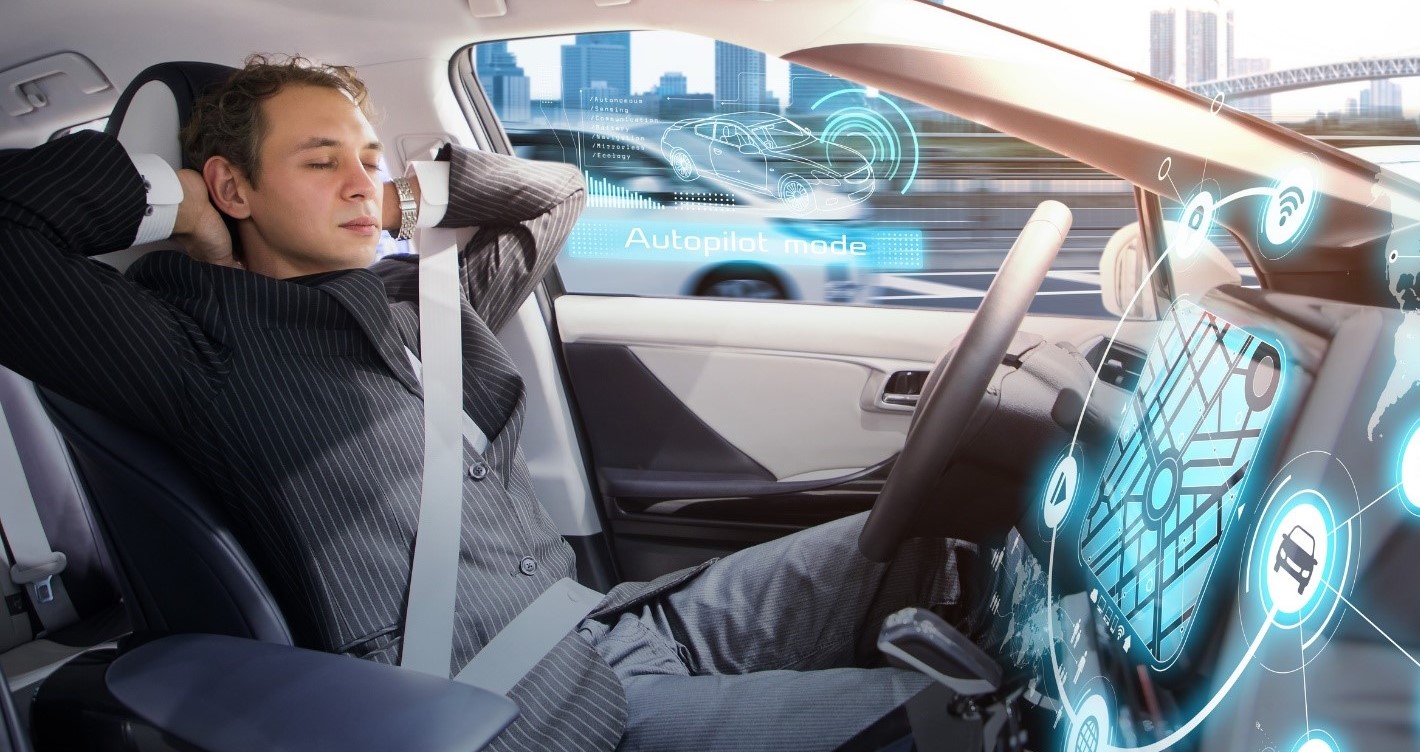 OSCCAR is an expert consortium that earns its existence because of the high complexity of the problems that autonomous vehicles pose to designers and manufactures. Furthermore, many rapidly improving technologies in the AV domain require agreed frameworks and standardization. To cover all subject areas the consortium is very large. To get an idea of the complexities of the problems that OSCCAR is dealing with, we can look at the areas covered in the consortium’s project objectives:

Future Accident Scenarios is an interesting area of development. In the past, authorities have used Simcenter Madymo in forensic investigations, which includes using it for evidence in criminal investigations. In this particular research objective we did not take a lead role.

Advances in occupant protection. Researchers will take advantage of Madymo’s speed to setup and run, such that future protection principles can be assessed early in the design phase and optimized using Design of Experiment (DoE) investigations.

Integrated Virtual Assessment Frameworks and Standardization of Virtual Testing Procedures are carefully implemented. The researchers in OSCCAR complete this objective by utilizing our technological capability, experienced engineers and researchers, which helps to define frameworks that the industry can agree upon.

Implementing Virtual Testing Methods. Simcenter Madymo will supply a simulation software package to conduct tests and provide feedback from experts in the domain.

However, our main contribution to the project is the supply and further development of diverse, omnidirectional, biofidelic, active human models.

Not too far in the past, all safety systems were passive. A passive safety system mitigates the damage done in a crash but does not take active preventive action to avoid it. Passive safety systems only required regulation tests consisting of predefined crash scenarios, with known impactors at defined velocities. To complete these tests, it was possible to use anthropomorphic test devices (ATD). These devices behave more like the dead than the living (i.e. a crash test dummy, shown in Figure 1). We could use physical dummies because the passive safety system crash scenarios were only investigated from the moment of impact. Therefore, any possible response time would only be a fraction of a second. Plus, it would be subjected to very high accelerations. In such short and fast cases, human response is not a factor.

In the future, autonomous vehicles must be able to anticipate crash situations and act before the event to avoid or mitigate the crash. When predicting a crash event ahead of time the entire modeled crash scenario is much longer. The occupant’s reaction prior to the crash may affect their position at the moment of impact (known as out-of-position). Further, it can affect the ability of the restraint systems to protect them. Consequently, a Human Model used to replicate a crash will require an active reaction to stimuli. The longer the crash scenario lasts, the greater the number of possibilities there are for the type and direction of the stimuli. As a result, it is required to use a more advanced omnidirectional active human model.

Past data has shown that on average males drive more miles than females. They are also crash more often. By protecting them engineers were protecting the largest cohort of people they could. Most of the early research that was completed in the 40s and 50s was done by the military that consisted predominantly of men. The data collected was therefore only relevant to comparatively young, fit, but otherwise average-sized 1940’s males. In addition, more men donate their bodies to science than women. So, when investigating the motion of a human, in a high impact scenario, using male data is both easier. It also has the potential to save the most lives.

Having mostly male data has had a consequence. It means that they modeled almost all the crash test dummies and computerized human model simulation tools based on men. Additionally, the current safety systems in cars protect men best. Engineers have been so successful at tuning their models, that the average belt restrained female is 47% more likely to be severely injured than a male in a comparable crash. This is fantastic if you are an average sized male. It is bad news for the rest of us who do not fit that criteria. Clearly there is a need to collect data on other populations to create a diverse range of biofidelic models.

By working with a large group of expert partners the OSCCAR project has been able to simultaneously investigate many subject areas within autonomous driving; from mushroom airbags to swivel seats. Some of these investigations the Simcenter Madymo team will look into in the future. Other investigations have a more direct impact on the development of Simcenter Madymo models and software packages.

To continue the phased evolution of models for the future, a safety software developer first needs to understand the requirements of the next generation of models. To this end, working with OSCCAR helps the Madymo development team to answer several questions. If the occupant is not driving, what are they doing and does this affect their reaction? Will people want to sit in a configuration that is akin to cars of today? Would they prefer to face each other? What is more useful to automotive manufacturers; a definitive injury type and location or the risk that an injury would occur? How will the vehicles of the future be used? As a private vehicle, private hire, or in a more ad hoc manner?

All these questions and many more complicate and entangle the requirements of the next generation of human models. Fortunately, OSCCAR has already started to get some answers that will help Siemens produce the best and most relevant next generation of models.

Researchers hypothesized that in future autonomous cars, occupants would sit in a variety of positions and tried to investigate what these may be. Perhaps they found that people who suffer from motion sickness preferred to sit facing the direction of travel. While those that did not suffer this affliction were more accepting of rotated seating positions. Data shows that participants are more accepting of a 30-degree seat rotation to the left than to the right.

The preference for a left orientation is not fully understood. The route driven included 2 different designs of a traffic circle, these could have contributed to a different inertia effects for the occupant, one may have favored the left side, and the other the right. The difference seen could equally be due to the characteristics of the participants. Such as right leg dominance that may have increased the likelihood that participants favor one side over the other. The researchers concluded that the occupants field of view may be a factor in how they score sideward seating positions. You could suggest that the trees quickly passing by may have added to the discomfort. If visual cues have such high importance for comfort, will manufacturers or certification organizations need to create a model for testing comfort that can monitor different types of visual cues?

Researchers have found that rotating the seat so that the occupant has a more inward-facing position significantly changes the kinematics during a crash. In a lateral impact, current safety systems lose their effectiveness and belt -neck interaction can become dangerous. While, during a frontal impact, a rotated seat can result in increased Neck Injury Criteria, neck moments, and neck displacements. The belt interaction is attributing to these increases. To overcome this, a belt integrated into the seat concept has been investigated as well as actively rotating seats to reposition the occupant prior to the crash. The Madymo team has recently demonstrated in a Webinar on how to run a DoE of such tests.

Swivel seats and new belt concepts raise a number of issues for researchers to investigate. Rotating an occupant too fast can induce a brain injury prior to the crash happening. You need to have a set of recommendations that define the appropriate pre-crash seat angular accelerations in order to position the occupant in the optimum position. To do this, you need to prepare many similar tests in a DoE simulation study. Simcenter Madymo has a built in DoE setup tool, which allows the user to run all their required tests with only a single command. The team have presented the results to OSCCAR and the wider research community.

Rotating the seat pan (the part of the seat you sit on) or the backrest are two ways that you can change the seat position by rotating a section of the seat around a horizontal axis. Like seat rotations previously mentioned, the restraint systems work best when the occupant is in the right position. This is the position that the restraint system is originally designed for. It is a task within OSCCAR to investigate the best methods of returning the occupant to this position or redesigning the restraints to compensate for the out-of-position situation. They will then set guidelines for making these changes safely.

Within OSCCAR there is a subgroup of which Siemens is a member. This group is looking at the latest research into the phenomenon of submarining. Submarining was first defined in the 1970s as “the lap belt sliding over the iliac crest [top of the hip bone] with lap belt forces affecting the internal abdominal organs during the forward displacement of the lower torso.” It is known that rotating your hip position increases the risk of submarining. Further, the shoulder belt can slip and problems with neck contact can ensue. Both issues are heightened by the visibly different anatomy of males and females of the same size. Particularly with regard to the bones of the hip region. The difference in anatomy can mean that what is suitable for one population is not so favorable for others, making the restrain design much more complicated. We created this group to investigate how we can improve restraints and human models to better serve a larger proportion of occupants in a wider range of seating and restraint configurations. Madymo and the other partners will use this study to improve their models ability to predict submarining.

The implementation of virtual testing methods

It is a core goal of OSCCAR to make recommendations for the substantial use of virtual testing in complex testing scenarios to support and/or replace hardware crash tests in the future. This will include a large collision matrix and testing process for both crash and pre-crash parameters. Regulatory and consumer tests still need to agreed on this. Siemens will align the Simcenter Madymo products with these tests, so that users can continue to use the most complete set of dummy and human models available to attain the highest quality results in the shortest possible time.

Siemens has authored this article. Although aligned with OSCCAR, it does not mean to represent the OSCCAR opinion as a whole or any of its individual parties. The author has made a reasonable attempt to provide an accurate account of the research, but the reader should consult the original work and/ or the original author for concise and up to date information.

OSCCAR has received funding from the European Union’s Horizon 2020 research and innovation programme under grant agreement No 768947.

Any dissemination of results reflects only the author’s view only, the Agency is not responsible for any use that may be made of the information it contains

Continuous Automotive Test Innovation within Simcenter… November 26, 2021 Simcenter Madymo road scene Siemens Simcenter Madymo has been awarded the ‘Crash Test Innovation of the Year’ for 2021 by…
4 Myths about AI in CFD April 6, 2021 As Artificial Intelligence (AI) has become more ubiquitous in our everyday lives, so too has confusion about what it is…
Model-based design from ICEs to ICUs: Bridging the… November 10, 2021 The events of the past few years have turned global attention towards health and, more specifically, healthcare. From the images…
This article first appeared on the Siemens Digital Industries Software blog at https://blogs.sw.siemens.com/simcenter/autonomous-vehicles-enter-a-validated-future/