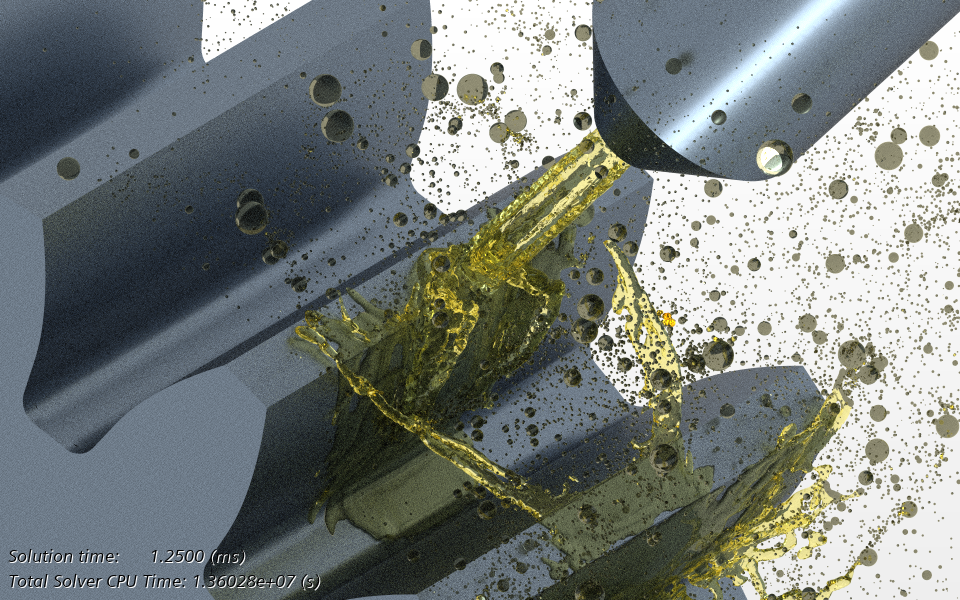 Something has been digging up our lawn. Every meter or so there is a hole. I remember now that this always happens at this time of year. This particular something is actually an army of somethings – squirrels. We have a walnut tree in our garden which must yield a sizable crop of walnuts. I say “must” because we have never managed to collect a single nut in all the years we have lived here. The squirrels head up the tree in droves stripping the branches bare like arboreal piranhas, getting into quarrels over their pickings. Once down, they bury their nuts in the lawn and everywhere else. I could live with that, but the worse bit is that come next spring I know they will be lucky to remember where 10% of those nuts are. All the effort of collecting them just to lose them!

Resolve small thousands of tiny droplets with VOF? This is nuts!

We human CFD engineers may have more in common with the squirrels on my lawn than you think! We have a similar problem, particularly those of us who carry out VOF free surface simulations. In such simulations we are resolving large bodies of fluid, but in many applications these large bodies of fluid break-up into smaller and smaller droplets, and often these droplets form an important part of the physics that we cannot neglect. For example, fuel sprays where atomization is important, or gearbox churning where droplets are flying in every direction moving oil to where it is needed.

However, our computational budgets are limited and all too often we spend great effort resolving the formation of these droplets in the near field only to lose them into a numerical mixture in the bulk flow. Like the industrious squirrels, our efforts are then wasted as these droplets are then lost for good.

All is not lost however! In this October’s release of Simcenter STAR-CCM+ 2020.3, we have introduced an exciting new feature that allows you to bank your efforts without losing them later. It enables you to predict droplet formation with large bodies of fluid breaking up into Volume Of Fluid (VOF) blobs, but to still track those droplets wherever they go, however coarse the mesh in those regions. Enter the VOF to Lagrangian resolved transition model. The latest addition to hybrid multiphase modeling!

The VOF to Lagrangian Multiphase (LMP) resolved transition model is a new phase interaction model that allows you to resolve large details of your multiphase simulation using VOF and smaller details with LMP. This approach brings with it affordable accuracy allowing you to capture flow features in great detail without having to resolve everything with VOF CFD simulation.

Let’s illustrate this with an example: a simple fountain.

In this example, the jet and primary break-up is modeled using VOF CFD simulation. To keep the computational cost to a minimum, Adaptive Mesh Refinement (AMR) is used to track the free surface (this is not compulsory but advised where possible).

Behind the scenes, the VOF blob detection model is busy identifying contiguous blobs of VOF fluid – candidates for conversion to LMP droplets. To use the new model, you specify criteria for conversion based on properties such as blob size and/or zonal considerations. In our example this is done based on droplet size and results in the red Lagrangian droplets. To bridge the gap in scales between resolved VOF and unresolved Lagrangian, the cell clustering model is used. This allows the Lagrangian droplets to appear in regions where the mesh has been previously refined for VOF. Once VOF droplets are removed, AMR (if active) will coarsen out the mesh, or if a zonal approach is used the LMP droplets will move into areas of coarse mesh.

This approach saves computational cost compared to the equivalent VOF CFD simulation where the droplets are fully resolved.

The new phase interaction can reduce the computational expense of capturing and tracking every droplet as a VOF blob, but often such droplets are initially captured but then lost given the mesh resolution available along their path. In such cases the VOF to LMP resolved transition model allows you to capture more detail and ensure that these hard-won droplets are not lost, allowing us not to befall the same fate as our friends the squirrels.

OK – let’s look at something more industrial, this time the oil lubrication of gears. This is an example we have seen before when AMR was first released, but now we can tackle it even more efficiently. In this example a jet of oil hitting a rotating gear and breaking up into smaller droplets. Here we will compare a pure VOF CFD simulation with AMR with the equivalent simulation with VOF to Lagrangian resolved transition.

As we can see in the animations, both the pure VOF and the hybrid VOF-LMP show similar flow and droplet patterns, but the hybrid VOF-LMP example captures much more detail of the splashed droplets and therefore gives a more accurate distribution of the splashed mass which otherwise would be lost as a numerical mixture in VOF CFD. Comparing the runtime, retaining all of these droplets costs 25% more CPU time in this example. These results show that we are able to capture more detail at relatively little cost or a similar level of detail at a lower cost, shifting the curve of accuracy versus cost to give affordable accuracy.

Well hold on there, I hear you say, more detail does not necessarily equal more accuracy. With that in mind we should look at a validation case. The example we shall look at is a jet in a crossflow [1]. In this example, the fuel jet exits the nozzle with a velocity of 31 m/s into a crossflow of air at 148 m/s. As in the previous example the primary jet breakup is resolved with VOF and then droplets below a specified size are transitioned to Lagrangian. Secondary breakup of the Lagrangian droplets can also be modeled.

In the animation we can see how the jet develops and breaks up and the cloud of Lagrangian droplets that develop together with the subsequent breakup. To capture this level of detail with resolved VOF CFD simulation would be impractical. Once an equilibrium state is achieved, the droplet size distribution data is collected and averaged over a window of time using the parcel data mapper. Comparing the predicted droplet size and velocity distributions below, the trends of the experiment are picked up nicely without having to capture everything with VOF.

VOF to Lagrangian resolved transition is the latest capability in hybrid multiphase in Simcenter STAR-CCM+. As part of that capability, let’s see how it can be used with some of the rest of the hybrid multiphase toolset. The trio of models most commonly used are VOF, Lagrangian, and Fluid Film. These models can be used in combination, with Lagrangian and Fluid Film acting as sub-grid models to VOF allowing the user to resolve the larger scales with VOF based on the available budget, while including models for the smaller scales – analogous to hybrid turbulence modeling.

Now to our final example of e-machine cooling…

In this case, oil jets are aimed at the machine windings ultimately break-up into lots of small droplets which fly around the machine. We need to predict this correctly to get the oil distribution right. So how do we model this – well, the various phase interactions are shown below.

The incoming oil jets are modeled as VOF. Then on impinging, the oil forms a thin film on the windings. This would be very expensive to model with VOF and so the hybrid VOF-Film (resolved film) model is used. This allows us to transition the incoming oil to Fluid Film where the mesh is too coarse to resolve it. The film then strips Lagrangian droplets which are shown in the animation as red droplets. The film is not the only source of droplets in this simulation, there are larger blobs of fluid captured by the VOF directly that breakup into smaller droplets away from the film that we could then model with Lagrangian.

The new resolved VOF-LMP transition model allows us to do this, these are shown as the blue droplets in the animation. These droplets (both blue and red) can then re-impinge into the VOF and the film. Including all these hybrid phase interactions allows us to make an otherwise unaffordable simulation affordable, whilst at the same time correctly capturing the transport of oil by ballistic droplets around the motor. These droplets move at a very different velocity to the surrounding airflow making Lagrangian the best modeling strategy to use.

Hey squirrels, we have affordable accuracy! This is nuts, right?

This brings us to the end of my blog, and I hope you are as excited as I am to try this new feature. Learn from the squirrels’ misfortune, bank your hard work in resolving VOF breakup. Resolve what you can and model what you can’t with hybrid multiphase and the VOF to Lagrangian resolved transition model. Bringing you affordable accuracy this fall in Simcenter STAR-CCM+.

You can(’t) leave your head on. Headless Horseman leverages… October 31, 2022 How much greener can a Headless Horseman truly become without a fake pumpkin head? Aerodynamics CFD will reveal the answer
It’s World Oceans Day. Underwater Basil, anyone? June 7, 2022 Today is World Oceans Day. Why not celebrate with something sustainable from the ocean – like underwater basil. World Oceans…
Robots? Not in my backyard! October 11, 2022 Discrete Element Method (DEM) Simulation enable engineers to simulate fibers and bulk material fast and accurate.

One thought about “Affordable Accuracy – VOF to Lagrangian Resolved Transition”

This article first appeared on the Siemens Digital Industries Software blog at https://blogs.sw.siemens.com/simcenter/affordable-accuracy-vof-to-lagrangian-resolved-transition/