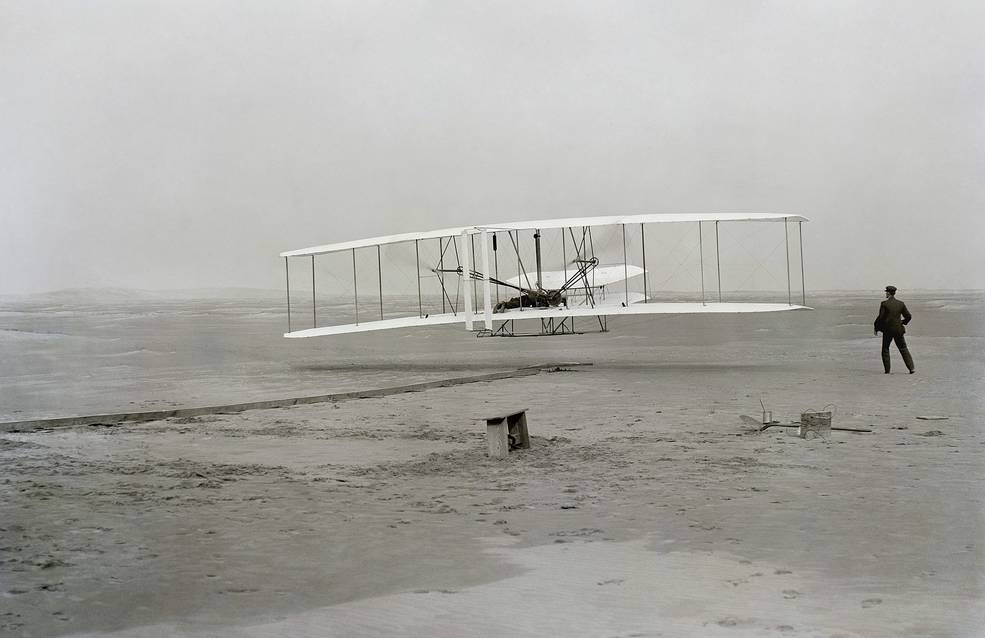 119 years ago this weekend, Wilbur and Orville Wright made history at Kitty Hawk, North Carolina. Located on a series of barrier islands called the Outer Banks, it is the 6th windiest place in the USA. A likely location for the Wright brothers and their first successful airplane flights on December 17, 1903. But what one tends to forget is that this first flight didn’t happen overnight. From their beach camp at Kitty Hawk and back home in Dayton, Ohio, the Wright brothers had been experimenting and adapting their flyers for more than four years

The two brothers, Wilbur and Orville Wright, were self-taught engineers and bicycle shop owners from Dayton, Ohio. They were obsessed with the idea of “piloted” flight. They designed and built early prototype gliders that they attempted to fly in 1900 and 1901 in Kitty Hawk. Wilbur Wright eventually glided about 100 meters in 1901, but the brothers knew their early prototype was still unpredictable and some of the data they had gathered seemed to be invalid. Disappointed yet still full of faith, they returned home to Dayton and built a wind tunnel to obtain new data and update the flyer design

In 1902, they returned to the Kitty Hawk camp and the 1902 Wright Flyer completed 600 glides. The brothers were convinced they had graduated from unpredictable glider to working airplane. The 1903 version would feature breakthrough innovation with a lightweight engine and original propeller design.

The 1903 Wright Flyer was heavier than expected, weighing in at 275 kg. This was five times heavier than the 1902 version and the brothers weren’t sure the engine would be powerful enough to lift the plane off the ground. This is when they came up with the idea of the launching rail system, which gave the plane enough momentum to take off. (Prior to this, helpers from the Kitty Hawk camp just ran carrying the wings of the much lighter gliders to launch them into the air.)

Wilbur and Orville Wright made history

On December 17th, 1903, at precisely 10:35 am, Wilbur and Orville Wright made history. Orville Wright lifted off from the launching rail at Kitty Hawk and flew for 12 seconds at an altitude of 8 feet, landing 120 feet away. The Wright Flyer hit a top speed of 6.8 mph with 34 mph winds. With both brothers piloting, they completed three more flights that day, reaching 852 feet in 59 seconds and a top altitude of 10 feet.

Some food for thought

Early aviation pioneers Wilbur and Orville Wright did not put wheels on their first plane, the 1903 Wright Flyer. The famous 12-second flight that took off on December 17th, 1903 from the beach in Kitty Hawk, North Carolina started by launching the flyer into the air using a rail system. The self-taught engineers didn’t use wheels or landing gear because, logically, they were taking off and landing in deep sand. Wheels would be problematic, to say the least.

Constructed with spruce wooden frames, unbleached muslin fabric and honestly heaps of tenacity, sheer grit and dreams, the first Wright brothers’ planes were all about getting off the ground and into “piloted” flight. Wheels were either for catapulting the early flyers into the air or for moving the Wright Flyers around on the ground. Only around 1910 did the Wright brothers’ planes, the Military Flyer and the Model AB, feature wheels.

But back to wheels and that 1903 flyer. The 1903 Wright Flyer’s wheels were actually attached to the rail system itself. The wheels, which the brothers constructed from recuperated bicycle hubs, were part of the dolly on the launch rail track, not the airplane. The wheels ran on a rail, in reality, an 18-meter wooden track running through the sand that launched the Wright Flyers into “flight”. A later model, the 1906 Wright Flyer, had wheels as well, but they were removable and only used to the roll the aircraft from one spot to the other. They were removed before taking off on the track.

Almost 120 years later, we have come a long way since removable landing gear and catapulting flight tracks. Think about this. At Kitty Hawk, the first Wright Flyer weighed only 275 kilograms without the pilot, who by the way, flew in a prone position. Today, a big bird like a fully loaded Airbus A380 weighs in around a whopping 575,000 kilograms. As you can guess, the landing gear on an A380 or similar aircraft is far from recuperated bicycle hubs and home-made rail systems.

Read the full story about how far we have come in the world of landing gear in the this issue of Engineer Innovation.

For more about Kitty Hawk and the Wright brothers: https://www.nps.gov/articles/roadtofirstflight.htm

Images courtesy of the Library of Congress (USA).

Surfboard CFD - Riding the Digital Wave July 29, 2022 The flip-flop engineering symposium Monday, December 9, 2019, 7 pm. Sunset Beach Elementary School Cafeteria, Oahu's North Shore, Hawaii. Two…
4 Myths about AI in CFD April 6, 2021 As Artificial Intelligence (AI) has become more ubiquitous in our everyday lives, so too has confusion about what it is…
Model-based design from ICEs to ICUs: Bridging the… November 10, 2021 The events of the past few years have turned global attention towards health and, more specifically, healthcare. From the images…

This article first appeared on the Siemens Digital Industries Software blog at https://blogs.sw.siemens.com/simcenter/118-years-ago-wilbur-and-orville-wright-made-history/