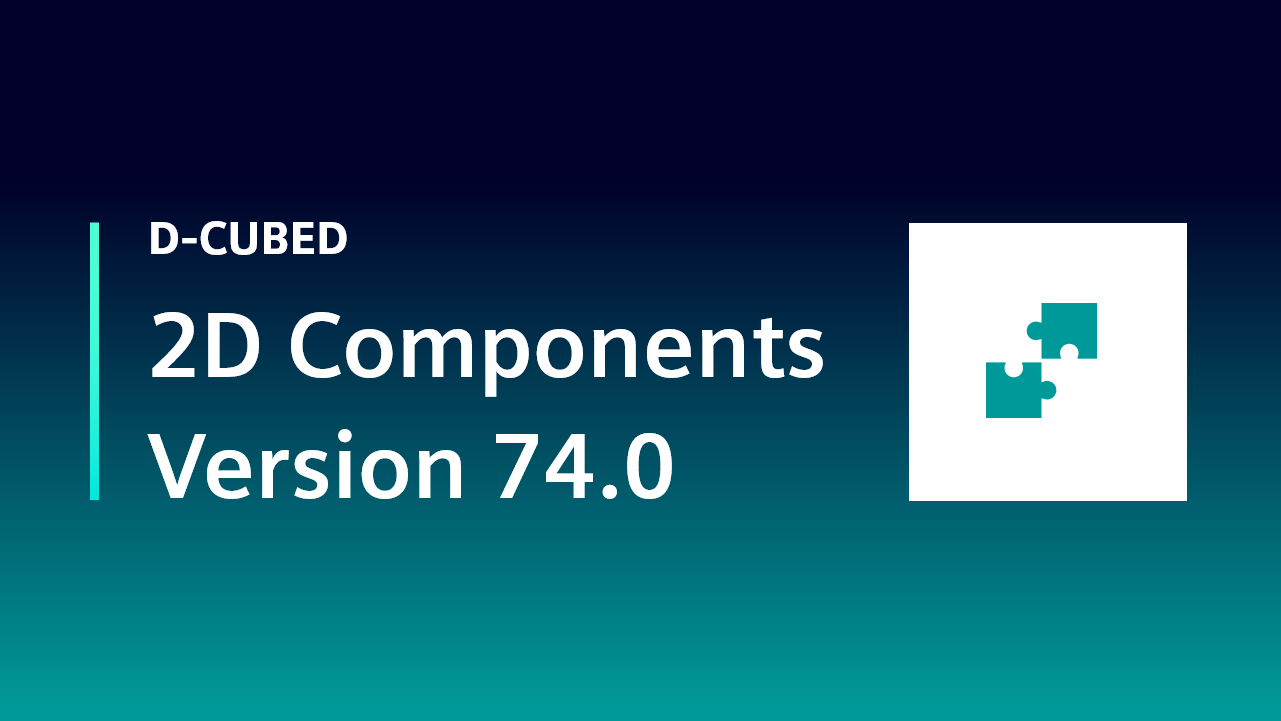 D-Cubed 2D components are integrated by software developers to add functionality to the sketching environment of CAD/CAM/CAE and AEC software applications. These applications are used to design, analyze, visualize, and manufacture products from consumer goods to aircraft engines and commercial buildings.

D-Cubed 2D DCM (2D Dimensional Constraint Manager) is widely acknowledged as the leading 2D geometric constraint solver. In addition to driving the sketcher in many CAD products, 2D DCM is used in CAM, CAE and other geometry-based applications. Enhancements introduced in version 74.0 of D-Cubed 2D DCM are described below.

Changes to a parametric sketch can be driven by modifying the values of dimensions – distances, angles and radii for example. In models where a dimension cannot be modified and solved independently of another dimension, 2D DCM will mark the model as over-defined, even if the current values of the dimensions are consistent (see example below). In cases where such dimension values are known to be fixed, these can be classified as a rigid dimensions, enabling 2D DCM to solve the model.

Version 74 more strictly controls the situations where the value of a rigid dimension may be changed to improve the reliability of the solving process.

2D DCM allows an application to associate text labels to geometry, dimensions, constraints and other entities, storing them within the solver. This is a useful debugging feature, helping to identify elements or groups of elements in a model.

New rules for the content of text labels have been introduced in version 74 improving the reliability of using this feature.

Delete all entities in 2D DCM with a single function call

Version 74 introduces a new interface function that simplifies the process of removing all geometries, dimensions, constraints and other entities from an instance of 2D DCM without destroying it. Previously, the only option to restart a modelling session was to delete each node individually or to delete the whole 2D DCM instance and create a new one. The new function allows the application to persist the instance, including global option values, while deleting all entities in a single call.

D-Cubed PGM (Profile Geometry Manager) enhances the productivity of sketchers. It does this by working with higher level geometric data and not individual curves. Examples include offsetting loops while inserting, extending and trimming edges, adding constraints to loops rather than to individual curves, and solving the shape of loops while maintaining their perimeter length or area. PGM is often used to add capabilities to a 2D DCM-based sketcher. Enhancements introduced in version 74.0 of D-Cubed PGM (Profile Geometry Manager) are described below.

Version 74 of PGM (when used with 2D DCM) more strictly controls the situations where the value of a rigid offset distance can be changed, thus improving the reliability of the solving process (see related 2D DCM enhancement above for details).

Similarly to 2D DCM, new rules for the content of text labels have been introduced in version 74 of PGM improving the reliability of using this feature.

Delete all entities in PGM with a single function call

The new function in 2D DCM version 74 also simplifies the process of removing all geometries, dimensions and constraints from an associated instance of PGM without destroying it.

Certain offsets, for example of spline curves, are handled using an offset curve type. A new function has been introduced in version 74 returning details of an offset curve that enables an application to better handle such curves.

When using PGM with 2D DCM, consistency of solving has been improved in cases where the endpoints of parametric curves are coincident to the curve geometry.

This article first appeared on the Siemens Digital Industries Software blog at https://blogs.sw.siemens.com/plm-components/d-cubed-2d-components-v74-release/