As lore has it, about 100 years ago Henry Ford quipped that a “customer can have a car painted any color he wants as long as it’s black.” Of course it didn’t take long for the car to become a manifestation of individual tastes and preferences, a trend that arguably started relatively soon after Ford’s remarks with GM’s brand hierarchy and has continued to accelerate ever since. Indeed monochromatic design is now a useful straw man to lampoon, at least based on Kia’s Super Bowl commercial.

Today personalization goes way beyond things like color and cockpit fit-and-finish to include more and more about the in-car experience, which in turn requires building cars with increasingly complex electronics.

Customers on the lot expect to be able to choose from an array of options related to comfort, performance and safety — most of which are tied to sophisticated hardware/software design domains. Then there is the demand to access all the connected devices and apps that for better or worse are so much a part of life everywhere else. User profiles already are part of many high end cars and Apple made news a few years back with a patent filing for a system that would allow user configuration profiles for seat, steering wheel and mirror positions to be stored on a iPhone and used on any car that has the appropriate system to sync, presumably via CarPlay. 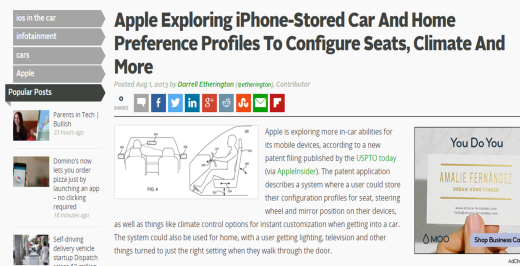 Consider the host of design implications that come with the emergence of personalization as a point of differentiation for automakers. One is the task of securely moving data to and from the cloud, especially with the push toward over-the-air (OTA) software updates. Tesla is the prime example here and is routinely (and rightly) celebrated for its software-driven approach, which includes a rapid release cycle that would be anathema to traditional manufacturers.

A few months ago Tesla made news by pushing its Autopilot software out via an OTA update, “effectively making tens of thousands of cars already sold to customers way better,” reported Wired’s Molly McHugh. The update, Tesla 7.0, included lane-departure warnings, automated lane changing, radar controlled cruise control and on-command parallel parking — in effect squeezing more from the existing camera, ultrasonic sensor, radar and GPS hardware. Next came Tesla 7.1 in early 2016 with its Summon feature, already YouTube-famous. (And it’s not just a novelty. In a blog announcing 7.1 Tesla pointed out that between 2008 and 2011, 900 people were killed and another 52,000 injured by vehicles backing up, just in the United States.)

A second more prosaic though undeniably important design consideration has to do with electrical systems that support personalization. As a thought experiment, you could imagine that if price, weight and fuel economy were not considerations, then it might be possible for every car to include a sufficiently robust and complex wiring harness to meet any customer whim. However in reality, these considerations have long been of central concern to most manufacturers, and likely will be for the foreseeable future. (Incidentally this is surely one reason why “10 Ways to Make Wiring & Harness Designs Faster & Better” remains among our most downloaded automotive whitepapers, even though it was published in 2012.)

Systems engineering and automated design tools are needed to manage tradeoffs and find the optimum number of configurations. A handful of premium European carmakers are already offering wire harnesses tailor made to customer specifications. An example is the BMW 1 series and its approximately 50 million different configurations, which according to one droll BMW copywriter means “increasing the logistical complexity of production.” I should say so!

Inevitably, managing systems engineering is an end-to-end problem, one that starts with the earliest stages of architectural definition and goes right through all the stages of design and manufacturing. And don’t forget the dealer service centers and independent maintenance shops that often need to know precise electrical architecture to diagnose hidden problems, a major challenge if eventually the electrical innards of every car will be unique.

The bottom line is that personalization brings with it a tangle of under-the-hood complexity that OEMs, tier 1s and other suppliers are working to solve. The automotive industry is transitioning to one that offers unique mobility solutions that simultaneously encapsulate the best of connected consumer electronics and IoT nodes while still hewing to tenets Henry Ford himself would recognize — the mass production of zero-defect, functionally safe, precision-engineered cars.

Who knows, maybe they’ll even come in black.

Andy Macleod is director of automotive marketing at Mentor Graphics. His last blog, “The Road to Electronics Consolidation in the Vehicle,” was published March X, 2016. He lives in Austin, Texas.
Read more on Mentor Automotive Solutions

This article first appeared on the Siemens Digital Industries Software blog at https://blogs.sw.siemens.com/automotive-transportation/2016/04/15/a-car-tailor-made-for-you-that-would-still-make-henry-ford-happy/