[SPOILER ALERT] I suspect virtually all Verification Horizons blog readers have seen Star Wars: The Force Awakens by now, but be advised that this post has a minor spoiler. 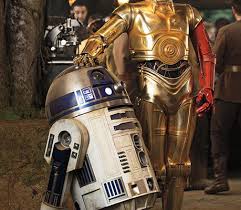 In the latest installment of the venerable Star Wars series, upon command from another droid the famous R2-D2 comes out of a multi-year hibernation to share some important data. Hence, R2-D2’s designers clearly needed to employ similar low power design and verification techniques faced by systems and SoC designers here in our own galaxy. Indeed, in the Internet of Things (IoT) realm, there is a growing category of devices that are specified to last for at least 10 years without an external, wired power source or recharge (e.g. remote or hard-to-reach sensors). Hence, it is instructive to consider the challenges behind creating an astromech droid that can remain dormant for 15 or more years until the specified reactivation signal is detected.

* First, given the wide range of a droid’s operating environments, R2’s designers could not assume that the droid would have access to a power source after going into “dormant mode”.

* This requirement drives the selection of an energy supply that decays very slowly over a long time so when the system comes out of dormancy there will be enough power to boot back up and resume operation. Spacecraft designers in our galaxy favor radioisotope thermoelectric generators, and surprisingly “In the past, small ‘plutonium cells’ (very small 238Pu-powered RTGs) were used in implanted heart pacemakers to ensure a very long ‘battery life’. As of 2004, about 90 were still in use.” Hence, it is plausible to assume that R2-D2 is powered by something similar.

* To minimize the power consumed during dormancy, one can further assume R2’s circuits use power shutoff techniques familiar to designers here on Earth. Indeed, in order to endure a really, really long dormancy period the droid must completely power down. Consequently, it is logical to surmise that the “front end” of R2-D2’s wireless interface is some sort of energy harvesting RFID-like receiver — when an authorized person/droid approaches R2-D2, he/she/it could send an energetic activation pulse that would literally-jump start this circuit, which would in-turn activate the larger system.

* In addition to supporting long term dormancy, one can imagine R2-D2’s SoCs employ several other low power design techniques to support the wide range of R2’s accessories and sensors when the droid is in regular use. For example, R2 certainly must employ multiple supply voltages for its higher power features such as the head-rotation and wheel motors, holo projector, and its various manipulator arms. Other methods like clock gating and dynamic voltage frequency scaling surely come into play during “snooze” modes of operation when transiting from base to the battle space, with the system becoming completely awake when the host spacecraft’s pilot begins to approach the target area.

* Finally, verifying the low power behaviors of such a complex system would be substantially simplified by using the “successive refinement” methodology, with the low power architecture captured in the intergalactic IEEE 1801-2015 (a/k/a UPF) standard. Functional verification would proceed using testbenches that follow the Universal Verification Methodology (UVM) driving numerous power-aware simulations, which in turn would be orchestrated by sophisticated verification management tools. These simulations would be complemented by exhaustive formal analysis of critical IPs and sub-systems, with the functional coverage results from simulation and formal merged together into a single, industry-standard Unified Coverage DataBase (UCDB) by the aforementioned verification management tool. Additionally, R2-D2 must employ numerous independent clock domains for all of its internal circuitry and accessories. Hence, undoubtedly power-aware clock-domain crossing verification (CDC) was a design sign-off criteria for R2’s designers.

Do you agree?  What other low power design & verification techniques are required for such long lived systems here on Earth, in our solar system, or in a galaxy far, far away? Please share your thoughts in the comments below, or contact me offline.

Until next time, may the force be with you!

The September Verification Horizons is Now Online! September 2, 2021 I'm really excited to share with you a very special issue of the Verification Horizons newsletter for September, 2021. The…
Leave the House With a Clean Design September 14, 2021 Wouldn't it be great if there were something that would stop you from leaving the house wearing mismatched clothes -…
PCIe® Gen6 verification - the PCI Express® generation comes… May 20, 2021 Billions of us today – regardless of which Generation we belong to, Gen-X, Gen-Z, Millenials, Generation-Alpha – use PCI Express®…

One thought about “R2-D2 and Ultra Low Power Design & Verification”

This article first appeared on the Siemens Digital Industries Software blog at https://blogs.sw.siemens.com/verificationhorizons/2016/01/19/r2-d2-and-ultra-low-power-design-verification/