In the nearly 6 months since this version of the standard has been available about 7,000 copies have been downloaded under the IEEE Get program.

The previous version was also made available for free download and was just as popular as this version of the standard is. 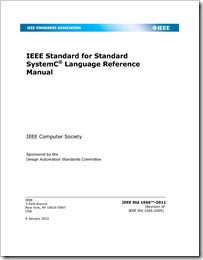 While the approved standard was being made ready for publication, Accellera Systems Initiative was also busy completing the open-source proof-of-concept library.  After taking comments and feedback from a public review process, version 2.3.0 of the library was completed and is now available.

IEEE 1666-2011 added a number of important new features, including support for transaction-level modeling (TLM) that has proven to be an important element to enable high-level design and is a key component upon which the Universal Verification Methodology (UVM) is built from.

For those who want to used the SystemC library directly, it is now available for wide industry access.

The downloads from the IEEE and Accellera Systems Initiative will require some license agreement approvals.  The links are not one-click access to the material below.

November Issue of Verification Horizons is Out! October 29, 2020 Now that we're well into autumn, it's time for our November issue of Verification Horizons. As always, we have a…
PCIe® Gen6 verification - the PCI Express® generation comes… May 20, 2021 Billions of us today – regardless of which Generation we belong to, Gen-X, Gen-Z, Millenials, Generation-Alpha – use PCI Express®…
Clearing the Fog of ISO 26262 Tool Qualification April 13, 2022 Developing products to the ISO 26262 standard requires many activities across multiple disciplines. One of those activities is ensuring the…

This article first appeared on the Siemens Digital Industries Software blog at https://blogs.sw.siemens.com/verificationhorizons/2012/07/16/systemc-standardization-cycle-completes/