OK, maybe it is not the Dawning of the Age of Aquarius, but Wally Rhines’ DVCon 2011 keynote did have a slide titled “SystemVerilog in the Ascendancy.”  It is not a word I see or use much.  In fact, Google labs’ “Book Ngram Viewer” shows ascendancy has been in decline since around 1825.

It struck me that the title was tending towards the allegoric, if not mostly there, due to it conjuring possible metaphoric, astrological meaning as I began to wonder if planetary positioning was going to be offered on the next slide to bolster SystemVerilog’s ascendancy.  I asked myself: Is SystemVerilog’s “ascendancy” a move to a new spiritual level?  Has it transcended all other languages to garner greater social importance for design and verification?  Is this a greater representation of another trends?  Or, perhaps, I was having a flashback to the hippie era.  After all, I was hearing in my mind that Hair song with the phrase

But I was too young in the hippie era of 1967 to have a real flashback.  And Wally’s keynote was not some hippie mumbo jumbo.  I am also more than certain any of the engineers in the room at DVCon with some physics background could tell us Jupiter aligns with Mars several times a year and the few who might have astrological training (I’ve got to meet them!) could share with us the Moon is in the 7th House for about two hours every day. 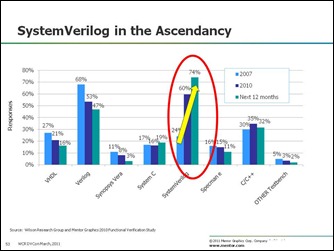 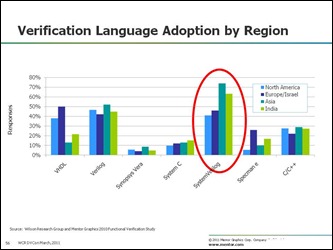 Wally also discussed the adoption of languages by geography.  SystemVerilog has a strong global presence with particular strength in Asia and India.  The “e” language shows focused geographic use in Europe/Israel followed by India.  VHDL’s use also has focused geographic use with Europe/Israel leading followed by North America.  It is interesting to note some languages have broad global appeal while others have only regional adoption.

Wally also touched on the adoption trends in testbench base-class libraries.  Accellera’s UVM shows the largest growth from 2010 use to predicted use in 2011.  It should grow from 7% to 27% in the next 12 months.  While many projects adopted UVM’s progenitor, OVM, there appears to be no let up in use of OVM either over the next 12 months.  In fact, there is some small growth predicted from 42% to 47%.  Ongoing projects are the most probable reason that the OVM transition to UVM does not appear to start in the next 12 months.  One can postulate that once projects end, teams can consider a transition from OVM to UVM.  What it means to Mentor, OVM support is going to be critical for customer success for some time. 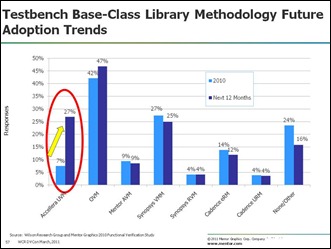 What is declining?  “Other methodologies,” such as in-house or homebrew drop fastest as the last holdouts adopt the Accellera industry standard.  All the other methodologies show small declines in the coming year.

The survey results Wally shared confirm the world is tending towards dominant use of IEEE Std. 1800™ (SystemVerilog) and Accellera UVM™.   If the world is aligning on these standards, can we predict the standards wars are over?  Looks like another Hair musical flashback:

Then peace will guide the planets.
And love will steer the stars

There are more survey results in Wally’s keynote.  I will offer additional commentary in subsequent posts.  Maybe you see additional information and meaning in those numbers.  If so, I invite you to share your views and opinions of them.  And no, you don’t need to dim the lights, turn on the black lights, download and listen to Hair’s Aquarius to divine your view.

Finding Data July 28, 2022 Finding Data Another weekend of weeding. Dark Star - Ceanothus - A California Lilac in the picture. (Not a weed).…
Leave the House With a Clean Design September 14, 2021 Wouldn't it be great if there were something that would stop you from leaving the house wearing mismatched clothes -…
Part 6: The 2022 Wilson Research Group Functional… November 21, 2022 FPGA Language and Library Trends This blog is a continuation of a series of blogs related to the 2022 Wilson Research…

This article first appeared on the Siemens Digital Industries Software blog at https://blogs.sw.siemens.com/verificationhorizons/2011/03/25/language-transitions-the-dawning-of-age-of-aquarius/